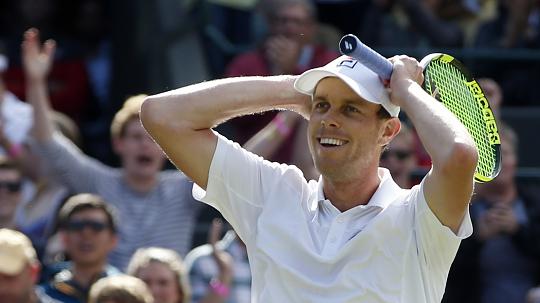 The second half of the match was not without its difficulties on Saturday. Once again both competitors had to navigate the challenges mother nature threw in their way. The match was suspended three separate times thanks to multiple rain delays.

With this victory, Querrey moves on to the fourth round at Wimbledon where he will take on Frenchman Nicolas Mahut. However, his next match was not at the front of Querrey’s mind following his defeat of Djokovic.

“It’s incredible, especially here at Wimbledon, the biggest tournament in the world. I’m so ecstatic right now, so happy. I played the break points really well. I was able to come up with a big serve when I needed it and just there in the tie-break I got a couple of errors and that was it.

I was ready for that [Djokovic’s strong start this morning]. You saw what happened in the first four games today. He is arguably one of the best ever. You knew he was mentally tough and that he was going to come back. Taking it one round at a time, not even sure who I play next. Just be happy with this and look forward to the next round a little bit.”

Meanwhile, this upset marks the end of an epic run by Djokovic. Querrey’s victory ends Djokovic’s Grand Slam winning streak at 30 matches, and marks the first time he has failed to reach the fourth round of a Major since the 2009 French Open.

This also ends his incredible streak of Grand Slam championships. He was aiming to be just the second man to win five straight Major titles and for the first time since the 2015 French Open, someone other than Djokovic will win a Grand Slam. Furthermore, Querrey became the first American to defeat Djokovic since Andy Roddick at 2009 Australian Open.

#Querry 1st American to beat @DjokerNole in a Slam since @andyroddick in 2009. #Wimbledon

American tennis is desperate for a star, and while Sam Querrey, 28, is a bit longer in the tooth, this massive victory should earn him more than a few new fans back home.