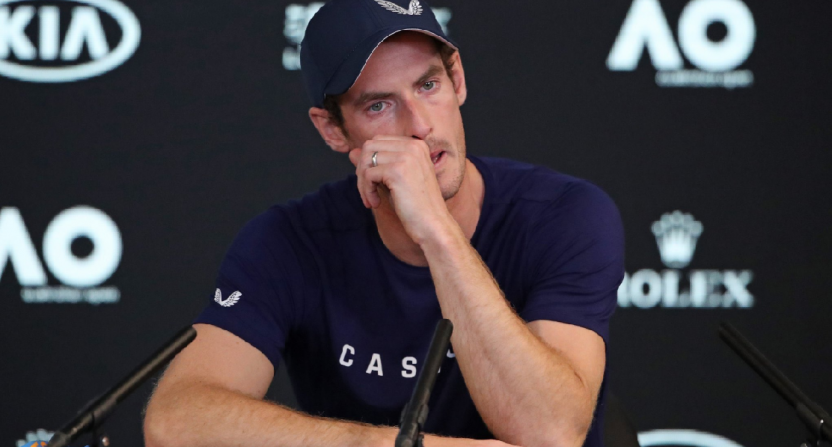 Andy Murray announced on Thursday in Melbourne that he plans to retire from tennis after Wimbledon this summer due to continuing problems with his right hip, which he had surgery on in Jan. 2018. And he’s not even sure he’ll be able to play beyond the Australian Open — which begins on Monday — if the pain is too much to deal with.

Murray, 31, was understandably very emotional while announcing the news to the media.

“I spoke to my team and I told them I can’t keep doing this and that I need to have and end point, because I was just playing with no idea when the pain was going to stop,” said a tearful Murray. “I said, look, I think I can kind of get through this until Wimbledon, that is where I would like to stop. I’m also not certain I’m able to do that.

“I can still play to a level, not a level that I’m happy playing at. But it’s not just that, the pain is too much really. It’s not something I want, I don’t want to continue playing that way. I’ve tried pretty much everything that I could to get it right and that hasn’t worked.”

… “I’m not sure I’m able to play through the pain for another four or five months. I have an option to have another operation which is a little more severe than I had before, having my hip resurfaced, which will allow me to have a better quality of life and be out of pain. That’s something I’m seriously considering.”

“Some athletes have had that and gone back to competing but there’s obviously no guarantee and it is certainly not something, the reason for having an operation like that is not to return to competitive sport, it’s for a better quality of life.”

This just really sucks for Murray and for the sport of tennis, but he’s definitely making the right choice for the reasons he said- a better quality of life. He’s still only 31 years old and shouldn’t have to put himself through debilitating hip pain that may only worsen with more tennis.

But this really is a huge blow to the tennis world. After several years of coming up just short in an era featuring a few of the all-time greats in Roger Federer, Rafael Nadal, and Novak Djokovic, Murray became a Grand Slam champion with a victory at the U.S. Open in 2012.

Murray became the world’s No. 1 ranked player in Nov. 2016. Along with his Wimbledon victory, he reached the Australian Open Final and French Open Final in 2016. Before this hip injury, he was truly an elite player, going head-to-head with as great of tennis champions as the sport has ever seen.

So, to have his career come to end at the age of 31 and shortly after being a truly remarkable tennis talent, is a damn shame. The tennis world agrees, and here are some of the tweets reacting to the news:

Andy Murray has been competing in the same era with three GOATS.

Andy Murray may have won two Wimbledon titles, the US Open, two Olympic golds and countless other individual honours.

But remember when Britain's greatest ever tennis player did this for the team…pic.twitter.com/O3EyWgdbpb

If this is true, I tip my cap to @andy_murray ! Absolute legend. Short list of best tacticians in history. Unreal results in a brutal era …… Nothing but respect here. I hope he can finish strong and healthy https://t.co/FZbwmvRC2r

When you search for examples of “emptied the bucket to be as good as they could be” there should be a picture of Andy Murray sitting under that quote. Remarkable discipline for training, competition, sacrifice, perfection, a little crazy 😃 but a legend of a bloke. Bravo Andy 👏

Andy, just watched your conference. Please don’t stop trying. Keep fighting. I can imagine your pain and sadness. I hope you can overcome this. You deserve to retire on your own terms, whenever that happens. We love you @andy_murray and we want to see you happy and doing well. 🙏

Whatever you think “emptying the bucket” means….times that by 5 and that’s who @andy_murray is. Thank you Andy – thank you for always being you. #1 https://t.co/0jQgFI5EkA