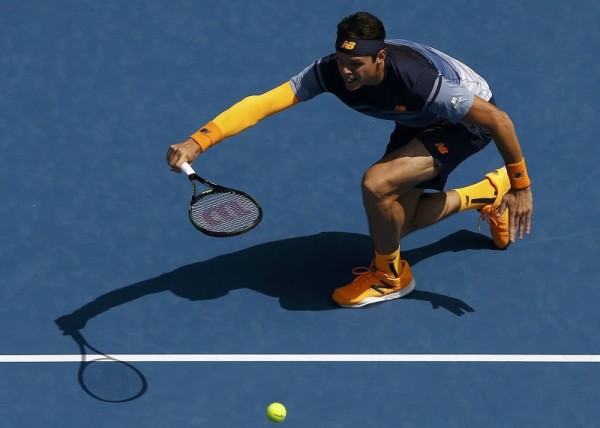 The quarterfinals are set in the 2016 Australian Open. Milos Raonic is in the final eight, Stan Wawrinka is not.

Many compelling stories emerged from Monday’s play in Melbourne, but the main story was the rise of Canada’s best tennis player at the expense of a two-time major champion who hadn’t missed a Grand Slam quarterfinal since the 2014 French Open.

Wawrinka had established a track record as a man who responds to big-stage moments, but on Monday, Raonic wrested the spotlight — and a quarterfinal berth — from his Swiss hands. Raonic advances to face Gael Monfils in Wednesday’s quarterfinals. He will be favored to make the semifinals, where a possible meeting with Andy Murray could emerge.

Raonic is offering evidence that he’s a substantially improved player, one who might not be ready to win majors in 2016, but who is likely to get a lot closer to the top tier of the ATP on a regular basis. Reaching the semifinals here — if he can do so — would mark an excellent result.

Raonic displayed a better all-court game in the first two-and-a-half sets against Wawrinka. Specifically, he was able to cover the court more effectively. He rushed the net with a greater sense of clarity and took away time from Wawrinka, who uses a big takeback on his swing to set up his world-class one-handed backhand.

Wawrinka, a regular in the latter stages of the previous six majors, has built a well-earned reputation for raising his game in major tournaments, but on this day, he was the less engaged, less vigilant player. Thoroughly outplayed for most of the proceedings, he needed a spark to turn things around. Late in the third set, he got it.

At 5-5, 15-15, in the third set, Raonic — leading by two sets and standing just two games from victory — had a chance to hit a volley, but he let a Wawrinka passing shot fly by. It landed just inside the baseline. That nervous and inaccurate response to pressure marked the start of an unraveling for Raonic, one in which he got broken in that 5-5 service game. Wawrinka then served out the third set, 7-5, creating a pressure-packed fourth stanza.

Raonic, understandably worried at the shift which had begun to emerge, failed to lift his game. Trailing 4-3 in the fourth on Wawrinka’s serve, Raonic had two break points at 15-40, but he carelessly failed to put two makeable returns in play. He gained more break points later in that game but still couldn’t convert. Wawrinka held for 5-3 and later closed out the fourth set. Raonic was taken to a fifth set, where he didn’t have the ability to win a tiebreaker. He would have to break Wawrinka’s serve to win. The odds — so favorable late in the third set — had turned against him.

A two-time major champion from Switzerland didn’t figure to let him off the hook. Yet, that’s exactly what happened. 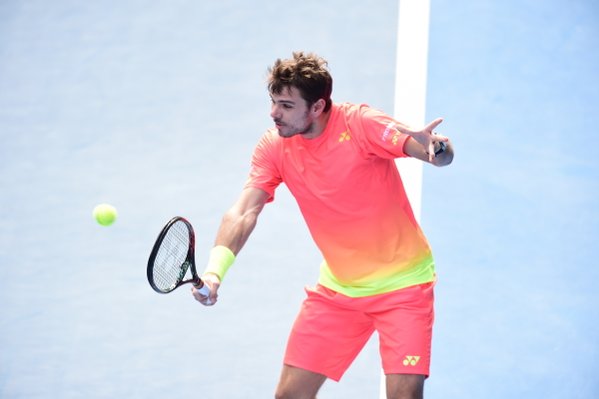 Serving at 2-3 and deuce in the final set, Wawrinka hit a big serve to elicit a short ball from Raonic. The ball landed in the middle of the court, just behind the service box, begging to be swatted away for an easy winner. Wawrinka pulled a forehand to the ad corner, but the ball went wide of the sideline. Wawrinka lost the advantage in that service game and enabled Raonic to play a little more freely. Facing break point, Wawrinka missed a down-the-line backhand passing shot — his bread and butter — to hand a resilient Raonic a 4-2 lead. The Canadian, with his serve, controlled the rest of the match. He easily served out the final set to finish off a 6-4, 6-3, 5-7, 4-6, 6-3 victory.

The biggest question to flow from the match is if Raonic’s victory in five sets — under adverse circumstances — might counterintuitively feed his confidence more than a straight-set romp. By having to fight his demons against a highly accomplished opponent, Raonic might realize that his competitive chops are better than even he might have suspected. The group of players in the 23-to-26 age range has utterly failed to announce its presence on the ATP Tour. With Andy Murray and Novak Djokovic turning 29 later this season, everyone is wondering if the next wave of pros will start to challenge Murray, Djokovic, Nadal, and 34-year-old Roger Federer for supremacy in men’s tennis.

Wawrinka might not be as historically consistent as the Big Four, but he’s certainly better than everyone else on tour. Raonic’s win over the 30-year-old Swiss creates a fascinating storyline for the remainder of the 2016 tennis season.

Elsewhere in the men’s tournament, Andy Murray managed to get through another match in the face of weighty off-court developments. Not only is Murray’s wife, Kim Sears, expecting a baby in February, but Murray now has to deal with his father-in-law’s health scare in Melbourne. Some distractions are media-fed and thereby easy to brush aside, but these are matters of real life, truly more important than a tennis match. Nevertheless, Murray dismissed big-talking Australian Bernard Tomic in straight sets. Murray will next face David Ferrer, a familiar presence in major quarterfinals. The Spanish veteran eliminated the last American man in the tournament, John Isner, in another fourth-round match.

Don’t feel too bad for Isner, though: Monday might have been personally disappointing in a tennis sense, but the native North Carolinian had to revel in the fact that his beloved Carolina Panthers earned the second Super Bowl appearance in franchise history with a win in the NFC Championship Game. 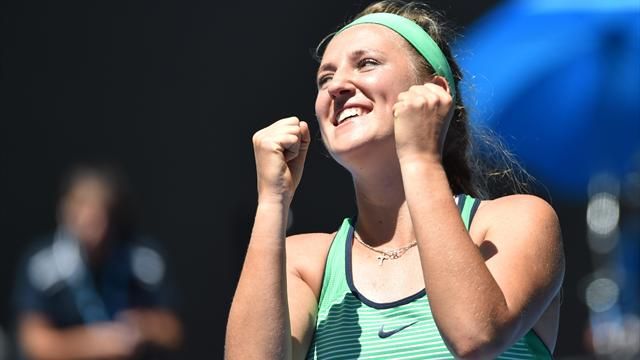 Elsewhere on Monday, Victoria Azarenka was thrilled to reach the quarterfinals without losing a single set in this tournament… and in 2016. Speaking of the NFL, Azarenka was also thrilled to learn about a football result during her stay in Melbourne. She exulted during an on-court post-match interview, when she learned that her beloved Denver Broncos will head to Super Bowl 50.

It’s a good time to be Azarenka. Not only is she extremely healthy and playing efficient tennis — she blasted Barbora Strycova off the court in the fourth round, 6-2 and 6-4 — but the bottom half of the draw has opened up for her. No. 2 seed Simona Halep and No. 8 seed Venus Williams were dismissed in round one. Monday, No. 21 seed Ekaterina Makarova — who had reached the Australian Open quarterfinals in three of her previous four appearances — bowed out of the tournament.

In a fierce scrap which featured howitzer-grade groundstrokes, Great Britain’s Johanna Konta — a rapidly-rising player on the WTA Tour — met the moment and snatched a coin-flip of a third set from Makarova, 8-6. Konta is approaching the top 30 of the rankings with very few points to defend in the next several months. She also made history for women’s tennis in the United Kingdom:

What’s even better for Konta is that she’ll be favored to make the semifinals.

Konta’s opponent is one of the most remarkable stories of the tournament, 133rd-ranked Shuai Zhang, who is 4-0 in the Australian Open after failing to win a single main-draw match in 14 previous major-tournament appearances. Zhang did need her fourth-round opponent, American Madison Keys, to suffer a mid-match leg injury, but the Zhang of two or three years ago would not have taken advantage. This is a new and resolute player, one who is basking in the flow of a first major quarterfinal. Konta-Zhang is a matchup absolutely no one could have imagined before this tournament began.