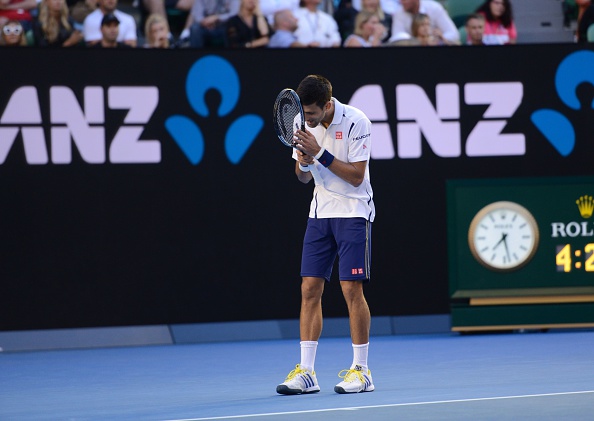 Unlike day six, Sunday’s action in Melbourne at least had the decency to give us several winner-take-all sets and some heightened drama.

That being said, the quality of play on the first day of fourth-round matches still meandered heavily. There were some thrilling moments, a lot of grinding for some big names, and ultimately little in the way of actual upsets. This was best exemplified in Novak Djokovic’s exhausting, mind-numbing duel with France’s Gilles Simon.

Djokovic produced an absolutely atrocious match — probably a D-minus by his standards — but the top seed outlasted the 14th-seeded Simon in an interminable 4-hour, 35-minute match in Rod Laver Arena.

If you were snowed in on the East Coast and watching during the wee hours, this match probably just exacerbated your cabin fever. It was a thoroughly compelling match that made your skin crawl. Simon, one of the ATP’s premier counterpunchers, was basically a backboard all evening — he frustrated an unfocused Djokovic. It made for endless hitting sessions, with the players covering a lot of distance but rarely commanding points.

The above clip only showed about half of the total point, which lasted nearly a minute. This actually was perhaps the most exciting rally of the afternoon. The way it ended was emblematic of the match, as points were often decided by who got sick of hitting the same shot 10 times in a row and then missed a would-be winner.

For crying out loud, Djokovic committed 100 unforced errors! This was the most redeeming part of the match for viewers: a legendary triple-digit tally of missed shots for perhaps the best player of this generation. It wasn’t even mere execution or hitting from bad angles which caused them. Djokovic stubbornly tried more than a dozen backhand drop shots (almost all of them from the ad court), and most failed miserably. After the match, a fan yelled “No more drop shots” during Djokovic’s on-court interview and he responded, “I hate to say this, but you’re absolutely right.” These failures were so abundant that ESPN even threw together a compilation of them.

Many thought Fernando Verdasco’s 91 “UFEs” in his first-round triumph versus Rafael Nadal were outrageous, but Verdasco balanced those errors with a slew of winners. Djokovic wasn’t nearly as overpowering. He missed 11 — ELEVEN — break points in the second set, converting none. He was just 6-of-25 for the match (so close to Kobe Bryant’s most infamous shooting night).

More than the stats, Djokovic’s concentration seemed to wax and wane, leaving an eerily-subdued facsimile of himself struggling to muster the kind of clutch-point execution he typically delivers.

Despite it all, the match may have been a net positive for Djokovic. Grand Slam tournaments are two-week, seven-match marathons, and it’s exceedingly rare for even an all-time great to avoid an off day. We’ve seen so many examples of this in recent years, be it Roger Federer’s third-round five-setter at 2012 Wimbledon en route to his last Slam title; Marin Cilic surviving Simon in the fourth round of the 2014 U.S. Open; or Djokovic himself needing five sets against Kevin Anderson in the fourth round at the All-England Club last year.

All of those matches came before the quarterfinals against vastly underseeded players. These struggles will happen even in the course of a championship run. Plus, Djokovic typically breathes fire after one of these lackadaisical performances. As our own Matt Zemek said, Kei Nishikori better look out in Tuesday’s quarterfinal against Djokovic. It can’t be more frustrating than what Simon and Djokovic subjected viewers to in this all-timer of a slog-fest. (“Slugfest” would have been too generous a description.) 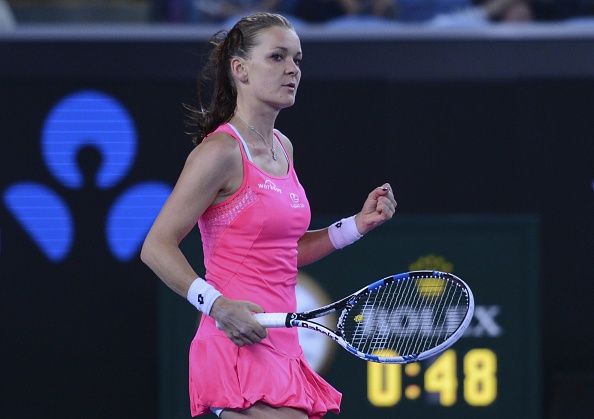 Djokovic’s five-set escape got the most attention on Sunday in Australia, but the match of the day was easily a three-set thriller between No. 4 seed Agnieszka Radwanska and 21-year-old upstart Anna-Lena Friedsam in Hisense Arena. Radwanska prevailed, 6-7 (6), 6-1, 7-5, in a topsy-turvy match, coming from behind following a first-set tiebreak loss and a 5-2 deficit in the third set.

Radwanska forced the opening-set tiebreak by winning five of seven games after Friedsam jumped out to a 4-1 advantage. Friedsam’s down-the-line forehands and crosscourt backhands tormented Radwanska all evening, pushing the top-five player well beyond the straight-set breeze of her first three matches Down Under.

Radwanska bounced back, asserting herself in an easy second set and then jumping out to a 2-0 lead in the decisive third act. However, after that run in which the No. 4 seed won eight of nine games, Friedsam forcefully caught a second wind and reeled off five games in a row. At that point, Radwanska was struggling to handle the unseeded German’s punishing groundstrokes.

A tragic fate intervened on her behalf.

Cramps creeped in for Friedsam midway through the set and rendered her nearly immobile by the time Radwanska evened it up at 5-all. At that point, Friedsam couldn’t even push off on her serves. She was in tears as the chair umpire issued a time warning and subsequent point penalty that gave Radwanska a break point without having to swing her racquet.

Radwanska, still looking for her first Grand Slam title at age 26 (which is middle age for most tennis players), moved into the quarterfinals in Melbourne for the fifth time in six years. Perhaps as importantly, she defended her quarterfinal rankings points from last year and has a favorable matchup in Carla Suarez Navarro awaiting her on Tuesday. A semifinal appearance is ripe for the taking.

Unfortunately for Radwanska, her half of the draw is not as wide open as you’d expect. Even though the WTA bracket was decimated by upsets in week one, they were mostly confined to the bottom portion of the draw. Her semifinal opponent (should she beat Suarez-Navarro) comes from this matchup:

“I’ll look forward to playing the best in the world and it’ll be a great match.” @MariaSharapova on playing Serena pic.twitter.com/t96vw0w4ku

Okay, it theoretically could be Maria Sharapova, but she’ll have to overcome Serena Williams in a quarterfinal showdown. Both players cruised through their fourth-round matches on an unseasonably cool Australian summer afternoon. Williams wasn’t even on the court an hour in a 6-2, 6-1 win over Margarita Gasparyan, while Sharapova needed a pair of 7-5 sets to defeat Belinda Bencic.

We’ll see just how much Sharapova actually wants to face Williams, a juggernaut still at the height of her powers who has owned the Russian through the years. Williams flaunts an 18-2 all-time record against Sharapova (6-1 in Grand Slams) and hasn’t lost to Sharapova since 2004.

It’s a rematch of last year’s Australian Open final, when the American pummeled Sharapova in the first set before surviving a second-set tiebreak for the first of three 2015 Slam titles. Sharapova’s form has been solid enough this week, but there’s little reason to think she can change the course of this rivalry come Tuesday. 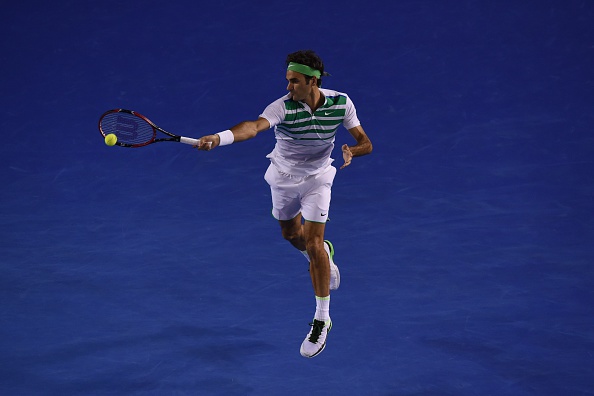 The 34-year-old Roger Federer continues to look the part of a contender at the dawn of a new season. He and No. 15 seed David Goffin were the nightcap on Rod Laver Arena, as the Djokovic-Simon crawl pushed their match back to a late start, after 10 p.m. local time. No matter for the old man on tour.

Federer rebounded from a bit of a struggle with Grigor Dimitrov on Friday to dismantle Goffin in three easy frames. It took Federer less than 50 minutes to win the first two sets, and he broke Goffin multiple times in all three sets. On the broadcast, ESPN analyst Brad Gilbert called it “a clinical beatdown,” and Goffin, who grew up idolizing Federer, still seemed starstruck playing his tennis hero.

As nimble on his feet as ever, Federer has mastered the craft of preserving his body at this stage in Grand Slam tournaments. He’ll need to be fresh for a potential semifinal showdown with Djokovic, and the 1:29 romp Sunday might as well have been a mild practice. It’s a good omen for Federer as he attempts to claim that elusive 18th Slam title.