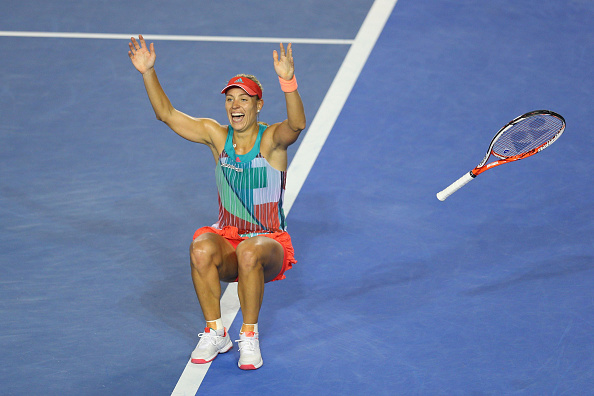 Every so often a sporting event becomes more than just a surprise.

Your reaction to the proceedings becomes its own theater, a mixture of genuine shock and total intrigue. Everything else in the world fades to the background. You’re captured by this one event, locked in tunnel vision for the greatness you’re witnessing.

Angelique Kerber and Serena Williams delivered such drama on Saturday in an extraordinary, rousing display of competition and humanity.

Kerber may have been No. 6 in the world, but Serena Williams was aiming for Steffi Graf’s total of 22 Grand Slam titles. Moreover, Serena had won eight straight Slam finals and established, beyond all doubt or questioning, the best track record in women’s tennis in championship matches. Kerber, a 28-year-old German, was making her first appearance in a major final, and had made it past the fourth round at a Slam event only once since 2012. Kerber was trying to become the lowest seed to win the Australian Open since Serena herself in 2007. The gulf between the two couldn’t have been more enormous.

Yet there Kerber was, not only beating Serena Jameka Williams, but truly making the moment about her own game, her own return of serve and overall defensive dominance. Kerber lent the match its heft and texture, with an upstart seizing the stage from the 21-time Grand Slam champion.

It was a total mental and physical gauntlet Kerber had to go through for her first major title, and it didn’t start with Serena. She survived a match point in the tournament’s very first round, overcoming a history of losing to lower seeds. She then beat two-time Aussie Open winner Victoria Azarenka (the No. 2 favorite behind Serena when the event’s second week arrived) in the quarterfinals. Kerber’s previous record against Azarenka and Williams entering Wednesday’s round of eight? 1-11.

Kerber’s achievement was only heightened by Serena’s effort in defeat. Williams was poor by her standards as Kerber took the opening set and erratic while unable to establish her serve in the decisive third set. In between, Williams rolled to a second-set victory and forced all the pressure onto the player who hadn’t been there some 25 times before. Many a player — think Lucie Safarova last year at the French Open or Garbine Muguruza at Wimbledon — had wilted in the face of Serena’s indomitable presence in this very situation, playing Serena in a first major final appearance.

For once, Serena’s defeat said far more about her opponent than her own shortcomings. Kerber lifted her play beyond what she’d shown, both physically and mentally, earning newfound respect from sports fans the world over.

Kerber played the angles all night, forcing Serena away from the center of the court and frustrating Williams by chasing down everything. There was just no way for Serena, sans her absolute A-game, to consistently pass Kerber. This dynamic translated into the biggest points. Kerber claimed dozens of absolutely mesmerizing rallies, many during a classic third set in which she broke Williams’ serve a stunning three times. The 28-year-old may have been the rookie in this situation, but she played the poised, patient tennis that eludes so many against Serena.

Kerber, who will move to No. 2 in the world on Monday, won an unthinkable 44 percent of return points against the most dominant server in the modern game. Serena’s serve was shaky all night and her footwork was spotty coming toward the net. Kerber made her pay for all of it. The defense on display was frankly breathtaking, a treat for those who’ve waited to see the German combine her counterpunching excellence with steely nerves. It was undoubtedly the match of her life.

These moments become part of our sporting lore, a reminder that players can always rise above their past, reshaping careers which don’t have to remain captive to an easy narrative. Kerber was the latest — and a most welcome — reminder of this axiom.

For Serena Williams, the chase for 22 continues. She was thwarted by Roberta Vinci at the U.S. Open last year, and now serendipity struck Down Under. Kerber, like her idol Graf, is from Germany. She talked about wanting to “protect” her fellow German’s singular achievement. It’s just extra salt in the wound for Williams, who remains this era’s supreme champion yet still acutely suffers the sting of a defeat which rarely visits her on this stage.

Serena still is — even with this loss — the greatest closer women’s tennis has ever known, the sport’s equivalent of Mariano Rivera of the New York Yankees. Serena entered this match with a gleaming 21-4 record in major finals. She twice lost to her sister, Venus Williams, at Wimbledon. Her other two losses were surprising, but even in 2004, when Maria Sharapova knocked her off at Wimbledon, there was a sense the young Russian was going to become a superstar. Only at the 2011 US Open did Serena lose in an unfathomable way, as Samantha Stosur also played the match of her life.

Angelique Kerber not only matched, but exceeded, Stosur’s feat four and a half years later. It is a result which will ripple through the pages of time, as Serena’s major final record moves to 21-5.

Unlike certain dry periods earlier in her career, the desire and will are there for Serena — her first-set nerves were proof enough. The next step is all about containing the tension and pressure that had her yelling after nearly every winner while Kerber played the more composed tennis. There’s an admittedly difficult but notable blueprint to beating Serena in Slam finals: Win the first set. Williams is now 2-5 in such championship matches when she loses the opening set.

It would be thoughtless, however, to only mention the tennis on display inside Rod Laver Arena, as though that represented the entirety of the story in Melbourne.

Sure, Williams and Kerber crafted a supremely compelling competition, but these players provided something more intangible. Plenty of sporting events occur in this era between loathsome individuals or institutions. It’s a cognitive dissonance that’s hard to ignore.

I’m not professing here that Kerber and Williams are saints, that I know who they are fundamentally. Nor am I suggesting that tennis is free from the perils of its sporting brethren.

That said, both players showcased a wonderful sense of togetherness in the shared theater of sport. They radiated genuine mutual respect and created a warm-hearted competitive vibe that actually accentuated their on-court performances. The duo was constantly clapping for each other after exceptional points. Serena gave Kerber the most emotional and sincere hug I’ve seen from a championship-match loser. Sure, Williams was hurting after losing a milestone match, yet she and Kerber were open and heartfelt in their post-match remarks and press-conference interviews.

Tennis puts losing players of title matches on the stage in a way few other sports do. Serena, instead of absorbing the sting of defeat, poured that energy and effort into recognizing the work Kerber brought to this moment. It made the occasion that much more memorable for the new champion, not to mention a worldwide audience.

Kerber was in the throes of raw elation, an endearing figure experiencing the greatest moment of her career in front of millions. It was unscripted joy, a rare thing to witness from a professional athlete in a public setting. Williams was entirely graceful in defeat, a reminder that empathy and appreciation can exist alongside great pain.

This was one of the least cynical big-time sporting events I can recall.

Great moment, Serena looks as happy as Kerber does pic.twitter.com/BUl3EBmbIG

Angelique Kerber’s ascent to the top of the tennis mountain was wholly unexpected, and it was all the more rewarding because of its shock value. She took Serena Williams’s punches and had even better answers. Serena can’t say she “didn’t lose” like she did after the Vinci defeat last September, precisely because Kerber rose to Williams’s level. This wasn’t about Serena losing hold of a match; this was about the challenger wresting it away from a generationally great champion.

That kind of upset rewards all parties so much more than a Goliath crashing to the earth. Kerber put aside the spectacle, shrugging off the intimidation she easily could have felt. She shelved the pressure of the occasion and quieted the indecision which had marked the previous several years of a career that has now been transformed.

Angelique Kerber had always been a fragile underachiever in this sport. That statement was true not even a week ago. She’s now the Australian Open champion.

Things change quickly in tennis. Because that truism is so constant, a match like this is possible, when greatness gives way to awe and we are fortunate enough to see a player summon her best above all doubt and against all odds.