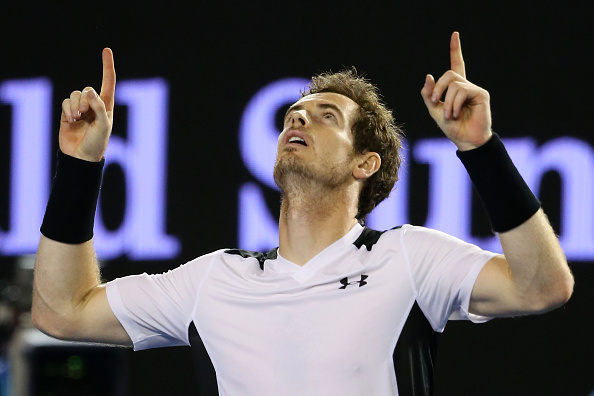 A recap of Andy Murray and Milos Raonic’s tense five-set semifinal, just as soon as Murray finishes sawing off the Commonwealth of Australia, Bugs Bunny style.

Clearly, Murray was pumped about this one, and he had every right to be. Raonic took it to Murray for the better part of four sets, bludgeoning the Brit with a powerful serve and winning a third-set tiebreak.

But Murray’s the No. 2 seed and a two-time Grand Slam winner for a reason. Even when Raonic had him on the ropes, Murray mustered enough defense, created enough break points and played with necessary gusto to overcome a compromised Raonic in fifth set by a 4-6, 7-5, 6-7, 6-4, 6-1 scoreline — some four hours worth of tennis.

It makes for Murray’s fifth Australian Open finals run in seven years, a staggeringly consistent stretch blunted only by losses to Novak Djokovic — who awaits him for Sunday’s final — in the past three appearances.

Friday’s match stands on its own merits, though, as Murray had to dig deep in his reservoir to survive. Murray ran far more than Raonic, but the Canadian’s serve-and-volley service style meant the outing was more mentally grueling than anything physical.

This was only amplified by this fortnight’s off-court proceedings. Murray’s wife, Kim Sears, is pregnant and could theoretically go into labor at a moment’s notice. Murray has said he would return home immediately in that case, so it’s certainly weighing on his mind. Plus, her father and Murray’s father-in-law, Nigel Sears, collapsed while coaching Ana Ivanovic’s third-round match a week ago.

With all that noise, it would have been easy and entirely understandable for Murray to fold the tent down a set with Raonic’s serve in dominant form. Murray didn’t exactly have his best stuff between the lines, but he summoned an entire tournament’s worth of resolve inside Rod Laver Arena. It’s another obvious example why he’s an entrenched top 5 player and Raonic is still merely on the cusp.

That’s not to disparage Raonic. The No. 13 seed produced an exemplary run in Australia, beating Roger Federer to win the Brisbane warm-up event and nearly making his first Grand Slam final by taking down the No. 2 player in the world. Perhaps he will still parlay this into a great 2016 season, but this one will sting for a long time.

Raonic bullied Murray in the opening set, breaking the Brit right off the bat. He followed that up by surviving three break points in his first service game. Absent a dip late in the second set, Raonic controlled the run of play. His return game wasn’t as potent as its been the rest of this tournament, but he won 80 percent of service points in the first four sets. On top of that serve, he established a strong tactical approach and stuck to it while executing at the net and showing some fortitude of his own. It was a breakthrough match in the making.

He even seemed to have a defining moment, saving some brilliant Murray defense up 5-4 in the third-set tiebreak. Unfortunately, his body failed him. Raonic was treated for a right-leg issue early in the fourth set, dulling just enough speed on his towering serves to allow Murray a crucial break. Raonic was still good enough to earn some break points of his own late in the fourth stanza (the Murray GIF above was his reaction to saving two break points up 5-4 in the set).

Once Raonic couldn’t break back and prevail in four, the fifth set was a formality. Raonic was grimacing on every groundstroke and was noticeably two steps slower across the court. Even his serve could not save him anymore. Usually as reserved as they come on court, Raonic let loose after dropping the set’s second game.

It’s a blow not only to Raonic, but also to an entire generation of ATP players — the so-called “Lost Boys.” Often lost in the shadow of Djokovic, Federer, Murray and Rafael Nadal is that no up-and-coming players have emerged as a serious and consistent Grand Slam contender. No man born in the 1990s has won a Slam title, an almost unheard development for young tennis talent even five years ago.

Raonic was right on the cusp of changing that. The 6-foot-5 Canadian is the highest-ranked of just seven such players in the ATP top 30, and he probably remains the best hope of the bunch to earn a Slam title in the short-term. The window for Grand Slam finals spots in this era of legendary players remains narrow, and Raonic will be hard-pressed to put himself in such great position again.

It’s Murray who claimed a finals spot on Friday, but it’s all coming up Novak Djokovic. Not only did the Serb play a day earlier, but this five setter should drain some of his rival’s reserves. You’re not beating Djokovic in straight sets in a best-of-five scenario right now, and the World No. 1 is already in superior form the later a match goes. Murray prevailed in this semifinal, but it’s impossible to know how much is left in the tank.

The other factors beyond endurance would suggest a rout, anyway. Djokovic owns a 21-9 edge in the series, including wins in 10 of the last 11 meetings over Murray. He destroyed Federer for two sets on Thursday, and then casually handled every crucial point in the fourth and final set of his semifinal victory.

Djokovic is the absolute behemoth of the here and now, claiming four of the last five Australian Open titles and three Grand Slam titles in 2015. Murray hasn’t even managed to reach a fifth set in three previous finals losses Down Under against Djokovic.

So, Murray indeed showed a ton of mettle just reaching the finals.

The payoff for such perseverance doesn’t figure to be as satisfying.