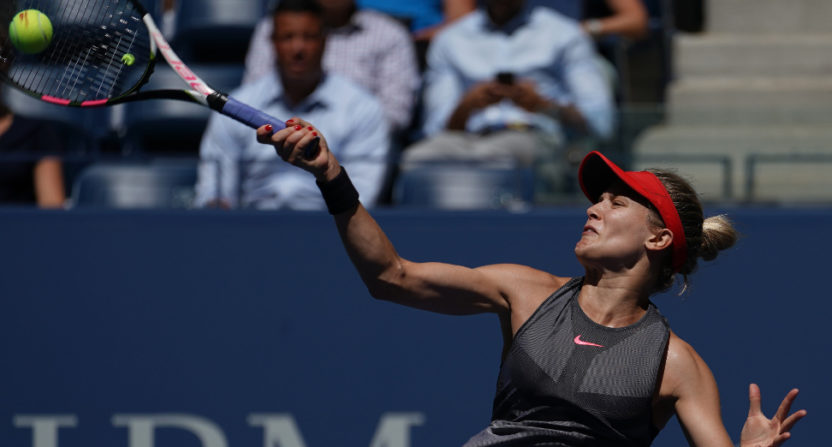 The United States Tennis Association could wind up having to pay millions to Canadian tennis star Eugenie Bouchard. In September 2015, Bouchard (seen above at least year’s U.S. Open) slipped and fell in the dark on a chemically-cleaned floor in the training room at the 2015 U.S. Open at the Billie Jean King National Tennis Center in New York City. That fall led to chemical burns and a concussion for her, and she filed a lawsuit against the USTA six weeks later. The lawsuit went to trial this week before a federal jury in Brooklyn, and that jury found the USTA 75 percent liable for Bouchard’s fall Thursday, with her bearing the remaining 25 percent liability. This came one day after Bouchard reportedly delivered quite the testimony about the fall, where she both hit her head and wound up covered in chemicals:

“I screamed, ‘Oh my God, it burns!’” Bouchard testified of slipping on chemical cleaning spray and falling flat on her bare back as she headed to take a post-match ice bath.

…“I was wearing a sports bra … my back was on the floor,” she told a jury, recalling how she realised her skin had come in contact with “strong chemicals, because of the burning”.

“It was all over me,” she said of the chemicals.

As per Ben Rothenberg of The New York Times, this was a chemical being used for the first time at the U.S. Open:

The heavy-duty cleaning product, Oasis 299, had not been used at the United States Open before that night. HP Products, the manufacturer of Oasis 299, says contact can cause “severe skin burns” in its safety data sheet on the product.

This happened around 11 p.m. at night, after Bouchard won a mixed doubles match with partner Nick Kyrgios, and told a trainer she would return to take an ice bath after doing post-match media appearances and cooldown stretching. USTA lawyer Alan Kaminsky argued that there’s an understanding or rule players aren’t supposed to use the training room without trainers present, but Bouchard said players regularly return to obtain drinks or other materials, saying “It’s part of the locker room, and it’s our room where we can come and go as we please,” plus trainers “encourage us to go in when they’re not there.” Bouchard’s lawyer Benedict Morelli also showed that no such rule was codified in informational or instructional materials.

The trial will move into determining damages Friday. Those could be significant; the 23-year-old Bouchard was ranked as high as No. 5 in the world in 2014, and while her ranking wasn’t as high by the time of the fall, she was on an impressive run in the U.S. Open, reaching the fourth round in singles as well as advancing in doubles and mixed doubles. But she withdrew from the tournament thanks to the concussion here, and her on-court performance hasn’t been too strong since. She’s currently ranked 116th in the world. Bouchard’s side will likely try to argue that this incident played a major role in her performance struggles and the earnings and endorsement losses that resulted, while the USTA will likely argue that she was already facing struggles before it. In any case, though, the amount of money here is likely to be pretty significant, and the determination that the USTA is 75 percent at fault could make this a costly result for them.