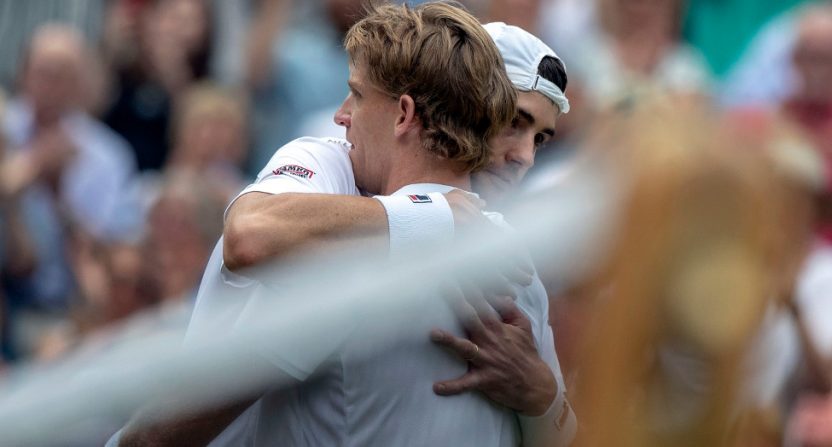 American tennis star John Isner has had plenty of success over the years and is ranked ninth in the world, but he’s maybe most known for the epic matches he sometimes winds up in at Wimbledon (which has no fifth-set tiebreaker, allowing for crazily long matches). In 2010, he beat Nicholas Mahut 6–4, 3–6, 6–7, 7–6, 70–68 in the first round in an 11-hour, five minute match (the longest match in tennis history), and in 2016, Jo-Wilfried Tsonga beat him 6-7, 3-6, 7-6, 6-2, 19-17 in the quarterfinals in a match that took four hours and 24 minutes. On Friday, Isner again came out on the wrong side of a long match, this time even further into the tournament and to an old friend and rival.

South Africa’s Kevin Anderson (seen above hugging Isner after the match; Isner is in the hat) beat Isner 7-6, 6-7, 6-7, 6-4, 26-24 Friday in a semifinal match that lasted six hours and 36 minutes, the longest major match ever at the semifinals or beyond and the second-longest major match ever (behind only that 2010 Isner-Mahut match). The next closest matches are the 6:33 Fabrice Santoro-Arnaud Clement battle in the first round of the 2004 French Open and the 5:53 Novak Djokovic-Rafael Nadal 2012 Australian Open final. And after the marathon match, Anderson told the BBC was more feeling for his friend than excited about going to his first Wimbledon final.

“Playing like that in those conditions, it was really tough on both of us. I mean, at the end, you feel like this was a draw between the two of us. But somebody has to win. And John’s such a great guy and I really feel for him, because if I’d been on the opposite side, I don’t know how I you can take that after playing for so long and coming up short. I apologize if I’m not more excited right now, there’s just so many mixed emotions.”

Anderson went on to say “Getting through something like that is quite a thing,” and then had high praise for Isner’s role in his own career. The two faced each other on the junior circuit and then wound up facing each other in the NCAA finals in 2007, with Isner’s Georgia team defeating Anderson’s Illinois team and Isner beating Anderson in one of the crucial matches. Anderson told the BBC Isner’s often motivated him to keep working on his own game.

“He’s really pushed me throughout my career as well, he’s had such a great career, and lots of times I’ve pushed myself harder because of the success he’s had. And all I can say is congrats to John on such a great tournament, semifinals here is a remarkable achievement, and hopefully he can come back stronger very soon.”

At any rate, Isner gave us another Wimbledon match that will be long-remembered. Even if it didn’t work out for him in the end.