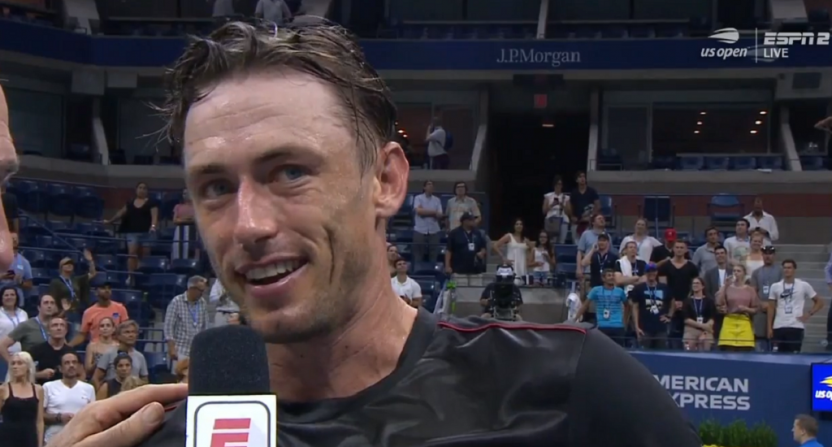 Before Monday night, few people had heard of John Millman. The 29-year-old Australian tennis player had a 43-58 career singles record. He’d never beaten a top-10 player. His highest career ranking was 49th, and he entered his match on Monday night at the U.S. Open ranked 55th in the world.

That match was against Roger Federer, owner of a men’s record 20 grand slam titles and winner of this year’s Australian Open.

Well, Millman shocked the world and upset Federer, without even needing five sets. Millman dominated a fourth-set tiebreak and won the final three sets to pull off the stunning 3-6, 7-5, 7-6, 7-6 victory over Federer in Round-of-16 play at Arthur Ashe Stadium.

There hasn’t been a moment anything like this in John Millman’s tennis career, and odds are very strong that there won’t be another moment like this. He immediately went from a no-name to the big story in sports on Monday night (technically Tuesday *morning* by the time the match ended). He’ll be the talk of the tournament in the coming days. He’ll return to Australia a sports hero.

Summarized: this was a massive, life-changing night for Millman.

And moments after the victory, at 1 AM ET, Millman spoke with ESPN’s Brad Gilbert. After a brief conversation about the win, Millman said how he needs to get out of there and go to sleep… so he can get up for his fantasy football draft at 7 AM.

“It’s 1 o’clock now. I probably should try to get a recovery. I’ve got a 7 o’clock in the morning fantasy draft. So, I’m going to get up for that, and hopefully I have a good draft. I’m second pick. I don’t know whether to go [Todd] Gurley or Le’Veon Bell.”

The important things! And John, you’ll be in very good shape with either Todd Gurley or Le’Veon Bell (not to mention one of them will likely be off the board). Try not to stress too much over that and maybe enjoy beating the greatest men’s tennis player of all-time in the U.S. Open.

After Millman’s very early fantasy draft on Tuesday, he’ll try to get some more rest before taking on Novak Djokovic in quarterfinal action on Wednesday at the US Open.