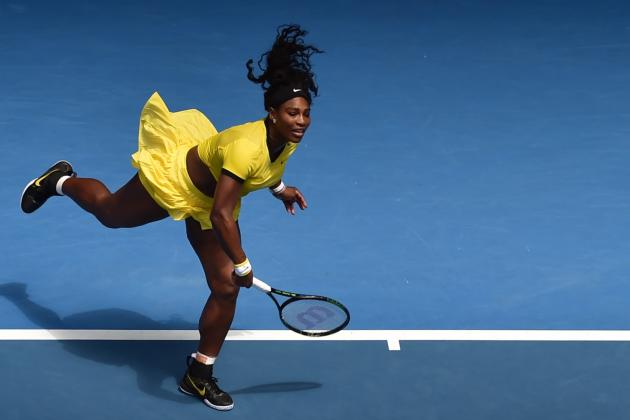 To appreciate Serena Williams’s 18th straight win over Maria Sharapova — achieved on Tuesday in the Australian Open women’s singles quarterfinals — you need to take a journey into the recent past.

One year ago, the Australian Open concluded with a magnificent match between two women who — though owning very different amounts of major trophies (21 for Serena, 5 for Sharapova) — have both attained the career Grand Slam, winning all four of tennis’s most prestigious tournaments.

In the 2015 Australian Open women’s singles final, Serena narrowly defeated Sharapova, 6-3, 7-6 (5), in one of the best women’s tennis matches of the year. Sharapova is usually cowed into a state of surrender against Serena — usually by Serena, sometimes by the occasion. In that 2015 final, however, Sharapova walked off the court knowing that while she lost, she stood up to Serena and was simply beaten by a few extra shots, the proverbial “handful of points” which decide a legitimately close match.

The memory of that match gave neutral parties and emotionally detached analysts a legitimate reason to think this 2016 reunion in Melbourne was going to be competitive. What also lent some intrigue to this match is that Sharapova, not Serena, entered the quarterfinals with more aces than any other WTA player (52).

One other match from the 2015 Australian Open was cited as a reason for Sharapova to be hopeful. It really didn’t carry that much legitimacy, but the point is worth raising for reasons you’ll soon see.

In the 2015 men’s quarterfinals in Melbourne Park, Tomas Berdych snapped a 17-match losing streak to Rafael Nadal. It was possible — in living color — for a player to carry the baggage of a very long midnight hour and somehow create a bright morning of renewal. Nadal was the established champion, Berdych always in his shadow, but on that day a year ago, the Czech upended the 14-time major champion.

The real reason that match is worth citing — more relevant to this Serena-Sharapova reunion than anything particular to Berdych or the cessation of a 17-match losing streak — is that Nadal was not physically whole.

Rusty in general but also with his appendix newly removed in autumn of 2014, Nadal was weaker, such that Berdych had an advantage he ordinarily didn’t possess heading into a meeting with the Spanish legend. That last detail helps inform what happened on Tuesday between a great player (Sharapova) and someone who inhabits a dramatically higher realm of greatness (Serena).

Serena won a contentious and generally messy first set, 6-4. Sharapova’s serve simply didn’t hold up long enough or well enough to fundamentally alter the balance of power between the two women. Sharapova served her way out of trouble at 3-4, 15-40, to hold for 4-4, but at 4-5, her serve just wasn’t reliable or potent on deuce points. Serena repeatedly created break points and finally converted one to take the lead.

Most spectators inside Rod Laver Arena probably felt the match was over, but then Serena was visited by a trainer and a doctor, evidently feeling unwell. Tennis might have been a relatively genteel sport a century ago, but it is a punishing sport in its modern iteration. Several WTA players entered this tournament in less than complete health, Serena being one of them. Sharapova had to pull out of last summer’s U.S. Open with a right leg injury. Serena’s opponent in the upcoming Australian Open semifinals, Agnieszka Radwanska, benefited from cramps on the part of her opponent, Anna-Lena Friedsam, late in a fourth-round match that could have gone either way.

The point is plain, and the connection with Berdych-Nadal 2015 is not that hard to make: If one legend of the sport was physically diminished, enabling one 17-match winning streak to come to an end in 2015, the same thing could have happened a year later.

What did Serena Jameka Williams do after that visit from the trainer and doctor?

She dominated her first service game in the second set, such that Sharapova could barely put a return of serve in court. Serena hit a series of devastating serves and didn’t have to do any work beyond that. It’s the perfect way to play when not feeling well: win points with one or two strokes at the most.

Serena just kept winning games and points with ruthless efficiency. If she wanted to get off the court quickly, she succeeded, attaining a level of focus not present in an error-strewn first set.

Serena, in the second set — especially when she forged the break of serve which blew this match wide open — played masterful points such as these:

Notice that these two points offered different demonstrations of Serena’s holistic excellence. In the first point, she read where Sharapova was going to hit a shot and used her attention to detail to turn a defensive position into an offensive one. In the second point, Serena used power and tactical awareness to seal the break and a 2-0 lead which she turned into a 5-0 advantage. The finish line was near, and Serena soon crossed it in a 6-4, 6-1 triumph.

The first set was sloppy, and it’s where Sharapova most centrally lost the match. However, when her health could have hijacked her performance in set two, Serena dominated so that she wouldn’t have to stay on court any longer than necessary.

What words can describe that kind of performance under uncomfortable and inconvenient circumstances?

One doesn’t have to get fancy in characterizing the work product of Serena Williams: She plays like a 21-time major champion.