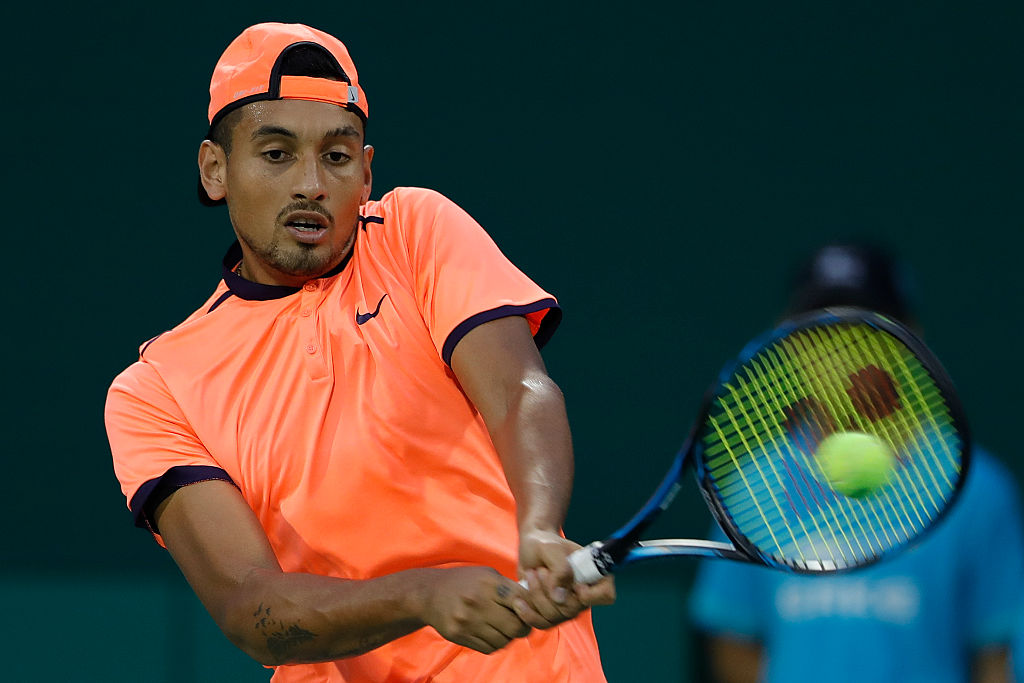 After a lengthy back-and-forth affair revolving around Nick Kyrgios’ actions last week at the Shanghai Masters, the tennis star has finally been suspended.

During the Shanghai Masters last week, Kyrgios, 21, insulted fans and reportedly “tanked” a match against German tennis player Mischa Zverev. As a result, Kyrgios has been banned for eight weeks and fined $25,000. The eight-week ban effectively ends Kyrgios’ season.

After the loss to Zverev, Kyrgios also threw some shade at the fans in attendance.

“What does that even mean? I’m good at hitting a tennis ball at the net. Big deal. I don’t owe them anything,” he said. “If you don’t like it, I didn’t ask you to come watch. Just leave.”

This was just another issue the ATP had to deal with when it launched an investigation into his match with Zverev. The investigation resulted in the suspension and fine, as it was determined that Kyrgios engaged in “conduct contrary to the integrity of the game.”

The 6-3, 6-1 defeat featured Kyrgios serving easy balls over the net and turning away from Zverev’s serves. It’s just another incident that Kyrgios has had to deal with recently.

Before this incident, Kyrgios had previously been fined a total of $16,500 for not giving full effort at events, unsportsmanlike conduct, and verbal abuse of a spectator. The new fine and suspension runs through January 15th, a day before the beginning of the 2017 Australian Open.

While returning before the Australian Open is somewhat ideal for Kyrgios, who is from Australia, he does have the option to possibly return in three weeks. That’s assuming he agrees to place himself in “a plan of care under the direction of a sports psychologist or an equivalent plan approved by the ATP.” If he does he would be eligible to return Nov. 7.

Earlier Monday, Kyrgios apologized for his conducted, accepted the punishment, and said he would try and be better in the future in a lengthy statement released on his website.

“Following the ATP’s decision today I would like to take this opportunity to apologise again for the circumstances in Shanghai. The season has been a long one as I battled several injuries and other challenges towards the end of the summer. The Asian circuit was particularly tough after the long week and win in Tokyo and with the travel throughout the continent, my body finally just gave out in Shanghai both physically and mentally. This is no excuse, and I know very well that I need to apologise to the fans – in Shanghai and in other parts of the world – as well as the tournament organisers in Shanghai who do an amazing job. I of course know how important the fans are to the success of our sport and I personally love the interaction with fans in the many different cities throughout the world on the tennis circuit.  I am someone who gives a huge amount of time to my fans because I love and value their support. Their energy is what motivates me to reach for the top of the game. I regret that my year is ending this way and that I will not have a chance to continue chasing the ATP Finals.  This was an important goal for me. I do understand and respect the decision by the ATP and I will use this time off to improve on and off the court. I am truly sorry and look forward to returning in 2017.”

Earlier this year, Kyrgios also ran into trouble at Wimbledon, the US Open, and nearly landed into trouble at the Olympics for his performance in the first two and refusing to play in the third.