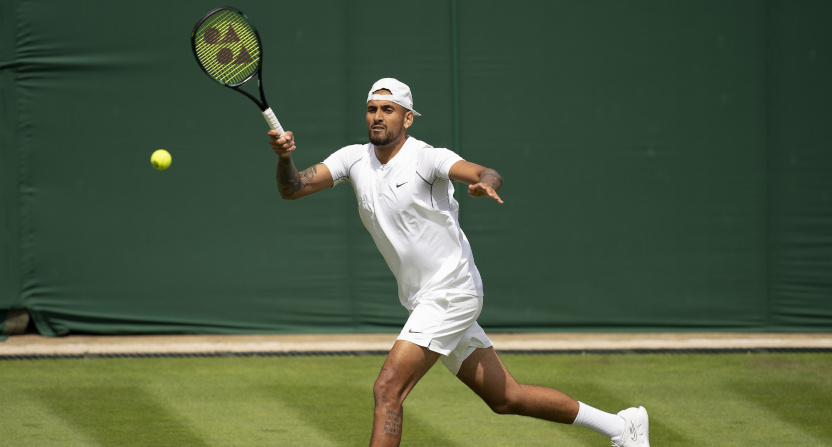 We’ve seen some athletes with notable reactions to critical fans recently, from Kyrie Irving extending Boston Celtics fans multiple birds and making explicit comments to them to Klay Thompson criticizing Celtics’ fans explicit chants at Draymond Green. The latest case of this comes from Australian tennis player Nick Kyrgios at Wimbledon. After a first-round match where he beat Britain’s Paul Judd 3-6, 6-1, 7-5, 6-7 (3), 7-5, the 27-year-old Kyrgios spit in the direction of a fan who was heckling him:

Kyrgios spits in the direction of the fans who were giving him some gip #wimbledon22 pic.twitter.com/bEDwjzXwcB

Kyrgios addressed that afterwards, and said his spitting was justified because of what the fan had said. Here’s what he said on that, via ESPN’s Simon Cambers:

“Today, as soon as I won the match, I turned to him … I’ve been dealing with hate and negativity for a long time, so I don’t feel like I owed that person anything,” said Kyrgios, who said he had asked for the fan to be removed.

“He literally came to the match to literally just, like, not even support anyone really. It was more just to stir up and disrespect. That’s fine. But if I give it back to you, then that’s just how it is.”

And he blamed social media for the fan’s criticisms:

“I love this tournament; it’s got nothing to do with Wimbledon,” Kyrgios said of the incident. “I just think it’s a whole generation of people on social media feeling like they have a right to comment on every single thing with negativity. It just carries on to real life.

“Because there’s a fence there — and I physically can’t do anything or say anything because I’ll get in trouble — they just feel the need that they’re just able to say anything they want.”

…”I’ve never, ever just gone to anyone else’s job and just blatantly spat, disrespected them,” Kyrgios said. “I don’t understand why people do that to athletes. Why do they feel the need that that’s acceptable?

This wasn’t the only controversy that Kyrgios got into during this match, either. He was warned at one point for hitting a ball out of the stadium. He also was picked up saying “I don’t start clapping when they’re scanning s–t at a supermarket, do I?” And he had a running back-and-forth with umpire Marija Cicac, and took particular exception to a lineswoman talking to her, calling that lineswoman a “snitch.”

“I didn’t do anything and she went to the umpire and told her something that I didn’t say,” Kyrgios said. “She found it relevant to go to run to the umpire at 30-love and make it about her. No one was there to see her today, factually.”

This is far from the first time that Kyrgios’ behavior at a tennis tournament has caused some controversy. This year alone, he saw fines for behavior at Indian Wells and Miami, and then exited a Houston tournament while launching explicit rants at officials. And way back in 2019, Barnaby Lane put together a Business Insider list of “The 11 Most Ridiculous Things Nick Kygrios Has Ever Said Or Done,” which has a lot of significant entries, but might also have some since-then behavior included if it was compiled now. Still, his spitting at a fan here and claiming that’s an appropriate response to heckling feels like a further step even by his standards. We’ll see if anything comes of this.