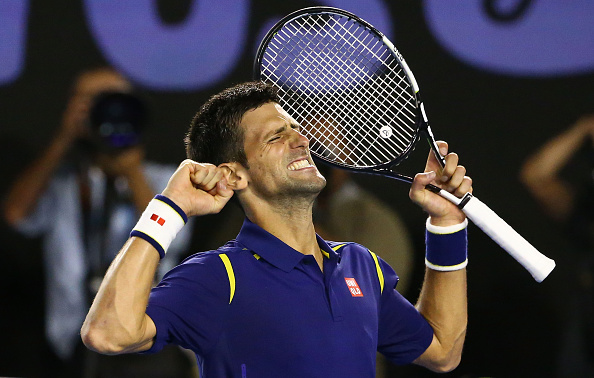 Down 5-3 in the third set, Novak Djokovic looked up at his box and sighed. He had made quick work of Roger Federer in the first two sets of the Australian Open semifinal, winning 6-1, 6-2 in a match that didn’t even seem as close as the scoreline at the time.

And then Federer woke up, or realized where he was after the dizzying first hour, to put Djokovic on his heels, make him realize he’s mortal, and know that Federer wasn’t going away that easy.

After all these years, has anyone proven Djokovic is NOT a tennis playing robot?

Federer won the third set 6-3, much to the Aussie crowd’s delight, in part because watching two legends battle like they did in set three is what tennis fans around the world had hoped for in this match, and in part, because those in attendance paid for a back-and-forth thriller and through two sets, had nothing but a one-sided beat down.

This is absolutely clinical what Djoker Is doing right now to Fedfan ,this maybe the best I have ever seen someone hit the ball

It wasn’t even that Federer did anything particularly wrong in the first two sets, it was more that Djokovic was playing at a level no one in the history of the game has seen. He got to every ball Federer sent his way. His first serve attack baffled Federer, putting the Swiss legend on his heels and making him question what in the world he could do compete in the match, let alone win.

There was a sense of greatness coming from just one side of the court, making fans forget how otherworldly Federer was, and is, as a player. This wasn’t some first-round walkabout. This was Roger Federer, playing as good as anyone in the world right now, and Djokovic made him look like one of the ball boys picked up a racquet and started swinging.

“I definitely played unbelievable the first two sets,” Djokovic told Jim Courier during his on-court interview after the match. “But that’s what’s necessary against Roger.”

The biggest surprise of the second set was that Federer won two games. Djokovic was that dominant.

This IS NOT Federer showing he's nowhere near good enough anymore. It's Djokovic showing how unbelievably good he is. #AusOpen

And, yet, something woke Federer up in the third set, like he realized going down the way he was to Djokovic wasn’t going to merely count as a loss in the Aussie semis, but in history. Getting beat the way he was through two sets is what changes legacies. Sure, Federer isn’t in his prime anymore, but the way Djokovic was taking this version of Federer down made people question if any version of Federer would have been able to compete.

Nole’s on some ’86 Bears stuff right now. This isn’t even competitive.

This wasn’t Ali-Frazier, it was Ali against a punching bag wearing a bandana, holding a racquet.

Maybe that’s what woke Federer up. Or maybe it was just that a player of his caliber can’t be held down as long as Djokovic was doing it. It’s impossible, even at this age, to stop Federer for that long. He fought his way back into the match, down two sets to one, no longer worrying about having won just three games in the previous two sets.

And then the roof closed.

A 10-minute delay between the third and fourth sets left both players sitting, stewing and stretching until they could resume play.

The fourth set was sloppy by their standards, trading unforced errors along with service games to reach 3-3, before one of the great Federer-Djokovic games of their 45-match history.

Sadly for Federer, and for those wishing for a fifth set between the two, that unbelievable point was left for naught, as the game ended with Djokovic breaking Federer for a fifth and final time in the match.

There was one more game to play, but the contest ostensibly ended when Federer dropped his final service game, losing after the next, 6-1, 6-2, 3-6, 6-3, in a match that started as lopsided as any of the previous 44 contests ever had, ending with a classic rally between two champions and reinforcing the point that Djokovic is as great right now as any player the sport has ever seen.

“Both Roger and Rafa have contributed to my career, to my success, because of these two rivalries that I’ve had, playing those two guys 100 times combined obviously made me a better player,” Djokovic told Courier. “I’ve worked very hard to get myself in a position to challenge them. It wasn’t easy, but right now I feel like I’m at the peak of my career and I’m trying to cherish every moment on the court.”

If Djokovic is at his peak, very few have ever reached one as high. He is 33-1 in his last 34 Grand Slam matches, dating back to the Australian Open last year. He has now reached his sixth Aussie Open final, winning each of the previous five. He has reached the semifinals in 22 of the last 23 Grand Slam events, getting to the finals in 17, with a chance to win his tenth.

Djokovic now ahead in all his head-to-head records with the "big four":

It’s starting to look more like the big one.