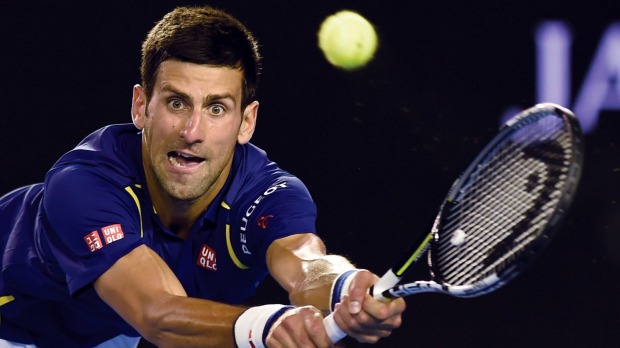 There was a moment Sunday night in Melbourne Park’s Rod Laver Arena when the men’s singles final of the 2016 Australian Open remained in doubt.

A tense second set worked its way toward a conclusion, and although Novak Djokovic broke Andy Murray’s serve for a 6-5 lead, he still had to serve out the set in the 12th game. Djokovic, who once had problems winning major finals on a consistent basis (remember those times?), recalled his 2012-2014 demons by double faulting on consecutive points. Murray gained a break chance at 30-40, moving one point from forcing the ultimate crucible in major-tournament men’s tennis, the second-set tiebreaker.

Then, chair umpire Carlos Ramos failed to make an out call on a Djokovic first serve:

Murray did not challenge the call.

Djokovic found the safe harbor of a deuce scoreline. He served out the set, 7-5, and in light of the fact that Murray had played a semifinal of just over four hours against Milos Raonic — with 24 fewer hours of turnaround time before this final — the idea of the No. 2 seed mounting a comeback was hard to take seriously.

Murray — playing this tournament with his wife about to have a baby, and with his father-in-law recovering after a health scare a week earlier — did not give up the fight. He loosened up on his groundstrokes and overcame a break deficit to force a third-set tiebreaker. However, all that climbing and exertion created a mentally fatigued player. Two double faults by Murray gave Djokovic a 4-1 lead. The No. 1 seed easily won the breaker, 7-3, to finish off a 6-1, 7-5, 7-6 (3) victory for his sixth Australian championship and his 11th major title. The achievement enables Djokovic, 28, to join Rod Laver and Bjorn Borg — two of the foremost figures in Open Era men’s tennis — on the all-time major titles list.

All in all, this final — in contrast to Angelique Kerber’s upset of Serena Williams on the women’s side — unfolded as everyone expected it would. Murray did well to emerge from the chaos in the bottom half of the draw, but based on form, fatigue and family, Murray did not seem to be in a position to play his very best tennis against Djokovic. That’s what was needed to prevent the World No. 1 from claiming this sixth Australian Open. Murray simply couldn’t summon his best when a set was waiting to be won. The rest, as they say, is history.

Murray’s opponent was simply too good:

that is just absurd https://t.co/jcjOIsJD2N

With this title safely tucked away, Djokovic does indeed become an even larger figure in the evolving story of tennis. That he defeated Murray (who is now 0-5 in Australian Open finals) is no earth-shaking news event in itself. Moreover, after the one nicknamed “Nole” (pronounced “No-lay”) survived 100 unforced errors in the fourth round against Gilles Simon, it stood to reason that a generationally dominant player would straighten out his game and cruise to the title.

What’s worth discussing after this championship match is not the match itself, but the theater of drama Djokovic has created for the rest of 2016 and beyond.

Just exactly where will Djokovic be in three or four years? Now that he’s reminded us that his imposing 2015 is not about to recede into the shadows of memory, Djokovic stands poised to make history on a lofty scale.

The only convincing retort one can make in the attempt to counter the idea of a Pax Djokovic is this: We’ve been here before.

Six years ago, in another Australian summer, Roger Federer had just won the 2010 Australian Open. Just as Djokovic did this weekend in Melbourne, Federer beat Murray in straight sets, closing out the championship match by capturing a third-set tiebreaker.

At the time of his win, Federer had won a third major title in his last five major-tournament appearances. He had made five straight finals (part of a run of eight straight finals dating back to the 2008 French Open). Not yet 29, Federer appeared ready to win three, four, maybe five more majors before his career was through.

Then, however, Rafael Nadal uncorked his glittering, glowing 2010 masterpiece of a season, winning the next three majors and completing the career Grand Slam at the U.S. Open.

In 2011, Djokovic took the baton from Nadal, producing a season for the ages with three majors of his own. Federer did not play poorly at the major tournaments in 2011 — he lost to Nadal in a closely-contested French Open final. He reached the semis of the Australian, and he had two match points against Djokovic in the U.S. Open semis. However, his contemporaries were slightly better. Federer has continued to put himself in position to win major titles, but the steady stream of trophies has run dry.

When Federer’s major-tournament outlook became cloudy and gray, Nadal stepped into the spotlight and offered pundits good reason to think he would catch the Swiss. Nadal, at the 2014 French Open, defeated Djokovic in the final. The result made Djokovic 6-7 in major finals. The idea that Djokovic would gain a second wind after multiple frustrating seasons seemed to exist within the realm of possibility, but it wasn’t considered a likely occurrence after yet another loss to Nadal in Paris. After that 2014 French Open crown, Nadal — like Federer at the 2010 Australian Open — had won three of the previous five majors. Rafa had reached four finals in a span of five major tournaments. His career was chugging along — no longer at Wimbledon, but certainly everywhere else.

You know where things stand today, though: Nadal — through a combination of self-doubt, the injuries which fed those doubts, and a lack of heft on his groundstrokes — appears to have stalled. The upcoming clay-court season will represent a fascinating and hugely significant period in the Spaniard’s career. If he can’t win the French in 2016 or at least put a big(ger) scare into Djokovic, it will be hard to think he can win another major title.

Now, we turn to Djokovic.

He doesn’t have the 16 majors Federer owned back in January of 2010, or the 14 Rafa possessed in early June of 2014. Yet, the other parallels are striking. This Australian Open title has given Djokovic a fourth title in his last five majors. He has reached five straight major finals. Not quite 29, Djokovic is turning on the jets in his late 20s, making an all-out pursuit of history. As with Federer and Nadal in previous years, it seems hard to see where the ATP Tour will produce the plot twists which can quickly derail this ascendancy.

Yet, Federer and Nadal didn’t sustain what they had established in 2010 and 2014, respectively. Many will say that Djokovic is going to be subjected to the same forces.

Federer, though the second-best player in the world (not by ranking — Murray is officially No. 2 — but according to overall form), is still 34. Beating Djokovic in a best-of-five-set match — as seen in Thursday’s semifinal — will be an extremely difficult task for Federer over the remainder of his career.

Nadal is on the decline, and while he might make one last stand at Roland Garros this spring, he isn’t a top-tier threat at Wimbledon or either one of the hardcourt majors… at least not now.

Murray, bless his heart, continues to produce steady and solid (just not championship-bearing) results, but Djokovic once again reminded the Scotsman and a global TV audience how fully he owns the head-to-head between the two men at the moment.

Stan Wawrinka — Djokovic’s toughest matchup — lost in the fourth round of the Australian Open (to Milos Raonic) and remains the most volatile of the top five players in the ATP rankings.

You can see the point being constructed here: Whereas Federer had Nadal and Djokovic to stop him, and whereas Nadal ran into the brick wall Djokovic has become over the past two years, there’s no readily apparent threat to Djokovic.

If he is healthy and in form over the next four years, Djokovic could pile up more majors in his early 30s. Federer won only one major after turning 30, and Nadal is unlikely to win a major after he turns 30 this June. Only at the French might he be able to remain a consistent title threat. Djokovic, though, could create the Serena-like autumn empire which would enable him to soar up the charts.

Yes, things change quickly in tennis… but Novak Djokovic is making it harder and harder to contest the notion that he’s in prime position to become the most credentialed and accomplished major-tournament player in the history of men’s tennis.

This is what will make the 2016 tennis season such a thoroughly gripping and compelling drama. The Australian Open has set the table for Djokovic and tennis fans in the months to come.