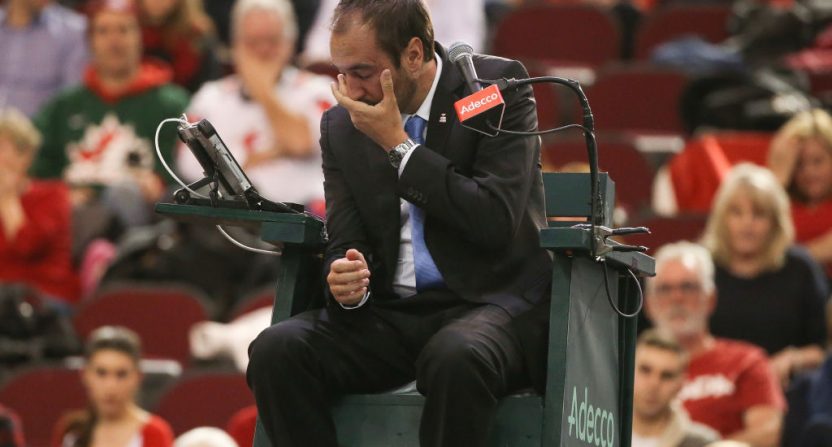 Sunday was a big day in the world of sports, with a football game a couple people watched known as “Super Bowl LI.” However, before the game even kicked off, an odd and funny situation happened in a completely different sport, with an unusual country elimination during the Davis Cup.

What’s the Davis Cup? Well, it’s a major international tennis tournament where players compete for the country they are from.

The thing is, they weren’t eliminated for their poor play. Instead, they were eliminated from their first round tie after Denis Shapovalov was “defaulted” after he hit the match’s chair umpire, Arnaud Gabas, in the face.

That has to hurt.

The Canada-Britain series was tied 2-2, and was taking place in Canada no less! The Canadians were on the brink of the quarter-finals only to find themselves packing away their rackets and having to head home. Meanwhile, the umpire involved was taken to hospital for evaluation.

Naturally Shapovalov felt horrible about about sending his team home.

“I went back and spoke to the umpire afterwards and apologised directly to him.”

“Luckily he was OK but obviously it’s unacceptable behaviour from me. I feel incredibly ashamed and embarrassed and I just feel awful for letting my team down, for letting my country down, for acting in a way that I would never want to act.

“I can promise that’s the last time I will do anything like that. I’m going to learn from this and try to move past it.”

Team Canada captain Martin Laurendeau understood the decision, and said it was the only acceptable result based on what transpired.

“I didn’t see what happened. When the last point was over I got up to see if on the changeover he’d have all his drinks and bananas and I just heard the crowd go quiet and then I looked back to see what had happened to the umpire and that’s when I realised he was in the middle of it all,” Laurendeau said. “I knew immediately the rules are the rules and you’ve got to play by the rules.”

Luckily for Shapovalov he’s only 17, so he has plenty of time to make up for this mistake over his career. His teammates also expressed this support.

No one is nicer or carries themselves better for a 17 y/o than Shapovalov. Everyone can see that today was an accident. Can happen to anyone

Hopefully this will be something Shapovalov can rebound from. It’s certainly going to give him one heck of a story. And hey, at least he didn’t have to go on a date with anyone, unlike one of his Canadian tennis peers…