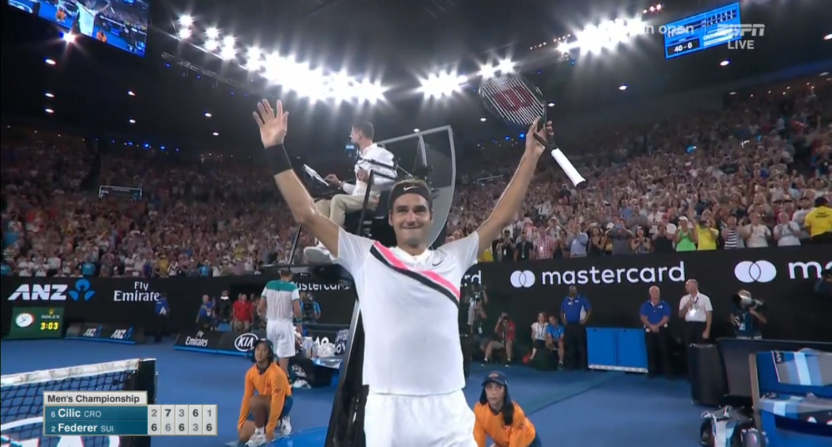 In a match that was over almost as soon as it began, Roger Federer romped to a 20th Grand Slam title via defeat of Marin Cilic.

Federer took the first set in almost no time:

Cilic battled into a tiebreak in the second set, showing new life in both his legs and with his forehand; his aggression was rewarded with a fairly easy tiebreak victory:

Unfortunately for Cilic, Federer yanked back the momentum early in the third set with a tidy break of serve:

Which set up a fairly clean set for Federer, who finished it off with a love game, 6-3:

During the set break, Cilic spent most of his time calmly gathering his thoughts, steeling himself for what would need to be a mentally strong two sets of tennis to come back. Nah, just kidding, he bitched about how long it took for his rackets to be restrung:

Things looked bleak there, obviously, but they got even bleaker in the opening game of the fourth set, when Federer did this to close out Cilic’s service game:

Cilic, though, didn’t go quietly, destroying Federer’s serve in the sixth game of the set:

And then he broke him again:

And then he served for the fourth set, a service game Cilic handled easily:

The fifth set started a bit chippy, with Federer voicing his displeasure with a blown call from a linesman that cost him a return winner:

Federer overcame that, though:

Roger would break Cilic’s serve again in the fifth, but that game broke Cilic’s spirit.

Federer served out the match thusly:

And after a review, it was confirmed:

It was an odd Grand Slam win for Federer, who was dominant throughout; his two dropped sets in the final represented the only two set losses for the whole tournament. But thanks to various injuries and upsets, Federer also didn’t exactly have to go through a murderer’s row, either; he faced only three seeded players, #6 Cilic, #19 Tomas Berdych, and #29 Richard Gasquet.

Still, a win is a win, you don’t pick your opponents, etc. And Roger is so clearly playing some of his best tennis, despite being 36. That it feels like he should be older given his longevity and younger given his on-court play might be Federer’s enduring legacy.