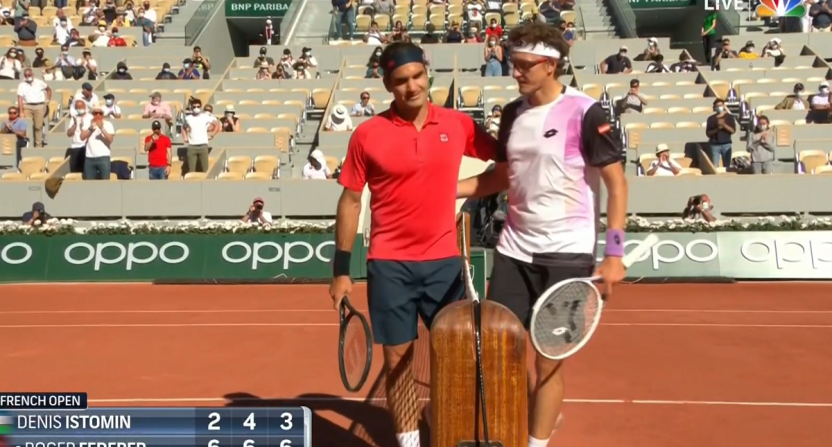 Roger Federer is 39 years old. He’s also now into the second round of the French Open at Roland-Garros, beating Denis Istomin in straight sets.

That’s not surprising, of course; Federer is the #8 seed in the men’s draw, and despite his age remains at an absurdly high level when he’s healthy. It’s almost impossible to frame his accomplishments in a new way; the man has won 20 Grand Slam singles titles, after all.

But let’s try: with his first round win, Federer has now won at least one Grand Slam match for 22 straight years, going back to 2000.

You just love to see it 😍#RolandGarros | @rogerfederer pic.twitter.com/4SXeIdPxqP

Federer skipped the 2021 Australian Open due to an injury, so today’s win also means he’s now played in a Grand Slam for 23 consecutive years, going back to 1999. It’s honestly just an absurd example of longevity in a sport that, until Federer himself, was not known for being kind to players in their early 30s, much less late 30s.

I am watching Roger Federer play tennis in 2021. This is a very great thing.

i’ll never get tired of seeing this pic.twitter.com/40xN0UGzSB

The biggest threat to the streak may have actually come last year, when the pandemic meant there was only one Slam held in 2020. (Federer made a run to the Australian Open semis before the entire world shut down.) But other than 2020, he’s actually won at least two Slam matches during every year of his streak.

That we can still watch Federer (and Serena Williams, who has won at least one Slam match for 24 straight years) in 2021 is truly a gift.