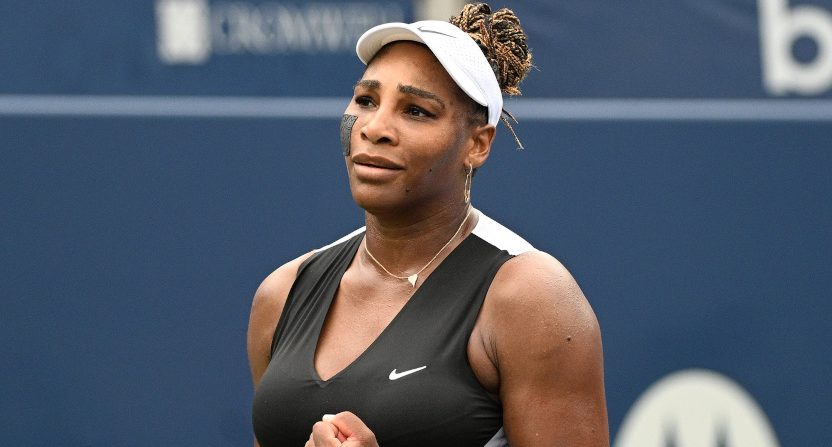 This year’s US Open will be the last Grand Slam event to feature Serena Williams. Williams announced Tuesday that she’s retiring from tennis following that tournament (which begins August 29) to focus on growing her family and working to grow her venture capital firm.

Williams, 40, has won 23 major titles in singles, 14 in doubles (all with sister Venus), and two in mixed doubles. Her most recent singles victory in a major came in the 2017 Australian Open, which came while she was two months pregnant with daughter Olympia. She made the final in both Wimbledon and the US Open in both 2018 and 2019, but she’s battled numerous injuries since then, including a leg injury sustained in the first round of Wimbledon last year that kept her out of last year’s US Open and this year’s Australian Open. She announced that this year’s US Open will be her last tournament in a first-person piece (as told to Rob Haskell) at Vogue that was published Tuesday, saying retiring is tough for her, but it’s the right decision to let her focus on her family and her investment fund work. Here’s more from that piece:

Believe me, I never wanted to have to choose between tennis and a family. I don’t think it’s fair. If I were a guy, I wouldn’t be writing this because I’d be out there playing and winning while my wife was doing the physical labor of expanding our family. Maybe I’d be more of a Tom Brady if I had that opportunity. Don’t get me wrong: I love being a woman, and I loved every second of being pregnant with Olympia. I was one of those annoying women who adored being pregnant and was working until the day I had to report to the hospital—although things got super complicated on the other side. And I almost did do the impossible: A lot of people don’t realize that I was two months pregnant when I won the Australian Open in 2017. But I’m turning 41 this month [in September, when this print issue will come out], and something’s got to give.

I have never liked the word retirement. It doesn’t feel like a modern word to me. I’ve been thinking of this as a transition, but I want to be sensitive about how I use that word, which means something very specific and important to a community of people. Maybe the best word to describe what I’m up to is evolution. I’m here to tell you that I’m evolving away from tennis, toward other things that are important to me. A few years ago I quietly started Serena Ventures, a venture capital firm. Soon after that, I started a family. I want to grow that family.

But I’ve been reluctant to admit to myself or anyone else that I have to move on from playing tennis. Alexis, my husband, and I have hardly talked about it; it’s like a taboo topic. I can’t even have this conversation with my mom and dad. It’s like it’s not real until you say it out loud. It comes up, I get an uncomfortable lump in my throat, and I start to cry. The only person I’ve really gone there with is my therapist!

…There is no happiness in this topic for me. I know it’s not the usual thing to say, but I feel a great deal of pain. It’s the hardest thing that I could ever imagine. I hate it. I hate that I have to be at this crossroads. I keep saying to myself, I wish it could be easy for me, but it’s not. I’m torn: I don’t want it to be over, but at the same time I’m ready for what’s next.

Williams’ 23 Grand Slam singles titles are first in the Open Era (since 1968, which let professionals compete in Grand Slam events as well as amateurs) and second all-time, behind only Margaret Court’s 24 (recorded from 1960-73). On the men’s side, Rafael Nadal holds the record with 22, while Novak Djokovic and Roger Federer have 21 and 20 respectively, but all are still active. Williams (seen above at the National Bank Open in Toronto Tuesday, where she beat Nuria Parrizas Diaz in first-round play) also has a career record of 855–153 in singles (84.8 percent) and 192–34 in doubles (85.0 percent). She’s been one of sports’ most dominant athletes, and the tennis world will be very different without her playing.