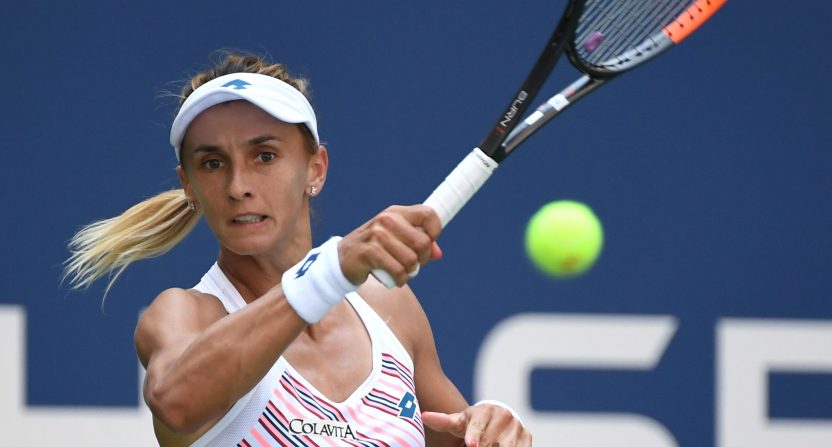 Ukrainian pro tennis player Lesia Tsurenko lost in straight sets to top seed Iga Świątek in the first round of the French Open. In her post match news conference Tsurenko admitted it wasn’t easy to be playing tennis while her country is currently defending itself against Russia but she went into further detail on the lack of support from her fellow competitors.

Tsurenko revealed that while there was a lack of players speaking out publicly on the Russian invasion of Ukraine, very few have privately come to her to even discuss what is going on in Ukraine.

“For me, personally, it’s tough to be here,” Tsurenko said, “just because I don’t get much words said about the support of my country. And it’s just tough to be with people who look like they don’t understand. It’s just tough. … I’m Ukrainian, and there’s a war in my country, and it’s tough. I think five players spoke to me. Maybe four or five. Maybe a few more coaches. … But what can I do?”

As of now, players from Russia and Belarus are banned from team tournaments like the Billie Jean King Cup and Davis Cup but they are able to play in individual tournaments except for Wimbledon. In response to the All England Club’s announcement to ban Russian and Belarusian players, the WTA and the ATP will not award ranking points at Wimbledon.

One reason for the apparent lack of support could be that there are far more Russian and Belarusian players than Ukrainian players. At the French Open, 18 players are from Russia or Belarus while four come from Ukraine. And all four are on the women’s side of the bracket.

It’s one thing to avoid publicly discussing the war but not bothering to take time out privately to understand what’s going on shows that a lot of pro tennis players might simply don’t care. That’s something that Tsurenko hopes will change as time goes on.

“I don’t know if I can ask players to care more, but I would like to see that from the players, from the WTA, from ATP,” Tsurenko said. “I would like top players just to support more and to show more understanding of what is really going on.”

“I want people to understand that war is terrible and there is nothing worse in this world than a war. I think when it’s not in your country, you don’t really understand how terrible it is.”

Many top players have been non-committal about the decision to ban Russian and Belarusian players at Wimbledon. Naomi Osaka said she was leaning toward not playing at Wimbledon if ranking points aren’t going to be awarded while Rafael Nadal “both-sided” the situation and didn’t actually give an opinion.

Tsurenko’s opponent, top ranked Iga Świątek, has been wearing a ribbon in the colors of Ukraine’s flag for the past few weeks and the 20-year-old Polish star kind of spoke out but not really.

“Well, honestly, I was trying to avoid saying straightforward what I think, because … every solution is going to be wrong for some people. … The sport has been used in politics, and we are kind of public personas, and we have some impact on people. It would be nice if the people who are making decisions were making decisions that are going to stop Russia’s aggression,” Swiatek said.

“I feel like I have that responsibility, but on the other hand, I don’t have much life experience and I’m aware of that,” she added. “And, yeah, when I’m going to be ready to say more, I will.”