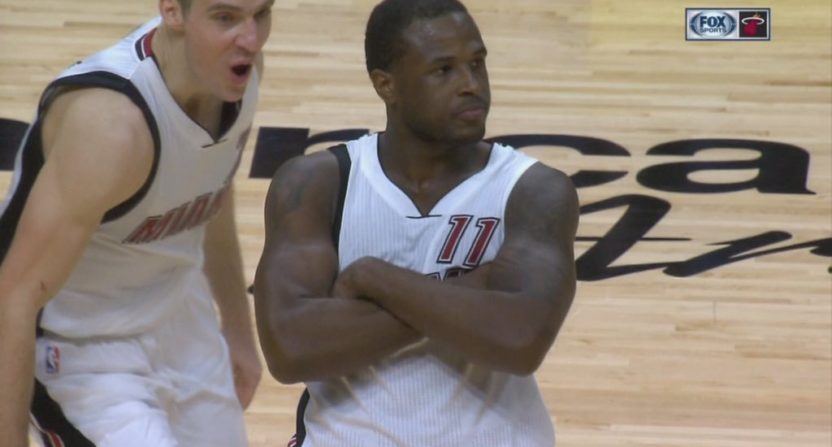 NBA free agency rolled along Wednesday, and while no big names made news, a few fun role players—including a pair of trigger-happy gunslingers—earned new contracts.

We’ll recap the day in NBA free agency, plus fill you in on baseball and all else from the sports world, right here in The Cheat Sheet.

There’s something oddly alluring about a conscience-free chucker. Even if we know an offense-first player who shoots 41 percent from the floor isn’t, you know, good, it’s still fun to watch him jack up fadeaways until he gets hot and runs off 14 points in a quarter.

– Despite our pleadings that he sign with the Knicks, career 41.3 percent shooter Dion Waiters returned to Miami on a reported four-year, $52 million deal. That means the Heat will be getting more of this:

– Another famously trigger-happy shooting guard found a new team Wednesday. Nick Young, fresh off a surprisingly not-terrible season for the Lakers, earned a one-year, $5.2 million deal from the defending champion Warriors. It didn’t take long after Young’s signing for the world to discover some regrettable tweets he sent not so long ago.

I hate 2016 GS fans … They dnt know nothing about basketball

All this passing getting me mad

– Andre Roberson is a very different type of player from Waiters and Young, but he got a deal that fell between theirs, re-upping with the Thunder for three years and $30 million. His job is to play defense so Russell Westbrook doesn’t have to.

– Richard Jefferson will put off retirement for one more year to return to the Cavs. RJ is 37 years old, but he looks 27 and can still jam it once in a while.

– The Celtics are still putting a bow on their signing of Gordon Heyward, shopping key players including Jae Crowder, Avery Bradley and Marcus Smart to clear cap space for their new star’s four-year, $128 million max contract. They might wind up engaging the Jazz, Heyward’s former team, in a sign-and-trade.

– The highlight of the night in Major League Baseball was Colorado Rockies pitcher Jon Gray helping his own cause in a big way. Gray launched a 467-foot home run, the farther by a pitcher since 2015.

– Good news for all baseball fans: Mike Trout began a rehab stint and could be nearing a return.

Mike Trout says he felt great. Was thinking about his thumb in his first at bat. Not so much after that.

– MLB announced the bracket for next week’s Home Run Derby. It’s going to be a fun one.

The @TMobile #HRDerby bracket is out.

Get ready for some POWER. pic.twitter.com/RQJ64bX70w

– Some less cheery news from the site of the All-Star Game: Miami-Dade county tax-payers could wind up getting billed for twice as much for Marlins Park as they were supposed to, as team owner Jeffrey Loria swims in cash.

– The University of Texas reached a sponsorship deal with Corona, setting an interesting precedent for college sports.

– Cowboys LB Damien Wilson was arrested for aggravated assault with a deadly weapon. And to think NFL players had been having a relatively well-behaved offseason.

– Barcelona has extended Lionel Messi through 2021.

– A sequel to Rocky-spinoff Creed could involve Ivan Drago. Consider us intrigued.

If you like seeing reporters getting showered with vomit… well, enjoy.