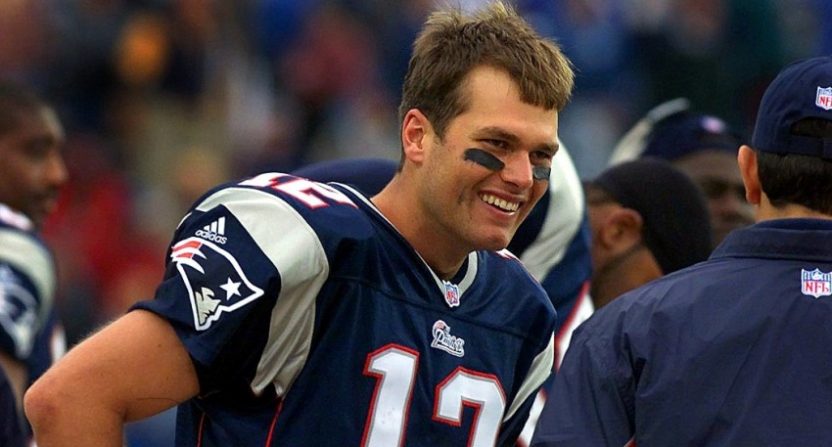 There was a lot of post-Super Bowl material all over the Internet on Monday as more and more stories about the game itself emerged. One of the more viral stories focused on a great Tom Brady ad. Meanwhile, we reviewed the best SB51 commercials, looked back at the past year’s worth of championships, reported on an Atlanta store that got eager, and outside of the Super Bowl, Baylor finds itself in the midst of another scandal. 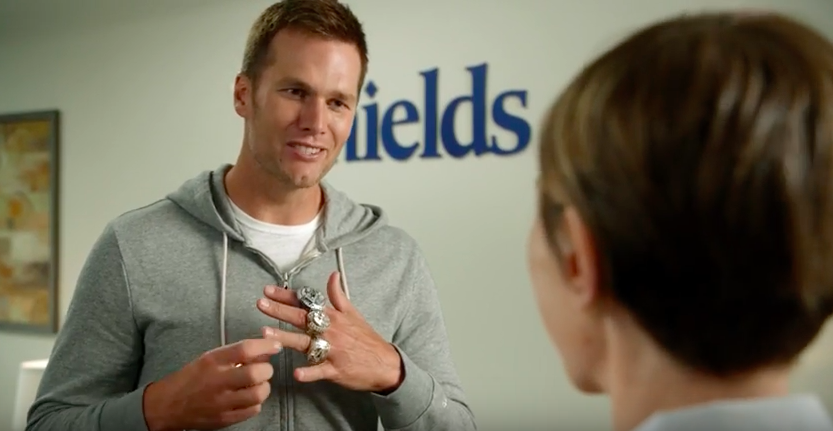 After Tom Brady led the New England Patriots to a Super Bowl 51 victory, perhaps the greatest commercial of the Super Bowl was released. That’s right, it was shown to the public AFTER the game.

Why’s that? Well, just watch for yourself.

As it turns out, this isn’t exactly a new commercial but an alternate ending to the original. The commercial originally aired last October, with a different ending having Tom Brady respond “For now” when asked if that is all he had to set aside. While we are unsure of just when the commercial was shot, the timing of it all would seem to suggest Brady was aware of his four-game suspension to start the season, and the new ending would only help to strengthen that belief with the apparent shot at the commissioner.

Here is the original commercial for comparison, with only the ending being different.

Yeah, the updated one is way better.

What were the best and worst Super Bowl 51 commercials? 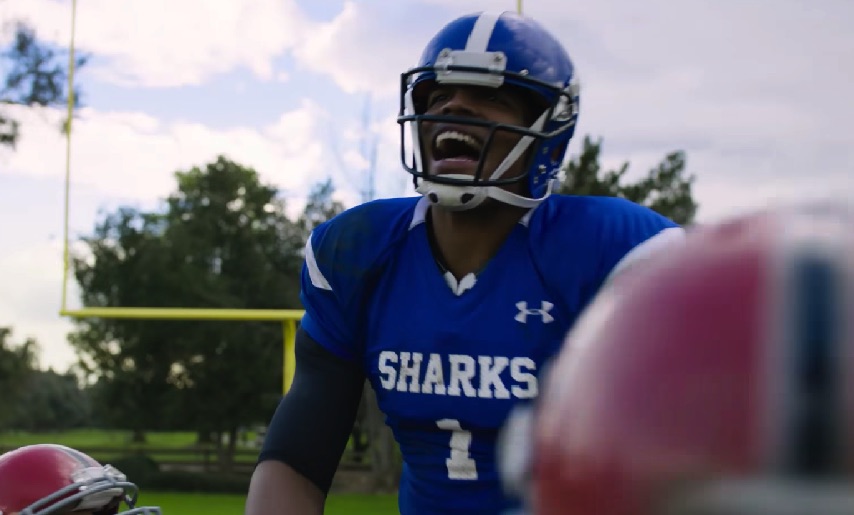 Our own Ian Casselberry took a look at the 10 best and 5 worst Super Bowl 51 commercials, as did most of the Internet.

Self plug here, but here’s Ian’s description of my favorite:

Netflix: Stranger Things 2
This ad for Stranger Things 2 may have been the game-changer of the night. The Super Bowl was looking like a snoozer in the third quarter, then we got what looked like it might be an appeal to nostalgia or a throwback ad for Eggo, only for the screen to go fuzzy and hear someone scream “Eleven!” As she opens her eyes suddenly, we’re pulled in with a montage of cuts from season 2 of Netflix’s summer sensation Stranger Things, which will premiere on Halloween. It snapped everyone out of their Super Bowl daze and perhaps not coincidentally, the game became more interesting after this ad played.

Now go read the rest of his thoughts!

Was the past 12-month stretch of titles the best in sports history?

Our Matt Yoder seems to think so and I’d agree.

Amazingly though, Super Bowl LI was just par for the course when it comes to great and historic championship events over the next 12 months. While this is a totally subjective judgment call that’s totally susceptible to being a prisoner of the moment, this is the most incredible stretch of championship events ever. We’ve seen buzzer beaters, overtime games, the most famous droughts in sports end, historic collapses, photo finishes and everything in between. At least in the three decades I’ve been on planet earth, I can never remember anything like this.

With the Atlanta Falcons up 21-3 at the half and 28-3 in the third quarter of Sunday’s Super Bowl LI, it seemed like a safe bet they’d be Super Bowl champions. No team had even come back from more than 10 points in the Super Bowl before. Also, nothing was working for the New England Patriots at that point. That led to an Atlanta store putting Falcons’ “Super Bowl Champions” merchandise out on the shelves. However, they then had to remove it once the Patriots mounted their comeback. Here’s a GIF of this at an Atlanta Dick’s Sporting Goods, via Fox 5 Atlanta sports anchor/reporter Cody Chaffins:

When I thought the #Falcons loss couldn't get any more depressing, I ran across this video from ATL. They already had the merchandise out! pic.twitter.com/T9Wxd5XHDx

That GIF comes from the full report on this from Fox 5’s Doug Evans. Here’s that clip, of Evans reporting from a Dick’s Sporting Goods in northern Atlanta’s Buckhead neighborhood:

The hurt is real…. pic.twitter.com/fuvypBdMey

As if the copious sexual assault allegations against Baylor’s football players weren’t enough of a sex scandal for the Bears’ program, there’s now more.

On Monday, the Waco Trib reported that Baylor strength coach Brandon Washington was arrested early Saturday morning in a prostitution sting. He has been released on bail and fired from his job at Baylor.

A statement from the Baylor athletics department sent late Monday reads, in full: “After a full criminal background check was completed and cleared, Brandon Washington was recently hired as an assistant in the Football Strength and Conditioning area. Baylor was notified on February 4 of Brandon Washington’s arrest and terminated his employment immediately that day.”

“When we arrived at Baylor we made a commitment to character and integrity in our program,” head football coach Matt Rhule said. “Brandon’s actions are completely unacceptable. We will not tolerate conduct that is contradictory to these values.” 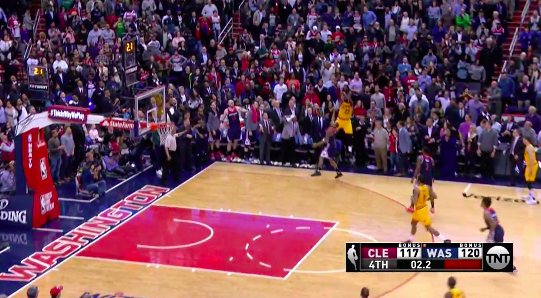 – Yes, LeBron James made the shot in the image above. Don’t believe me? Just watch.

ARE YOU KIDDING ME?#LeBronJames ties it up w/ the THREE off the glass! pic.twitter.com/8fuNrHqprL

– Speaking of LeBron, apparently these rumors of Kevin Love for Carmelo Anthony are getting to him.

And Kevin Love for that matter.

– Our own Jim Weber made great points on if it’s time to retire the question of “Did Team A win the game or did Team B lose it?”

– California law AB 1887 is being discussed as it pertains to UC and CSU schools (think Cal, UCLA, Cal State Fullerton, etc.) because it could stop them from playing NCAA games in four states with anti-LGBT laws.

The new California law, which went into effect Jan. 1, prohibits state-funded or state-sponsored travel to states with laws deemed discriminatory against the LGBT community.

California Attorney General Xavier Becerra reportedly determined it applies to Kansas as well as Mississippi, North Carolina and Tennessee — which stops Cal or other state schools from scheduling road games in those states in the future.

– Speaking of North Carolina, the NCAA could potentially stop placing any major NCAA events in the state for FIVE MORE YEARS unless the famous and discriminatory HB2 law is repealed.

North Carolina Sports Association letter to NCGA: NCAA will remove all NC bids from consideration for 2018-22 without #HB2 repeal. pic.twitter.com/m78L8UMo8z

– A lot of people didn’t want to go to work or school in Atlanta on Monday, and rightfully so. At a local high school, one student said he/she couldn’t “rise up” as their reason they couldn’t make it to school.

Meanwhile, a Georgia Southern professor just did everyone a favor and straight up canceled class.

– Russia has been in the news a lot lately for political reasons, and now it’s back for sports reasons.

Russia’s government has boosted their contribution to the 2018 World Cup budget by 19.1 billion rubles ($325 million U.S.), but they’re not saying why. This also increases the percentage of the overall spending now coming from the government. It flies in the face of previous efforts to cut the event’s costs as well. Here are more details from The Associated Press:

Total spending rises to 638.8 billion rubles ($10.8 billion), with all of the increase coming from federal budget funds, which now make up almost 55 percent of total spending.

The increase dwarfs previous attempts to cut costs by reducing the number of high-end hotels to be built and trimming expenses on other infrastructure.

There was no immediate comment by the World Cup organizing committee on the reason for the increase, which was announced when an updated budget document was published on the government legal database.

The Texas Lt. Gov. Dan Patrick has weighed in on Tom Brady's missing jersey, asking for help from the Texas Rangers pic.twitter.com/3iuKO2n6kI

Except those baseball Rangers seemed eager to help!

@PatrickSvitek @DanPatrick This is a bit out of our job description, but we'll see what we can do. pic.twitter.com/4e6PWfaMVc

– Finishing up on the Super Bowl, newspapers from around the country had great headlines and Super Bowl 51 had the 5th most viewers of all time.

– Say it with me… JAMES ENNIS WITH AUTHORITY!

– Speaking of basketball, the Chicago Bulls and Sacramento Kings game had a lot going on.

Dwyane Wade hits game-saving, go-ahead jumper in closing seconds after Bulls give up a 52-25 second-half run to the Kings (all angles) pic.twitter.com/Lzr5Mvzle9

Dwyane Wade makes big play on offense, follows it up with a big play on defense pic.twitter.com/lFgJFouBKk

So Cousins ties it, and-one, misses the free throw. Wade scores, Cousins goes for a 3, gets fouled, no-call, flips out, T’d up. NOT DONE 1/2

Game is over, and Cousins flips out over the no-call, picks up a tech, is tossed with 1.1 seconds, and so he’ll be suspended next game. https://t.co/IKk4pgaKpk

Cards Against Humanity had a great Super Bowl ad.