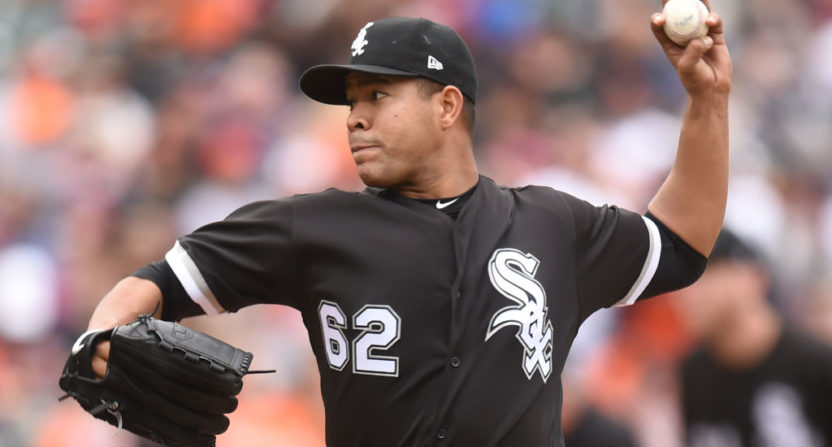 A couple of unlikely baseball reporters break the news on a blockbuster MLB trade, the Knicks still don’t know what they’re doing, and a main goes to great lengths to show how much he hates his neighbor. We’ll get to those stories and much more here at the Friday Cheat Sheet…

The Chicago Cubs and Chicago White Sox agreed to a rare trade together, and especially rare in terms of its magnitude. The Cubs landed annually underrated left-hander Jose Quintana from the White Sox in exchange for four prospects, with outfielder Eloy Jimenez (a monster; arguably a top-5 prospect in baseball) and pitcher Dylan Cease (filthy stuff, a matter of staying healthy/durable) headlining that haul.

But even more interesting than the blockbuster trade was who had the scoop. That would be Reddit users KatyPerrysBootyHole and WetButt23.

Knicks continue to not know what they want, put Melo trade talks on hold

It appeared the Knicks may finally be on the verge of trading Carmelo Anthony to the Rockets or Cavs… but now it turns out they may want to keep him. Who the hell knows with them.

Story posting soon with @RamonaShelburne on ESPN: The Knicks have paused Carmelo Anthony trade talks with Houston and Cleveland.

– We took a look at the biggest MLB storylines entering the second half (which begins today).

– Lonzo Ball wore Adidas shoes in the Summer League last night, after wearing Nike the night before. And he’s playing much better in these other brands’ shoes than he did with his signature Big Baller Brand shoes!

– Missed dunks don’t get more awesome than this.

– We put together a Game of Thrones Season 7 roundtable/predictions to get ready for the season premiere on Sunday.

– A Washington man mowed a message for his neighbor to show how much he hates the neighbor’s purple house.

– Scary, sad one here: The Walking Dead has paused production after a stuntman was seriously injured on the set.