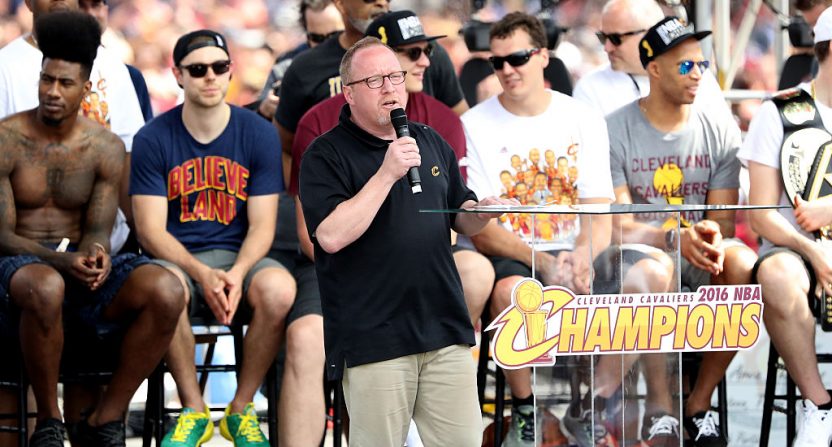 The NBA Finals may be over, but the basketball world is keeping busy ahead of the NBA Draft. Things are particularly busy in Cleveland, as the Cavaliers fired their GM and are apparently pursuing Bulls star Jimmy Butler. Meanwhile Markelle Fultz nearly made a big brand decision and a “Last Chance U” coach is in trouble. Let’s  get to all that and more at the Tuesday Cheat Sheet… 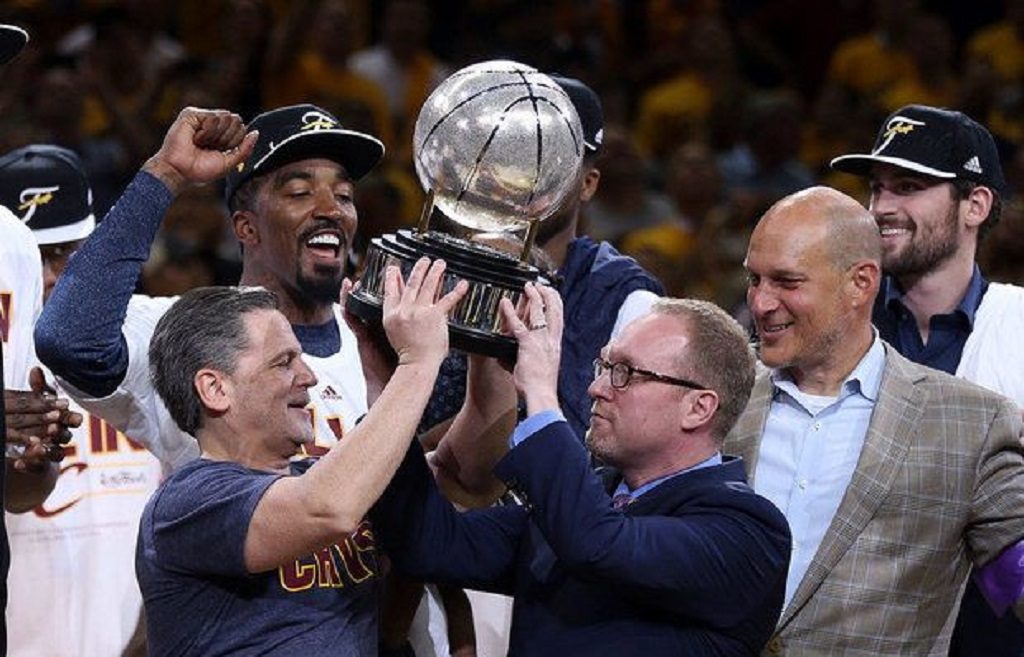 It was a bizarre, eventful day for the Cleveland Cavaliers.

The organization announced general manager David Griffin and owner Dan Gilbert have mutually decided not to extend his current contract, meaning Griffin is a free agent and the Cavs have an opening in their front office.

Cavs and GM, David Griffin, have mutually decided not to extend current contract.

Then there is this…

Billups doesn’t have NBA front office experience but is widely regarded around the league as a potential executive. He expressed interest in interviewing with the Denver Nuggets about a front office position back in 2016. This summer, he was set to interview with the Atlanta Hawks for the GM jobbefore getting passed over for Warriors assistant Travis Schlenk. With that said, going to the Cavs (in theory) would be one of the most high-pressured, difficult jobs in the league.

Gilbert and the Cavs continue to be brazen and bold for no particular reason. Keeping Griffin –who’s been one of the most stable components in recent years for a historically creaky franchise — would have made too much sense. Instead, Cleveland didn’t let him go elsewhere, opted to pass on re-signing him in the process, and will likely replace him with an exec with zero tangible front office experience. Despite recent success, it’s never easy being a Cavs fan with Gilbert’s constant fumbling.

Shortly before firing Griffin, the Cavaliers emerged as a potential landing spot for Jimmy Butler

The Cavs are looking into multi-team scenarios that would allow them to acquire star swingman Jimmy Butler from the Chicago Bulls, according to ESPN’s Marc Stein:

The Cavaliers, per league sources, have been working today on assembling multi-team trade scenarios to try to acquire Chicago's Jimmy Butler

The Cavs obviously have to rope in at least one more team to provide the assets Chicago would surely demand but, sources say, are trying.

Additionally, The Vertical’s Adrian Wojnarowski says that the Bulls and Minnesota Timberwolves “made preliminary” contact on a Butler deal, and mentions Minnesota’s assets that could potentially allow for a deal to get done:

Sources: Chicago’s price for Jimmy Butler remains elevated, but Minnesota has assets and interest. Sides made preliminary contact this week.

And then there of course have been the rumors of the Boston Celtics going after Butler, especially after the Celtics acquired an additional future first-round pick with the Markelle Fultz trade.

Markelle Fultz is almost certainly going to be the first overall pick at this Thursday’s NBA Draft, with the Sixers having traded up with Boston for the pick in a blockbuster deal over the weekend. As with most surefire top picks, Fultz has already inked a deal with an athletic wear company; last week, he signed a multiyear deal with Nike:

As with all these prospects, Fultz had multiple companies courting him, but it might come as a surprise to learn which other company Fultz was considering, if only briefly:

That’s according to this report from The Washington Post, which says Fultz did indeed consider that option, if only briefly:

In an exchange relayed by The Post’s Babb, the young prospect discussed the idea with his trainer, Keith Williams:

Williams: You sure you don’t want to sign with them?

Fultz: I was thinking about it, but then I would make him money, though.

Williams: Or lose them more money.

Williams: I don’t think they’ve got money to sign nobody. 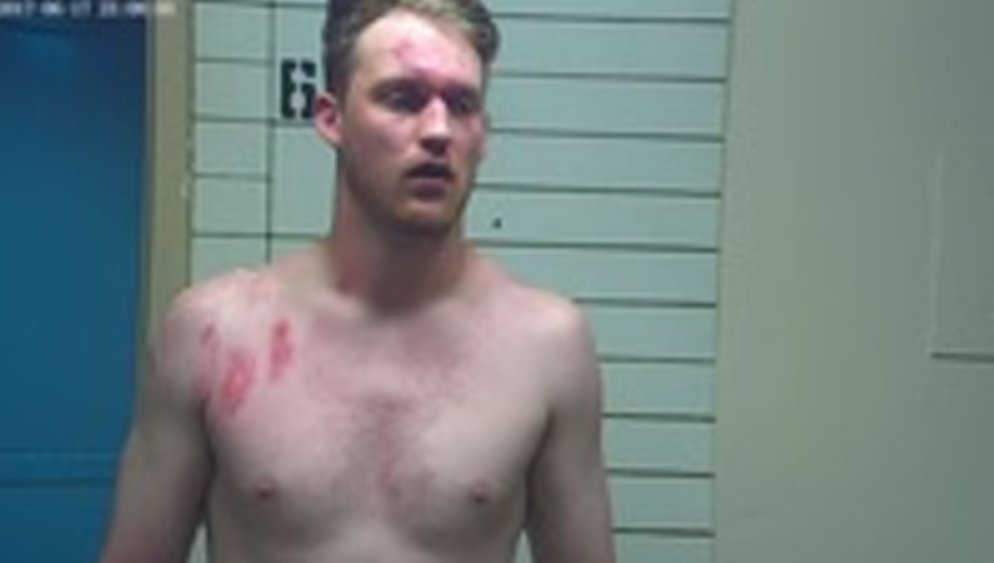 Things aren’t going so well for Bo Wallace. The former Ole Miss quarterback wasn’t chosen in the 2015 NFL draft and didn’t earn a contract following his tryout with the Kansas City Chiefs, but has wound up as the quarterbacks coach at East Mississippi Community College (the place featured in Netflix’s Last Chance U, which will have its second season premiere in July) in January. However, that job may be in some jeopardy following his arrest for driving under the influence over the weekend. Antonio Morales and Will Sammon of the Jackson Clarion-Ledger have more:

…The arrest took place at 11:06 p.m. in Clay County and was made by the West Point police department. Wallace was released at 1:16 a.m. Sunday after he was bonded out. Bond was set at $813.50, according to the Clay County Sheriff’s office.

According to EMCC coach Buddy Stephens, Wallace took prescription medication during the day, fell asleep at the wheel while driving after working a youth camp, got into a wreck and was arrested after the accident.

Stephens said he would continue to gather information on the matter. 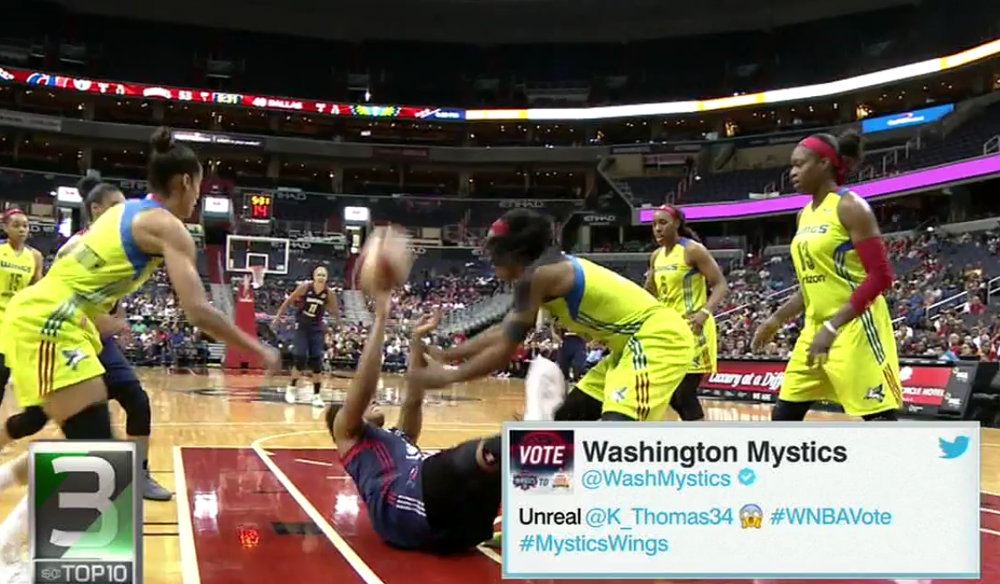 – A WNBA star hit an absolutely ridiculous shot while lying down on the floor.

– A Toronto Raptors fan vowed to get a dinosaur tattoo on his ass if Paul George doesn’t come to Toronto. I can’t wait to find out which dinosaur he goes with.

That would be quite the tattoo. And it looks like there’s a good chance it’s going to happen; the chances of George winding up with the Raptors seem pretty slim, and the post already had 11,700 upvotes as of Sunday night, just four hours after it was initially posted. The poster has been quite adamant he’s going to live up to it, too. But just in case he doesn’t, someone else who commented on it will at least partially satisfy the internet’s thirst for tattoos:

– Meanwhile an Indiana store gave away all of its Paul George gear for FREE after Los Angeles Lakers’ report.

We made a couple of updates to the website. Have at it. #byepg13

– Our college football previews continued on Monday with a 2017 MAC position preview looking at the conference’s QBs.

– Our own Brad Gagnon continued his NFL preview content by looking at four NFL trades or signings that should go down this summer. Here’s a look at number 1:

1. New England Patriots trade Malcolm Butler to the Carolina Panthers: The Pats flirted with trading Butler to the New Orleans Saints before the draft, but that ship has sailed now that New Orleans has used a first-round pick on Marshon Lattimore.

For one thing, if we’re being specific, it appears the players have Herman in some sort of neck breaker move and not an RKO because Herman is on his back and people take the RKO on their stomach. Also, an RKO is supposed to be a surprise to the recipient of the move and everyone else around them. This seemed like it was intricately mapped out and planned like it was a 401K.

– HBO’s Real Sports looked at bullfighting, which is still popular in Spain and dangerous for matadors.

“About two weeks ago, my daughter said, ‘Daddy, I want to play the drums.’ And I said, ‘Okay, you want me to teach you?’ She said, ‘Yes.’ And then I said, ‘Do you want to get up in front of 20,000 people in Iceland and play?’ And she said, ‘Yes.’ So ladies and gentleman, welcome the next generation. There’s another Grohl on the drum set now.

– The Kansas City Royals believe their success as of late is due to an espresso machine.

“My dream is to play a game here in China some day,” Brady said. “We had an opportunity I think 10 years ago, and my team was going to play here. Unfortunately it didn’t work out. But one day I hope that there are many games here and over the course of the year, because it’s such a great sport and because I love it so much. To bring that here and to bring the discipline and to bring the incredible strategy involved, it’s just a great event and hopefully a lot of the Chinese people would enjoy it.

Not voting for our players is a crime.

Freaking out like a little kid in a candy store right now.