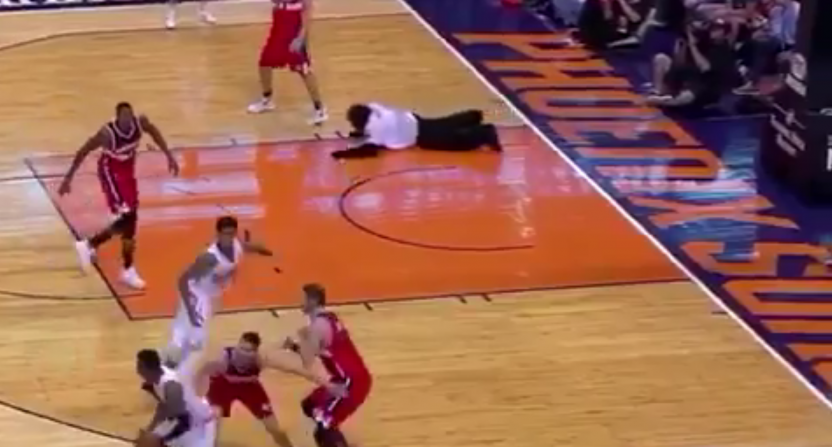 There were only three NBA games Tuesday night, but all three provided us something to celebrate. Dirk Nowitzki scored his 30,000 career points, reminding us just how incredible his career has been.

The Phoenix Suns’ gorilla seemed to momentarily forget where he was.

Oh and Russell Westbrook? He does what he wants.

Welcome to the Cheat Sheet.

We don’t really talk enough about how great Dirk Nowitzki is. He’s been one of the best players in the NBA for going on two decades, he’s made 13 All-Star teams, he’s got an MVP award and a championship ring. And as of Wednesday night, he’s got 30,000 career points.

THE SHOT HEARD AROUND THE AAC! CONGRATS ON 30K DIRK!! ?? pic.twitter.com/r8QoozVmxZ

After scoring that 30,000th point, on a classic Dirk fadeaway nonetheless, the Mavericks ran a touching tribute on the video board at the American Airlines Center.

Moments after he hit his 30K point, this tribute video ran in-arena for @swish41! #Dirks30K pic.twitter.com/kvuR9ZRGHl

Meanwhile, Dirk’s longtime shooting coach was on the verge of tears.

And LeBron James, who is likely to get to 30,000 some time next season, chimed in on his off day with a hearty congratulations.

Congrats to Dirk Nowitzki, who is truly one of the best basketball players of our time—and of all-time.

Russell Westbrook goes off in Thunder loss to Trail Blazers

Tuesday night’s Thunder-Blazers game likely served as a Rorschach Test for how you view Russell Westbrook.

If you think Westbrook is a viable MVP contender, you saw him put up 58 points in a 126-121 OKC loss to Portland and shook your head that his teammates couldn’t come through for him. If you think he’s an overrated ball hog, you lamented that all the stats in the world don’t mean anything in a loss.

But let’s just marvel at this stat line: 58 points, 21-of-39, 13-16 from the free-throw line. On the other hand, Westbrook had only nine assists, three rebounds, three steals and a block.

This game was basically Westbrook’s MVP candidacy in a nutshell: The numbers were gaudy, but the team results weren’t there.

Even if you think Westbrook is overrated, despite the fact he’s averaging a freaking triple-double, you have to feel for him a little when you look at Tuesday’s box score. Twelve players got in the game for the Thunder, and only one besides Westbrook scored at least 12 points. No one grabbed double-digit rebounds. The team had 17 turnovers and only 16 assists and committed 25 personal fouls.

It doesn’t look like Westbrook will win MVP—James Harden’s numbers are almost as crazy, and he’s on a better team—but we need to appreciate what an incredible season he is having.

– Now the moment you’ve been waiting for: What in holy hell was the Phoenix Suns’ gorilla mascot doing here?

Come get ya mans, @Suns pic.twitter.com/sfapmmGm5V

– The World Baseball Classic rolled along Tuesday night (Wednesday in Tokyo), with Cuba beating China 6-0. One of the game’s stars was Yoenis Cespedes’ half-brother, Yoelkis.

Yoelkis Cespedes doubles off the wall in right to push Cuba's first runs across the plate in the bottom of the 4th against China! #WBC2017 pic.twitter.com/pGAcwdn0Uo

– Meanwhile, Team USA’s Chris Archer hopes the WBC will be a force for national unity. Good luck with that, Chris.

– Nike has developed a “Pro Hijab” for Muslim female athletes.

I'm so proud of @Manirostom & the @nike team. Unbound by convention, we strive for #equality. #Nike #Hijab drops Fall '17. pic.twitter.com/lDMmfkpQox

– Once known for its gimmicky “Dunk City” identity, Florida Gulf Coast is now somewhat of a powerhouse.

– Former Colts GM Bill Polian claims he had a first-round grade on Tom Brady. Of course, if that were actually the case, Brady wouldn’t have lasted until the sixth round.

– A five-year-old girl became the youngest ever National Spelling Bee contestant. What had you accomplished by age five?

Your lesson from last night: Never trust a guy in a gorilla suit.