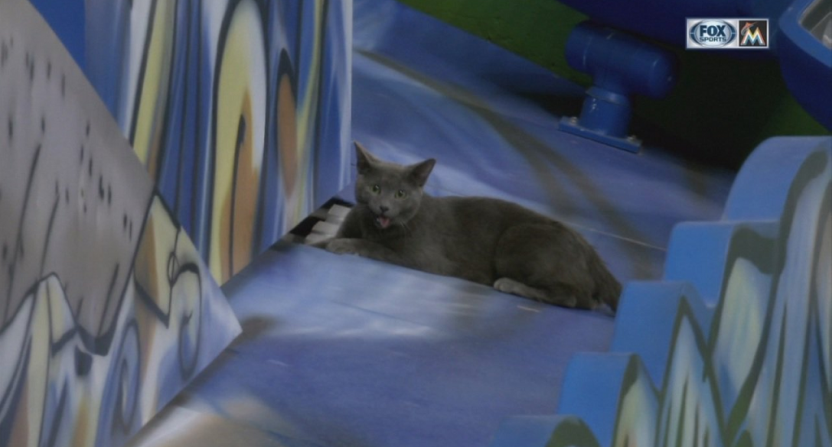 A full night of sports Tuesday was somewhat marred by a scary attack on a German soccer team.

Still, the games must go on, and baseball did not disappoint, with a three-homer game, an incredible comeback, a robbed home run, a cat in the park and a walk-off squeeze play. We’ve got all that and more, right here.

Borussia Dortmund gets scare with explosion outside bus

In the scariest story of the day Tuesday, three explosives detonated just outside the Borussia Dortmund team bus, putting a scare into the team and injuring center back Marc Bartra.

"Bomb explosion at the team bus at the team hotel. Players in safety. No danger in and around the stadium. More info to follow." https://t.co/spOtkyVbrw

The bus was on its way to a Champions League match against AS Monaco, which was postponed until Wednesday on account of the explosions.

Other than Bartra, who reportedly broke a bone in his wrist, no one else was hurt. Still, the whole ordeal must have been extremely frightening for the players involved.

Dortmund’s CEO Hans-Joachim Watzke said: “The whole team is in a state of shock, you can’t get pictures like that out of your head.

“I hope the team will be in a position to be able to compete tomorrow on the pitch. In a crisis situation like this, Borussia pulls together.”

There was at least one heart-warming angle to a very scary event: Dortmund fans offered lodging to Monaco supporters who had come for the game Tuesday and didn’t know what to do after the postponement.

Now, pretty much all we can do is wish Bartra a speedy recovery and hope authorities can locate the culprit of the explosion.

Yoenis Cespedes is the type of baseball player who sometimes does things you just don’t believe.

And on nights like Tuesday, when the Mets played the Phillies at Citizens Bank Park, there may not be a more fun player in baseball to watch.

In his first at-bat, in the first inning, Cespedes hit a 3-run home run off Clay Buchholz.

He popped up in his second at-bat, but in his third, he launched a solo blast off Adam Morgan in the fourth inning.

In his fourth at-bat, in the fifth inning, he crushed another solo shot off Morgan.

Believe it or not, none of those home runs were Cespedes’ hardest hit ball of the evening. That came in seventh inning, when he roped a double off Joely Rodriguez.

And, as you can see here, none of Cespedes’ four hits Tuesday were cheapies.

By one measure Cespedes hit more hard Tuesday than anyone has in a game during the relatively short existence of Statcast.

All four of @ynscspds’ hits tonight (3 HR and a double) qualified as Barrels.

Entering Tuesday, Cespedes was off to a rough start, hitting .154/.267/.308, but he undid that in a single day. The outfielder’s home run barrage gives him four for the season, tied (with several other players) for most in the Majors. He hit more home runs Tuesday night than some team have all season.

Yoenis Cespedes hit as many home runs today as the Red Sox have hit all season.

Cespedes finished the day 4-for-6 with three home runs and five RBIs and the Mets beat the Phillies 14-4. That’s, uh, pretty good.

– There was lots of good baseball Tuesday night, outside of Cespedes. The Angels-Rangers contest was particularly exciting, with Los Angeles coming back from down 5-0 in the seventh and 3-0 in the ninth, Mike Trout robbing a homer in the 10th and Carlos Perez walking off with a squeeze bunt. Awesome game.

A big hit in extras? Not on @MikeTrout's watch. pic.twitter.com/MpsS0jD5L2

– Astros outfielder George Springer led off his team’s game against the Mariners with a home run, becoming the first ever player to hit leadoff dingers in four of his team’s first nine games.

– A cat found its way into Marlins Park and wound up atop the outfield home run sculpture.

A cat intrusion on #NationalPetDay? How purrr-fect. ?

– The Oakland A’s are pulling the tarp off the upper-deck seats at Oakland-Alameda Colosseum, as if they really needed the extra space.

On Father’s Day, the light blue-and-grey look is back with subtle changes from last year. More blue, mainly, and ? from @StanceBaseball pic.twitter.com/LCL8xJPOZk

– Baseball’s revenue crossed $9 billion last year, with team values increasing by 19 percent, according to Forbes. If baseball is dying, the owners sure aren’t feeling it.

– Matt Ryan has been watching the second half of the Super Bowl on repeat, just to torture himself.

– There may not be a can’t-miss quarterback in this year’s NFL Draft, but the Cleveland Browns are considering drafting a signal-caller first overall anyway.

– In a fascinating story on The MMQB, we learn that Tom Brady’s missing Super Bow jersey almost tested the strength of U.S.-Mexico relations.

– Washington signed football coach Chris Petersen to a new extension that makes him the highest paid coach in the Pac 12. It won’t be easy to build a real football power at Washington, but Petersen is the man to try.

– The Timberwolves’ new logo leaked Tuesday, a little before the team was set to unveil it. The design isn’t atrocious, but it’s also not all that inspiring.

This, via SB Nation’s Jon Bois, is awfully fascinating, though it might take more than a moment.