The verdict is in, and Aaron Judge is a strong man

Giancarlo Stanton entered the Home Run Derby as the defending champion playing on his home field, so naturally, he took an early exit after coming up just shy of getting by Gary Sanchez in a monster first-round matchup. With Stanton down after a 17-15 setback, Sanchez opened the door wide open for Yankees teammate Aaron Judge to walk his way to the Home Run Derby crown, who also overcame a strong showing by Marlins slugger Justin Bour in the first round.

By the end of the night, Judge had powered his way by Cody Bellinger of the Dodgers and Miguel Sano of the Minnesota Twins in the final round. Did I mention Judge brought some monster power?

.@TheJudge44 hit FOUR homers over 500 feet, including this 513-foot blast – longest of the @Tmobile #HRDerby. pic.twitter.com/nWCYOQVVlY

The home run derby committee made the home favorite play Wichita State in the first round.

And if you took the graphs of all of the home runs hit during the Home Run Derby by all of the players, you have what looks like a fireworks display.

All 15.7 miles of HRs… What a great derby! Congrats to @TheJudge44 pic.twitter.com/wLxCkDPXvo

As for the broadcast crew, it seems the ESPN announcers were leaving a lot to be desired…

everyone yelling over top of each other and trying bad catchphrases. It's a mess

No offense, but I’m not sure Logan Morrison does this.

This is great and all, but I would’ve rather seen Logan Morrison.

The celebrity softball game was pre-recorded the previous day, but who cares? The wait was worth it alone just to see Andre Dawson hit not one, but TWO home runs that showed the old man’s still got his swing down. 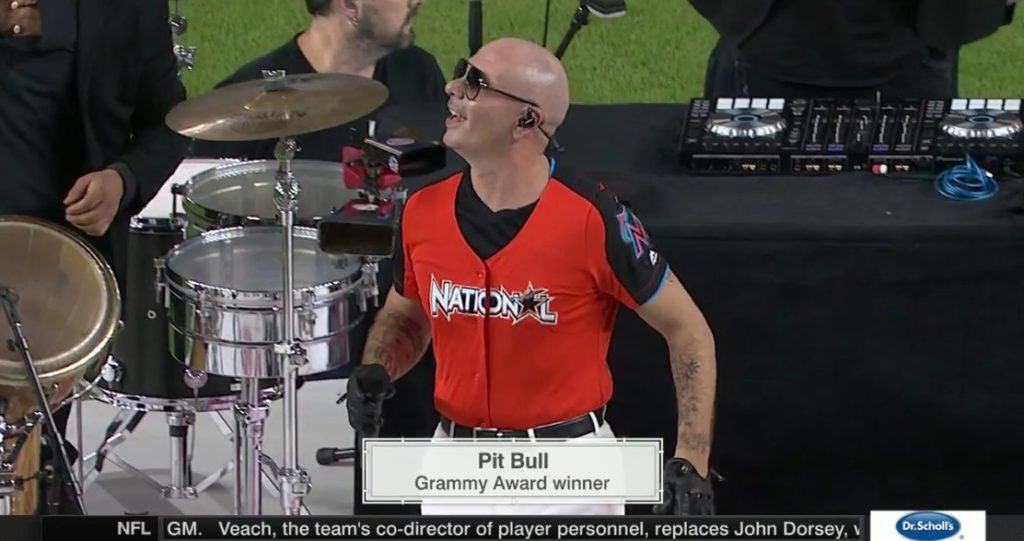 – What the heck was Pitbull wearing at the Home Run Derby?

– Guess who caught a home run ball at the Home Run Derby? Joel Embiid, of the Philadelphia 76ers. He does have a height advantage in the crowd working for him.

– Don’t let all the all-star game buzz distract you from the fact that Texas lost to Kansas in football, and Marlins owner Jeffrey Loria is a petty man.

– Some breaking news overnight, with Adolphus Washington being arrested on a weapons charge at a water park.

– If you watched Last Chance U on Netflix, here is an update on Ronald Ollie.

– Local news going off the rails is always fun, right?

– The New York Jets want to build a helipad at their practice facility despite being two minutes from an airport.

– Which NHL teams are heading in the right direction?

– Noted hot dog expert Joey Chestnut settles the hot dog debate once and for all. Now we can all move on.

– Mark Cuban still wants the Mavs in the Eastern Conference of the NBA.

After all these years, the decision to never hire an assistant seemed like a bad strategy by Bowser.