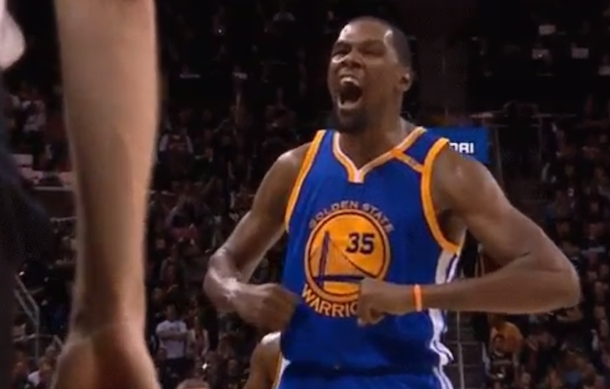 Wednesday was moving along like a pretty normal day. Many were preparing to see if the Cavs could actually steal a win away from the Warriors later in the night and then BOOM! College football became front and center for the day after Bob Stoops made the surprising announcement that he was retiring from his duties as the head coach at Oklahoma.

Those two events and more are what make up the filling for the jelly donut that is today’s Cheat Sheet.

If the Cleveland Cavaliers were going to make this an actual competitive NBA Finals, they were going to have to find a way to win Game 3 against the Golden State Warriors on Wednesday night.

Led by Kyrie Irving and LeBron James, the Cavs were able to get off to a quick start during the first quarter.

The @cavs strike first. Kyrie for two on #NBAonABC!#NBAFinals pic.twitter.com/R9AWG8JXNI

This may surprise some, but guarding LeBron is actually a pretty hard task.

But the Warriors were able to keep the game close and eventually ended the first quarter with the lead thanks to Kevin Durant and the fact that the Cavs thought it would be a good idea to take LeBron out of the game.

Draymond up top for KD!

Shaun Livingston out there slapping the backboard pic.twitter.com/zQtQJqI5T0

The Cavs have played their best quarter of the #nbafinals17 and still trail by 8 points. Warriors on another level.

Cleveland began the second quarter with an early dunk from… Kyle Korver?

Both teams continued to trade baskets throughout the rest of the second quarter, but Golden State still held the lead as the first half came to a close.

The @warriors knock down 12 first half three-pointers.

Thanks to Irving stepping up, the Cavs were able to climb back from their six-point halftime deficit and actually take the lead midway through the third quarter.

Kyrie is up to 21 points. @cavs have cut the deficit to one on #NBAonABC. pic.twitter.com/FAvxIZkHmr

Kyrie. Is. Going. To. Work. #DefendTheLand

After three quarters, Cleveland led 94-89 and the chances of them winning Game 3 were starting to seem believable. But the Warriors just would not stay down in the fourth and final quarter.

With the Cavs up 113-111 late in the fourth quarter, Durant proved once again why he is the modern day Iceman. So cold.

The Cavs got one more try to attempt and leave the building with a win. They put the ball in Irving’s hot hand once again, but the Warriors were able to get him to settle for an outside shot that was not even close to going in the hoop.

As hard as Cleveland fought on Wednesday night, it still was not enough to defeat mighty Golden State. The Cavs will now need a miracle to prevent the Warriors from sweeping the series and winning their second NBA championship in the last two years.

3-0. Is the knockout punch next? pic.twitter.com/ZdttKoqfrC

No one in this millennium has ever experienced a season of Oklahoma football without Bob Stoops coaching on the sidelines. Hired in 1999, the Sooners head coach made the surprising decision to retire on Wednesday after 18 seasons with the school.

Bob Stoops will tell his Oklahoma team he’s retiring, per Oklahoman newspaper. Stoops has the most wins in Oklahoma history (190). pic.twitter.com/RDiE4IHLiR

Bob Stoops turned this, into this. pic.twitter.com/25KMpEmDzc

Stoops experienced a ton of success while at Oklahoma and coached a number of players during the past two decades who went on to play in the NFL including Adrian Peterson, Sam Bradford, Demarco Murray, Kenny Stills, Sterling Shepard, Jermaine Gresham, and Gerald McCoy.

Coach I just want to thank you for all the love you’ve shown my family. Beyond football you’ve shown me what being a true man is all about

No one knows the real specific reason for why Stoops has decided to suddenly retire. He claimed his decision was not health related and the school is not currently dealing with a tumultuous life-ruining scandal.

At least not yet.

Good news is Bob Stoops retiring means Okl can’t be held accountable for any possible illegal behavior under his tenure, that’s how it works

– Some dude got bored and decided to have a funeral for his ketchup bottle (no, really). But this would be even better if he pissed everyone off by spelling it catsup.

Dear @Morrisons why has my unopened ketchup decided to end it’s life like this? It took the brown sauce and a stock pot with it. pic.twitter.com/qxXJmTuSfb

We have had a service for our departed ketchup, the kettle conducted the service and the surviving stock pots gave a beautiful eulogy pic.twitter.com/xkqOmQ0F7q

So you want me to dig him up? pic.twitter.com/PN6FdAb7Q2

– In today’s edition of “Movies based on unoriginal ideas” are photos from the upcoming movie “Mary Poppins Returns”. Also why does the title make it seem like Mary Poppins is coming back to seek vengeance?

It’s a jolly holiday—Mary Poppins is back! See our gallery of exclusive, first-look photos from #MaryPoppinsReturns: https://t.co/iJ0DzWUIm4 pic.twitter.com/0JMJIhUsYY

– Scientists recently found the fossil of a 100 million year old bird. Try and top that, because you won’t.

– Toronto Maple Leafs center Auston Matthews recently got an amazing tattoo of a lion wearing a crown. Perhaps this is the new way kids ask for a trade these days?

– Rapper Gucci Mane can now say he’s a platinum recording artist after it was announced on Wednesday that his single “Both” featuring Drake has sold over a million copies. I think this calls for Mr. Mane to add another scoop to that ice cream face tattoo of his.

– If not for the timestamp, one would think this picture of an Ole Miss track athlete was from 1985 and not Wednesday. It’s just so beautiful.

– Apparently, not even Lonzo Ball can even afford to buy his own brand of $495 shoes.

Don’t forget to have fun this summer kids.