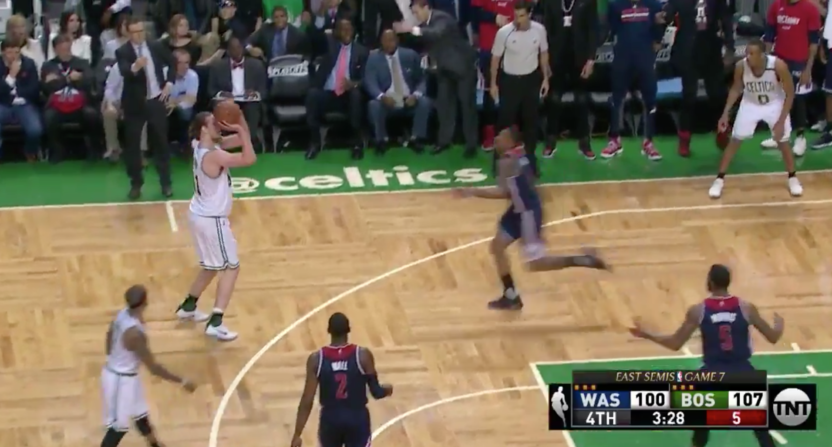 On Monday night, we welcomed Kelly Olynyk to the club of unlikely sports heroes. Aaron Boone and Dexter Jackson welcome him with open arms.

Thanks to Olynyk’s improbable 26 points off the bench, the Celtics defeated the Wizards 115-105 to advance to the Eastern Conference Finals. Meanwhile, the Penguins beat the Senators 1-0 in a game that was about as uneventful as its score indicates.

Oh also, Zaza Pachulia, of all people, is at the center of an NBA controversy.

If you’d been asked Monday afternoon to predict who would be the Celtics best player in Game 7 against the Wizards, you would have surely said Isaiah Thomas. As a second option, you’d have named Al Horford or Jae Crowder. Maybe Avery Bradley.

The point is, you would not have picked Kelly Olynyk.

And yet there was Olynyk dropping 26 points on 10-14 shooting and dominating the fourth quarter as Boston prevailed over Washington, 115-105.

It was a huge performance for a guy who earlier this season had been pilloried for his dirty play and who had previously not dropped more than 14 in a playoff game.

Kelly Olynyk scored 26 points for the Celtics in Game 7

He totaled 26 points in his previous 3 games combined pic.twitter.com/jK7YJmbKYE

Olynyk scored inside and out, but even as he kept getting buckets in the fourth quarter, the Wizards seemed uninterested in guarding him. He wound up with 14 points in the final period, with many (most?) of them coming on barely contested jumpers.

Kelly Olynyk goes off for 14 PTS in Q4. #ItsNotLuck#NBAPlayoffs pic.twitter.com/3MmH2qSvoD

Obviously the Celtics win wasn’t a one-man effort. Thomas scored a team-high 29 points and 12 assists, while Horford had 15, Crowder had 14 and Marcus Smart had 13.

On the Wizards’ side, Bradley Beal poured in 38 and Otto Porter Jr. added 20, while John Wall had an underwhelming 18 on 8-of-23 shooting. Olynyk’s nemesis Kelly Oubre didn’t play until garbage time as Boston’s bench out-scored Washington’s 48-5.

For D.C. sports fan, Monday was yet another disappointing playoff defeat. No Washington team has made the semifinals of its league since 1998, and all four franchises have been close multiple times.

The Wizards were underdogs in this series, and most fans would have been satisfied before the season with the promise of a second-round berth anyway, so in that sense the loss doesn’t hurt so bad. But given the city’s recent history, and given how Game 7 went down, the defeat definitely stings.

The Celtics will now face LeBron James and the Cavaliers. Good luck with that, guys.

Game 2 on Monday between the Pittsburgh Penguins and Ottawa Senators was not the most exciting hockey game you’ll ever see. In fact, it was fairly slow, with both teams playing defensive hockey and holding their opponent goalless until the third period.

Finally, with just under seven minutes to play, Phil Kessel slapped a shot past Ottawa goalie Craig Anderson to give his team a 1-0 lead.

Regardless when it happens.
A game-winner is a game-winner.#StanleyCup pic.twitter.com/iBE0mNhtIn

Other than the goal, the most notable thing to happen in Monday’s game might have been this vicious hit by Dion Phaneuf on Bryan Rust.

After Kessel’s score, the Penguins held on over the last seven minutes to even the series at a game apiece, as the teams head north to Ottawa.

This series has featured three total goals in seven periods, which probably isn’t what the average NHL fan wants to see. But on Monday, the Penguins definitely weren’t complaining.

The #Pens head to Ottawa with a tied up series. pic.twitter.com/nhmkUKfiG8

In Game 1 of the Spurs-Warriors Western Conference Finals series, San Antonio blew a lead of more than 20 points, in part because star forward Kawhi Leonard was sidelined with an ankle injury he suffered after landing awkwardly on Zaza Pachulia’s foot.

Well on Monday, Spurs coach Gregg Popovich expressed his extreme dissatisfaction with Pachulia, who he alleges has a history of dirty play.

When a reporter asked about Pachulia’s intent on the play that injured Leonard, Popovich said intent was irrelevant.

Popovich:Who gives a damn abt what his intent was? Ever hear of manslaughter? U still go to jail when ur texting, end up killing somebody pic.twitter.com/a9ZtTn2O1u

Of course, Pachulia defended himself against Popovich’s claims that he plays dirty, reiterating that he was only trying to challenge Leonard’s shot and that it’s not his fault Kawhi came down on his foot.

David West, whom Popovich mentioned as having a history with Pachulia, unsurprisingly defended his now-teammate, saying that Pachulia plays hard and that “things happen.”

Whether or not Popovich has a point here, a big part of his frustration is surely due to the fact that his team blew an opportunity to seize Game 1 on the road and now faces Game 2 without its best player.

– In by far the oddest story of the day, Moses Malone Jr. is suing James Harden for allegedly plotting to rob him.

– Here’s why Bryce Harper might be even better in 2017 than he was in his MVP season two years ago.

– Mike Trout is somehow having his best year yet. On Monday he homered for the fourth straight game.

It’s not even fair.

– The LaVar Ball intrigue never ends. We learned Monday that he’s president of the local homeowners association, he once trained pigeons to do back-flips and more.

– The Cleveland Cavs will have a Goodyear logo on their jerseys beginning next year.

– Like all NBA players, Al Horford has taken some criticism on social media. His sister absolutely is not having it.

– New Seahawks running back Eddie Lacy got a $55,000 bonus just for weighing under 255 pounds.

– Despite having had a vasectomy, Antonio Cromartie has another child on the way. It will be his 14th.

– The College Football Playoff will soon have a halftime show resembling that of the Super Bowl.

This gif is a little bit long, but the payoff is worth it.

The look on his face when he gets to the smallest one is priceless pic.twitter.com/lGS0q27Zl4