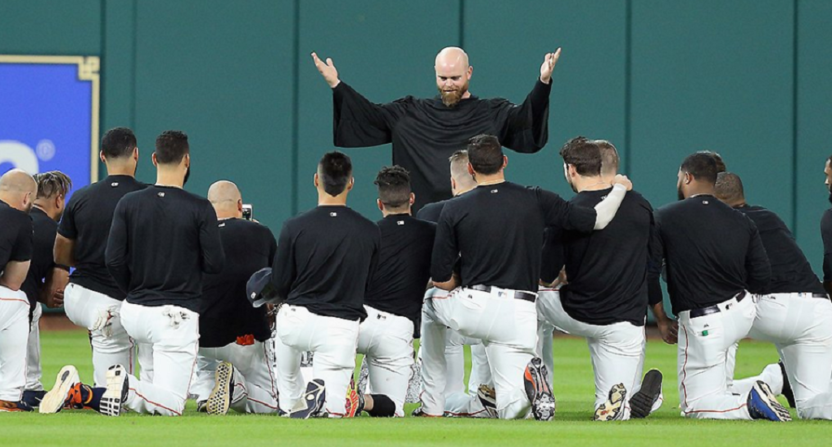 But don’t worry, we have some other actual sports stuff to get to as well in our Tuesday morning edition of The Cheat Sheet.

Kirk Cousins and Redskins still not on the same page

The Washington Redskins had until Monday afternoon to cut a long-term deal with quarterback Kirk Cousins, but the two failed to reach a deal on any long-term arrangement. That means Cousins will be playing under the franchise tag and looking to prove himself worthy of a big money contract on par with what some other passers are getting around the league. That may end up being a good thing for the Redskins, who may realize investing big money in Cousins may ultimately come back to bite them. Afterall, it’s not like Washington doesn’t know what it feels like to get burned paying a quarterback more money than he is ultimately worth, right?

The NFL now has a few notable players entering the last years on their respective contracts, which makes for quite the interesting free agent period a yera form now. Among those on the final year of their contract: Le’Veon Bell, Drew Brees, and Jimmy Garoppolo, to name a few.

Lonzo Ball was named the NBA’s summer league MVP, which apparently is an award that is awarded to the top player in the summer. Is he basketball’s answer to Tim Tebow? Although Ball did not play in the Lakers’ summer league final game due to a mild calf strain, he was there to accept his award.

But this being a sports world in which every thing must be debated, the awarding of Ball as summer league MVP was met with one of the hottest offseason takes we have seen in some time. You’ll never guess who delivered it. Oh, you did guess it, didn’t you?

Lonzo awarded Summer League MVP trophy BEFORE tonight's title game, in which he won't play? Huh? Don't love it. But who can argue?

Lonzo will quickly surpass LeBron as NBA's best passer. As body matures, could average double-digit rebs. Will be above-average 3 shooter.

You know this will lead to FS1 bringing LaVar Ball back in the studio for some back-and-forth soon. Remember this the next time you get frustrated over how FOX Sports has eliminated all actual worthwhile content from their home page. That includes Tim Brando, who was upset over the lack of college football coverage for some reason on Monday, July 17.

Thank God I play a lotta golf and have wonderful Grand babies to watch. Daytime sports television is beyond BAD! There is a CFB season ahead

Let’s go to https://t.co/MkNhaAdChp to see how much college football they have talked today… pic.twitter.com/yqVtaMLrhq

– Speaking of LaVar Ball, he was too busy shouting at his son LaMelo in front of an AAU team in a tournament, because LaVar Ball is probably a horrible coach.

– With the way this offseason is going for the Cavaliers, can anyone really blame LeBron James if he is frustrated, as reported?

– Scary moment on the baseball diamond last night with home plate umpire Chris Segal getting hit by a wayward bat.

– Mike Vick has become the expert on rebuilding a character image, and he’s now lending advice to Colin Kaepernick because some people think Kaepernick has an image problem.

– More details about the dognapping of Cowboys wide receiver Lucky Whitehead’s dog had some bizarre updates. Give the man his dog back. That’s not your dog.

UPDATE: Lucky Whitehead's dog has reportedly been found and is being held for ransom by a Dallas-area rapper https://t.co/cqLwXfXjdm pic.twitter.com/X7JSSB5K99

– The Houston Astros held a memorial service for the glove of Carlos Beltran because they were tired of seeing it go unused for so long.

– Subway is changing the way you order sandwiches, and it’s awesome.

– There may be a push to bring professional cricket to the United States.

– I am interested in trying out Atari’s next home console. You read that correctly, and the year is still 2017, not 1983.

– Hard to believe it, but Robocop is 30 years old. I still have never seen it. But then again, I still haven’t watched Game of Thrones. I have a massive backlog to binge through.

Kitten vs. human foot, round one, fight!