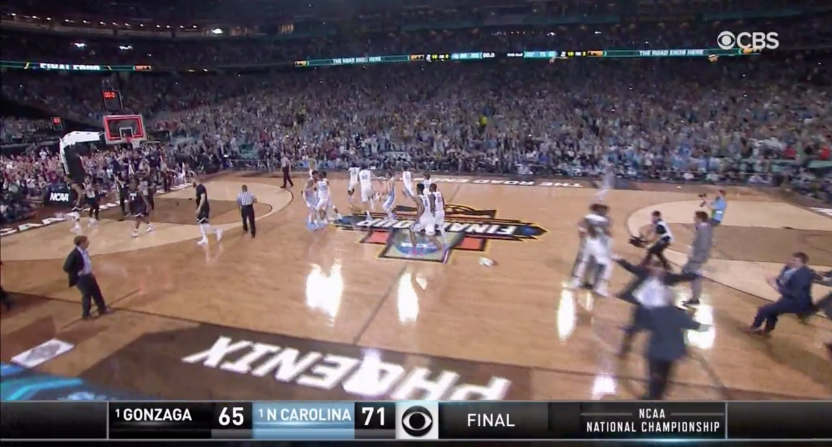 But in the end, it was dramatic, with North Carolina beating Gonzaga in a close game. Unfortunately, the game’s drama was undercut by a barrage of whistles that turned the second half into a free throw shooting contest and by some questionable calls down the stretch.

We’ll tell you all about it, right here in The Cheat Sheet.

One year after losing the NCAA Tournament championship game on a buzzer-beater, North Carolina didn’t waste a chance for redemption, beating Gonzaga 71-65 to deliver the school’s sixth title.

In an ugly game with long spurts of sloppy offense and, the Tar Heels eventually made one more play than the Bulldogs. Here’s the sequence that sealed North Carolina’s national title:

A large part of the reason North Carolina won was because as bad as Roy Williams’ team was, Mark Few’s Gonzaga squad was worse. The Bulldogs shot 33.9 percent from the field and committed 14 turnovers. Their leading scorer, Nigel Williams-Goss, shot 5-of-17. Their second leading scorer, Przemek Karnowski, shot 1-of-8. This will be a hard loss to swallow for Gonzaga players, who know they could have won this game on another day.

Of course, the sloppiness of Monday’s game doesn’t take away from North Carolina’s title or diminish the excitement in Chapel Hill. The Tar Heels earned this, with a 33-7 record and NCAA Tournament wins over Arkansas, Butler, Kentucky, Oregon and Gonzaga. That’s a 1, 2, 3, 4 and 8 seed, for anyone keeping score.

The win also has some historical significance. North Carolina becomes the third school to have won six or more NCAA Tournament championships, joining only UCLA and Kentucky.

At the end of the day, North Carolina showed that the ceiling was the roof.

The ceiling is the roof. pic.twitter.com/XWHWax1Mei

We’re giving the refs their own category so as not to detract too much from North Carolina’s well deserved national title.

But seriously, those zebras were bad.

For most of the game, the main complaint was the amount of whistles. Gonzaga and North Carolina were called for a combined 44 fouls and shot a combined 56 free throws. Gonzaga forward Zach Collins fouled out, and four other players wound up with four fouls. It was not the type of basketball anyone enjoys to watch.

And as the game went on, the refs made several calls and non-calls that drew heavy criticism. Such as the Collins’ fourth foul, early in the second half:

Or this play, in which Kennedy Meeks was out of bounds but North Carolina was awarded possession anyway:

Or if we really want to nitpick, even this inbounds pass on which Gonzaga appeared to illegally step over the end line:

The point is, the refs were the story of this game far more than you ever want them to be. Officials shouldn’t call fewer fouls just because it’s the national title game, but they also shouldn’t call MORE fouls. And in a sport in which everything at the end of games seems to be reviewed, how in the world did no one go to the monitor to notice that Meeks’ hand was out of bounds?

It’s always unfortunate to have to talk about the refs, but on Monday there was no getting around it. The officials made their presence felt, and now this game will always be remembered partly for the guys in black and white.

– In our discussion of the national title game, we can’t neglect to mention former Gonzaga star Adam Morrison. He was there, with skin the same color as his aggressively bro-y sleeveless shirt.

My man Adam Morrison fell asleep at the pool pic.twitter.com/dYLeyngjrU

– In non-national championship game news, it was Opening Day for much of MLB. Presumptive divisional favorites the Nationals, Astros, Indians, Red Sox and Dodgers all won (the Cubs had the day off), suggesting there may be more order to the universe than previously assumed.

– We have our first walk-off home run of the season, courtesy of 2016 MLB home run leader Mark Trumbo.

– A car caught fire outside the Oakland Athletics’ opener, which seems a bit ominous.

– Frank Kaminsky and Dan Dakich got into a heated Twitter argument about whether college basketball players should be able to profit from their likenesses.

– Chad Johnson is playing football in Mexico (and wearing a jersey that says Ocho Cinco), and he scored a touchdown in the first quarter of his first game.

– The NHL announced it will not stop its season for the 2018 Winter Olympics. That’s a dramatic blow to Olympic hockey.

– This pizza with Peeps on it should be illegal: