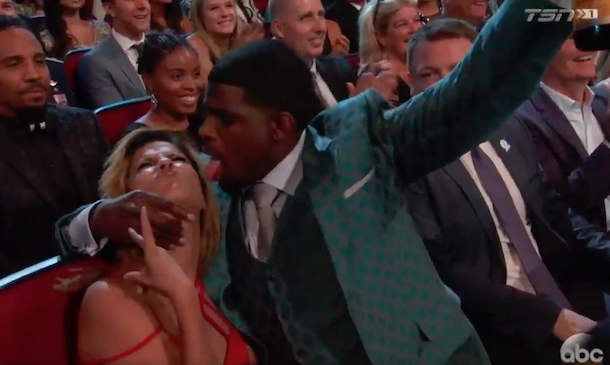 The MLB All-Star break may actually be the longest few days in the world of sports each and every year. It was no different on Wednesday, as almost nothing happened that was worth repeating to someone else. Luckily, ESPN decided to hold their annual awards show, and the Mayweather-McGregor press tour continued for the second straight day.

So let’s not waste any more time, and just get on to today’s Cheat Sheet.

The show started with Peyton Manning doing a monologue, and absolutely no one was safe from the wrath of jokes that other people wrote for Mr. Manning to say.

The #ESPYS for Best Breakthrough Athlete goes to @Dak!

The 2016 Offensive Rookie of the Year led the @dallascowboys to the best NFC record. pic.twitter.com/SgfedOVNtE

The Chicago Cubs won the ESPY for Best Moment and their team mascot was there to accept the award on their behalf.

When it came time for Los Angeles Clippers center DeAndre Jordan to present an award, his performance came up just a little short.

For the night’s biggest awards, it was pretty hard to argue with the winners.

The #ESPYS for the Best Team goes to @warriors!

If there ever ended up being a debate about who had the most fun at the ESPYs on Wednesday, Nashville Predators defenseman P.K. Subban would easily win that argument.

Even at the #ESPYS, PK Subban is having fun pic.twitter.com/ckwPbkJid3

Oh, and Julian Edelman is a straight up savage.

Julian Edelman with the line of the night. #ESPYs pic.twitter.com/0IWMFXzYNg

– A pair of men’s tennis notable names saw this year’s Wimbledon dreams go down the drain as both Andy Murray and Novak Djokovic were knocked out of the tournament due to injuries.

For the 2nd straight year, Sam Querrey knocks out the defending champion at #Wimbledon

So sad to see Andy Murray in obvious pain and difficulty – we’ve got so used to him winning but I’m sure he’ll be back on top form soon.

– The Mayweather-McGregor World Tour/Circus continued in Toronto on Wednesday. More trash was talked and Floyd Mayweather’s temper may not be able to stay cool for the remainder of this promotional extravaganza (hopefully).

– Who else would be seen at a house party giving Demi Lovato a piggyback ride other than Rob Gronkowski? The Madden curse is still strong with this one.

Our team up in Boston, @Kiss108, had front row seats to the coolest house party ever ft. @ddlovato & @RobGronkowski! ?#SNSHouseParty #Boston pic.twitter.com/srpZD8pp1d

– A dunk from the NBA Summer League might actually have been the most exciting thing to happen on Wednesday. Either way, try and keep your mouth closed while watching this.

JOHN COLLINS WE ARE NOT WORTHY!!! ? pic.twitter.com/3urJblnWfo

– Speaking of the NBA, apparently Tampa Bay Buccaneers cornerback Brent Grimes almost tried to snag a roster spot in the NBA’s developmental league. This according to the charming mouth of his wife Miko.

– In case anyone has an extra $20,000 lying around and wants to buy a sandwich that cannot be eaten, KFC has got the answer.

KFC carved a meteorite into the shape of a sandwich, and you can buy it for $20,000 https://t.co/MRjYg9oiyx pic.twitter.com/rbQg8dOpDl

– Since everyone just loves golf analogies so much (okay, maybe not), Green Bay Packers quarterback Aaron Rodgers admits that he is on the, “back nine,” of his NFL career. Someone get this guy a tissue.

@AaronRodgers12 tells me he’s on the back 9 of his career and much more…. full story here… https://t.co/N6BucsZCBq pic.twitter.com/cuYnQHcs71

– This may be fake (please, please be fake), but it looks like Kid Rock may be running for U.S. Senate soon. We’re basically just waiting for Snoop Dogg to announce he’s running for office at this point now.

Kid Rock is running for U.S. Senate and this is the background of his campaign page, https://t.co/ySHl8dnFcx. pic.twitter.com/9VwfqsefVB

This is a bit longer than a moment, but it is a definite must-watch for everyone who has eyes.