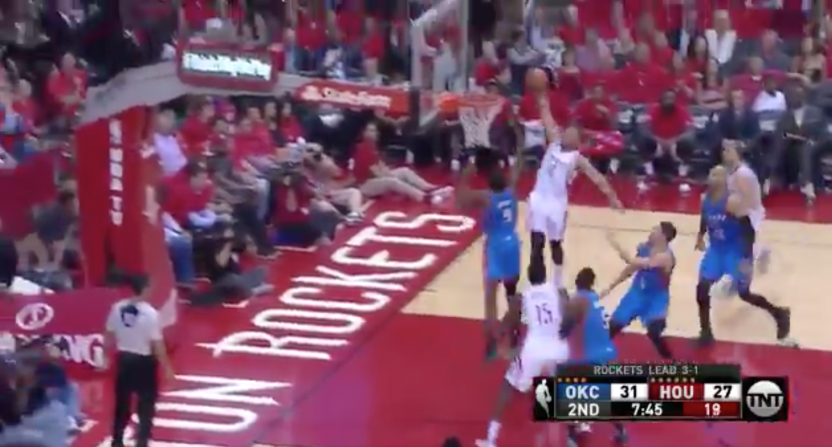 The most exciting player in the NBA has played his last game of the season.

The Houston Rockets beat the Oklahoma City Thunder on Tuesday to win the first-round series 3-1 and eliminate OKC. That means no more Russell Westbrook until the fall. He’ll contribute no more mad dashes to the basket or impossible pull-up jumpers or unprecedented stat lines. The playoffs won’t be the same without him.

In other news, the Spurs beat the Grizzlies and the Jazz beat the Clippers, with both teams going up 3-2 in their respective series.

Oh and Derek Jeter and Jeb Bush reportedly teamed up to buy a Major League Baseball team. The Miami Marlins will never be the same.

In honor of Westbrook, we listen to “Do What I Want” one last time.

We’ll get to the Rockets in a moment, but first let’s poor one out for Russell Westbrook.

The guy put up one of the best statistical seasons in NBA history, carried his team all season long and consistently wowed us with his highlights and stat lines.

Westbrook went down swinging in an elimination game Tuesday, scoring 47 points on 15-of-34 shooting, while pulling down 11 rebounds and dishing nine assists. That’s the type of stat line that was basically unheard of until Westbrook made it almost mundane.

Russell Westbrook ends his season as the 3rd player in NBA history to average a triple-double in the playoffs. pic.twitter.com/LmLsPBG3Km

But alas, the Thunder lost Game 5 to the Rockets 105-99, meaning Houston moves on to the next round of the playoffs. This statistic says it all.

Thunder outscored the Rockets in the series by 4.9 points per 100 possessions w Westbrook on the floor. They were a -51.3 per 100 w him off.

Rockets MVP candidate James Harden didn’t have his best game Tuesday, scoring 34 points on only 8-of-25 shooting, but his teammates picked him up. Patrick Beverley had 15 points on 6-of-10 shooting, plus eight assists. Nene had 14 points on 5-of-8, along with seven boards.

Meanwhile, Eric Gordon struggled shooting the ball (1-of-8 from 3-point range, 8 points), but he did do this.

And so the Rockets move on the face the winner of the Spurs-Grizzlies series. Speaking of which…

Spurs top the Grizzlies, Jazz slide by the Clippers

While the Rockets clinched their berth in the next round, two other Western Conference teams took key steps toward the next round in pivotal Game 5s Tuesday.

San Antonio had seven players score at least 9 points, led by Kawhi Leonard with 28 and Patty Mills with 20.

Patty and @spurs feelin' it on @NBATV! #NBAPlayoffs pic.twitter.com/Pd5zV6rFN2

The Spurs will have an opportunity to close out the series Thursday in Memphis.

Meanwhile in Los Angeles, the Jazz grabbed a 3-2 series lead with an 96-92 road win over the Clippers. The game was close most of the way, with Utah taking a lead in the third quarter and holding off an L.A. rally down the stretch.

That includes Iso Joe Johnson, who scored 14 points, with 2 of them coming on this extremely clutch jumper:

The Blake Griffin-less Clippers got 28 points and nine assists from Chris Paul and 26 points from J.J. Redick, but it wasn’t enough, as the rest of the team combined for only 38. They now head back to Utah for Game 6, where they have to win to keep their season alive. Things aren’t looking great.

But hey, at least the Clippers won this mascot battle.

– In baseball news, the Miami Marlins will soon have a new ownership group, and you’ve probably heard of its front-men: Derek Jeter and Jeb Bush. Though the duo reportedly still needs to nail down some funding, it looks like they will be MLB owners.

– Put Nationals speedster Trea Turner in Coors Field and what happens? He hits for a cycle.

– Milwaukee Brewers slugger Eric Thames hit his 11th home run of the season Tuesday, then had a brilliant response when asked about baseless PED rumors.

Eric Thames was drug tested again tonight. "If people keep thinking I'm on stuff, I'll be here every day. I have a lot of blood and urine." pic.twitter.com/De1smFWVj7

– The Blue Jays’ Chris Coghlan submitted one of the coolest plays of the year.

"I told you I wasn't gonna slide." – Chris Coghlan. pic.twitter.com/DQIG1qAYm2

– Sports Illustrated’s Lee Jenkins wrote an excellent story on a high school baseball player who might be the best prospect we’ve seen in a while.

– Speaking of NBA generosity, Spurs coach Gregg Popovich apparently left a $5,000 tip on an $800 bill at a restaurant.

– After the Rockets-Thunder game was over, Westbrook and Beverley traded barbs at their respective press conferences. First, Beverley explained his side of the guards’ in-game trash talk…

Then Westbrook offered his perspective…

Russell Westbrook shoots back at Pat Beverley: "He was talking about he's first team All-Defense…maybe he was dreaming or some s–t" pic.twitter.com/4JwT6eJk0d

– Dion Waiters’ essay for The Players Tribune has an incredible headline.

– The NBA is holding its inaugural award show on June 26, and the league got quite the big name to host it.

– Jon Gruden called not drafting Aaron Rodgers, “one of the greatest regrets of my lifetime.” Yep, sounds about right.

– The USGA tried to do the right thing by eliminating viewer call-ins, but they may have made the whole thing more complicated.

– A month after getting out of prison, the Brazilian soccer player convicted of brutally murdering his ex-girlfriend is headed back behind bars.

Once more in honor of the fallen Russell Westbrook, who went down standing his ground, just like Bodie Broadus.