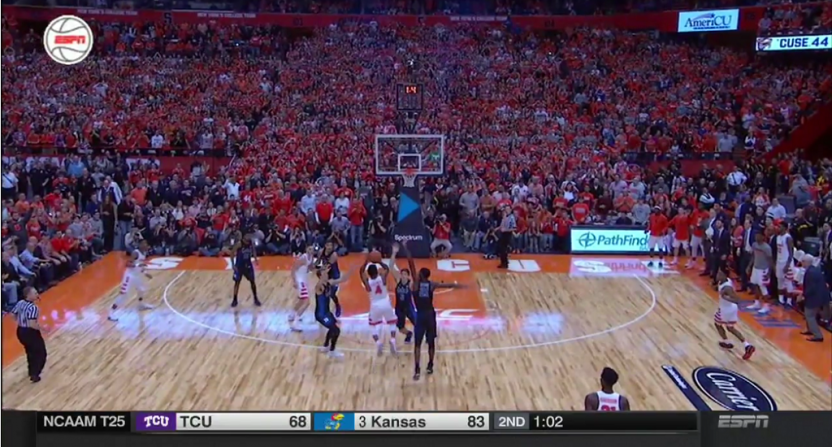 The ACC showed Wednesday why it’s the best conference in college basketball, with several exciting games that had major implications for the conference standings.

Meanwhile, the NBA trade deadline is upon us, and general managers are making their best offers. It’s time to take it or leave it.

Welcome to the Cheat Sheet.

Syracuse’s beats the buzzer against No. 10 Duke; No. 8 UNC beats No. 7 Louisville

Syracuse has had a super odd season. The Orange began 11-9 and looked to have no shot at an the NCAA Tournament bid. Then they ran off five straight wins, including wins over No. 6 Florida State and No. 9 Virginia and got back into the conversation. Then they lost three in a row and fell back off the bubble.

Then came Wednesday night, when Syracuse took on No. 10 Duke at the Carrier Dome. The Blue Devils led 33-25 at halftime, but the Orange stormed back and found themselves tied with only second to play.

Then senior John Gillon stepped up and did this:

Here’s another angle, plus some footage of Syracuse fans’ enthusiastic court-storming:

Gillon finished with 26 points on 9-of-14 shooting, delivering Syracuse a huge victory that keeps the Orange in the NCAA Tournament conversation.

Elsewhere in the ACC, which has clearly put to rest any debate about what is the best conference in America, No. 8 North Carolina beat No. 7 Louisville, 74-63. That game wasn’t quite as dramatic as the Syracuse-Duke contest, but did feature a heated confrontation between Rick Pitino and a Tar Heels fan.

Plus, Wednesday night’s game was crucially important to the ACC standings. Had the Cardinals won, they would have pulled into a first-place tie with the Tar Heels. Instead, North Carolina has a two-game lead over four teams.

Here’s how the top half of the conference stands right now:

There was no NBA trade Wednesday that even approached the magnitude of the DeMarcus Cousins deal we saw on Sunday, but several swaps were interesting nonetheless.

And, of course, there were loads of rumors Wednesday as well.

The deadline is Thursday, so we should see some more trades and a whole lot more rumors over the coming hours.

– Oregon’s Dillon Brooks hit another last-second 3-pointer to lead No. 6 Oregon over California.

– Jay Cutler is reportedly thinking about retiring from the NFL. That seems… drastic.

For those wondering how the Cavs are taking Kyrie's comments about Earth being flat, here's RJ's shirt during Road Trippin's live IG video: pic.twitter.com/JqngnY86Z8

– Wizards rookie Sheldon McClellan has legally changed his name to Sheldon Mac, which is pretty badass.

– The Cubs will apparently not reunite with Sammy Sosa anytime soon, which feels kind of sad.

– Speaking of 1990s star baseball players, Mike Piazza explained that he bought a soccer team in Italy and not, say, St. Louis because of the cured meats.

– Nationals shortstop Trea Turner was late to camp Wednesday because he was caught up in jury duty, thus proving that athletes are people too.

Justice has been served! Back to work! #GuiltyOrNotGuilty

– Twins pitcher Ryan O’Rourke says he barfs before every outing. Yes, you read that right.

– The National Baseball Hall of Fame will open an exhibit for the “Homer at the Bat” Simpsons episode and also hold an unofficial induction ceremony for Homer.

– Nick Saban spent some time with Mark Zuckerberg, whom the coach knows as “the Facebook guy.”

– Budapest dropped its bid for the 2024 Summer Olympics, improving the odds for Los Angeles.

– An ex-NFL player was fired as a high school head coach, allegedly due to a picture of his wife and him holding alcohol.