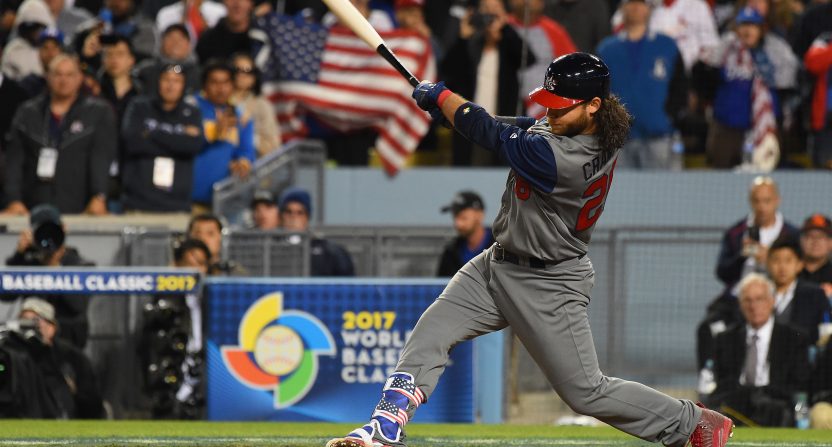 It’s been a slow week in the sports and pop culture world and Wednesday was no different. However, a couple of big stories did emerge such as the United States winning its first WBC, Martellus Bennet firing shots at the NFL, Brent Musberger coming clean, and the New York Knicks still aren’t abandoning the triangle. 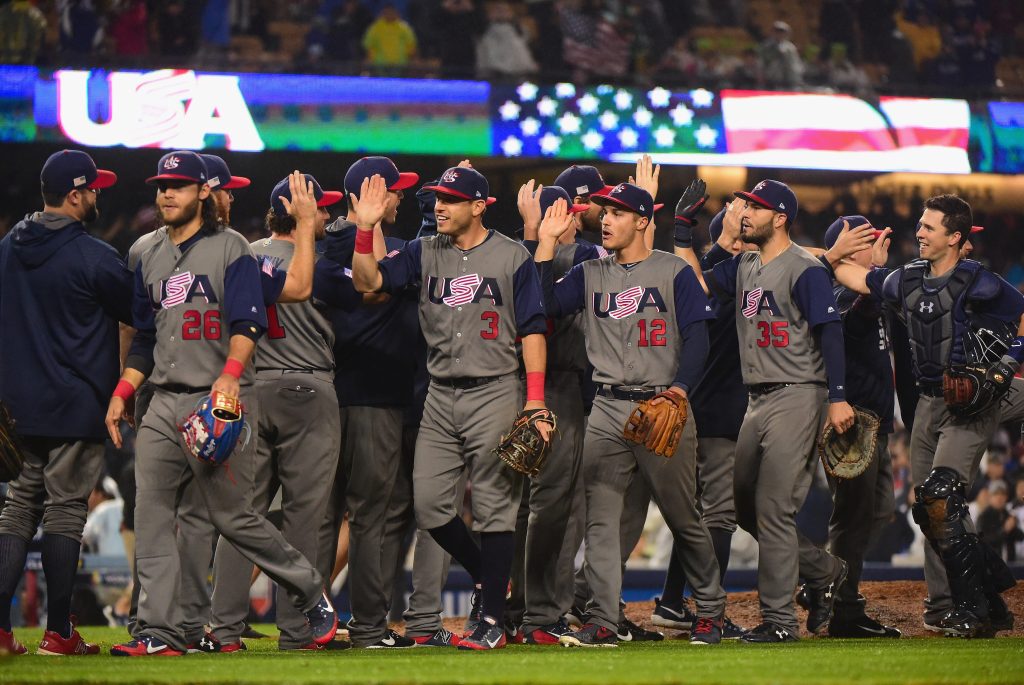 It took 11 years and four tournaments, but Team USA is the World Baseball Classic champion at last.

The United States won its first World Baseball Classic championship in the history of the tournament Wednesday night in Los Angeles, with a dominating 8-0 victory over Puerto Rico.

Marcus Stroman pitched six innings of no-hit baseball and Ian Kinsler whacked a two-run home run in the top of the third inning gave the United States a lead in the World Baseball Classic championship game Thursday. The Americans never looked back from there, cruising to a blowout win.

After the game, Stroman was named the WBC MVP due to his championship game performance. 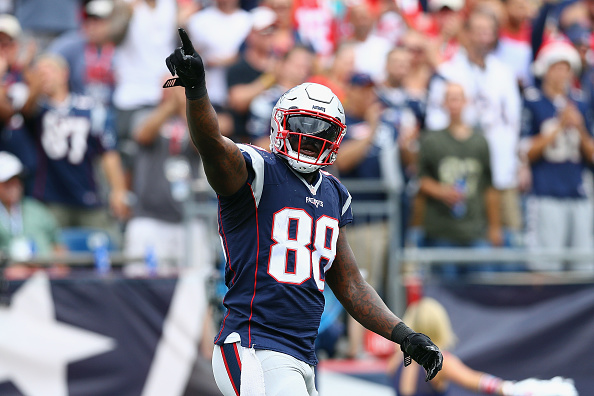 It all starts with a tweet, and on Tuesday night, NFL EVP Troy Vincent tweeted that the league would be developing an “educational training video” teaching players how to properly celebrate.

From there it just went down hill once Martellus Bennett caught wind of it.

The newly-signed Green Bay Packers tight end Bennett, one of the league’s most outspoken (and for that matter, thoughtful) players, spoke up in response to Vincent’s tweet and how inane the NFL’s thought process is.

Yea An educational training video on celebrations? Spend that money on something else like a video on investments or something that https://t.co/xabCzeRqYO

Do something impactful. Y'all wasting guys time with this shit. https://t.co/xabCzeRqYO

An educational video on appropriate celebrations. Not signing up for that class. pic.twitter.com/6oNMf5oZFM

Bennett kept going too for a while and you can read the rest of his rant and more right here.

Brent Musburger admits he once bet on a game he broadcasted 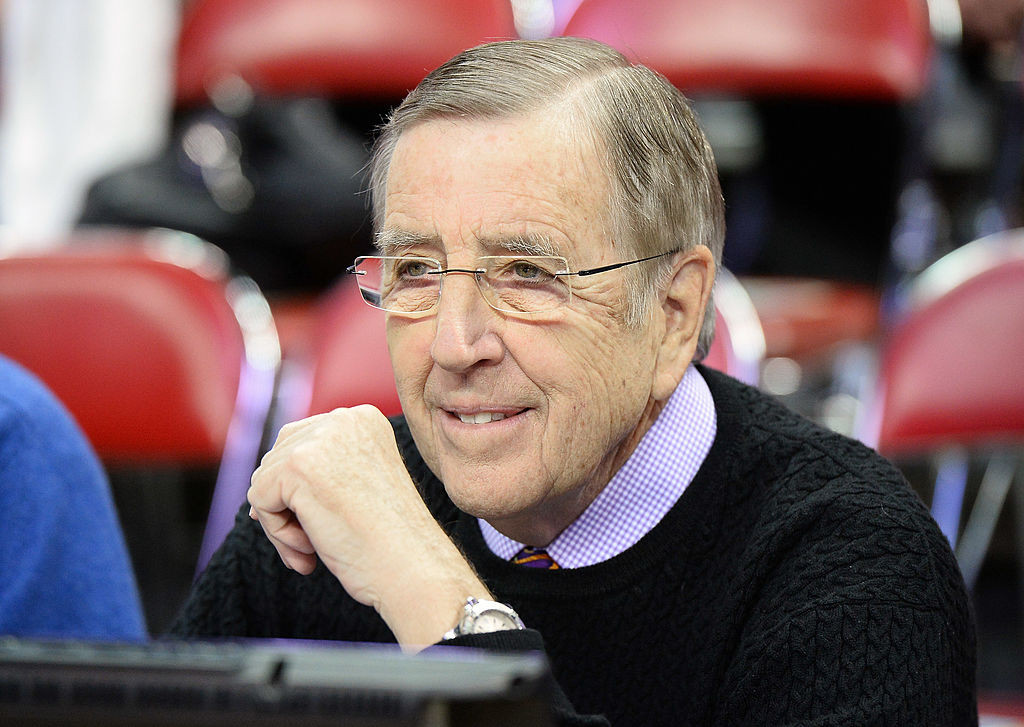 Now that he’s out of traditional broadcasting and working on a Vegas sports gambling show, former CBS and ESPN broadcaster Brent Musburger has finally come clean and admitted he once bet on a game he called.

Musburger gambled on a Lakers-Trail Blazers game back in the 1980s. He claims that although he’s bet on many other games throughout his life, that was the only time he gambled on a game he broadcasted as he quickly learned his lesson when the outcome came down to the final shot.

Here’s how Musburger told it to Teddy Greenstein of the Chicago Tribune:

One time. A long time ago I was doing an NBA game. It was in Portland in the ’80s. Lakers-Trail Blazers and the director was legendary Tony Verna, who started instant replay in the (1963) Army-Navy game. I took the Lakers (plus) three points. The bet was dinner for the production team, which I suppose would have been 300 bucks. The Blazers were up by 4, well inside of one minute. Shot clock. The Lakers came across (half court) and a kid by the name of Kurt Rambis jacked up this outrageous shot, and I was all over him! So I paid off the bet, bought the dinner and said to myself: ‘You know, that was not good. That was just not good. You do not want the spread to influence how you are announcing a game.’ I always knew what the number was on every game I did. I told (former ABC executive) Dennis Swanson: I’m not going to bet on games I broadcast. I’ll bet on other games.

After learning that lesson, let me apologize to Rambis. I should not have done that. ‘He could have pounded it inside and I could have had a backdoor cover!’ (laughs)

The New York Knicks will not abandon the triangle next season 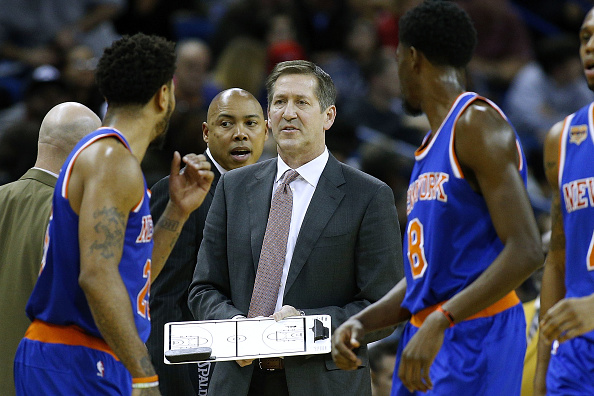 Not only will the New York Knicks not abandon the triangle next season, Jeff Hornacek said it’s all the Knicks will run.

Hornacek said rather than scrapping the triangle completely, the team will instead focus on it exclusively this offseason and going forward:

“Obviously, if we go into it like we did this year — no,” Hornacek told reporters in Utah when asked if the Rose-Anthony-Porzingis trio can be playoff caliber. “If we turn around and have a different way we start, go right at however we’re going to run it next year, if it’s full triangle, it’s possible. You never know how these things will fit. Maybe a second year is helpful for us.”

Hornacek also said he made a mistake in the beginning of this season by trying to blend the triangle with a more up-tempo style of basketball, and he reiterated that personnel decisions this summer will be based on the triangle.

“Do we have the right fit of guys running the system?” Hornacek said. “If we think that we can somehow — with a fresh start of training camp and go to it right off the bat, if that helps us and Phil [Jackson] and Steve [Mills] — we think maybe the same guys on this team could have a different outlook on it, then we’ll stay the same. If not, they’ll look at other guys.”

That’s all a little surprising because New York has been, well, bad. That’s not news, nor is it even new; the Knicks are in fact on their way to a fourth-straight losing season. 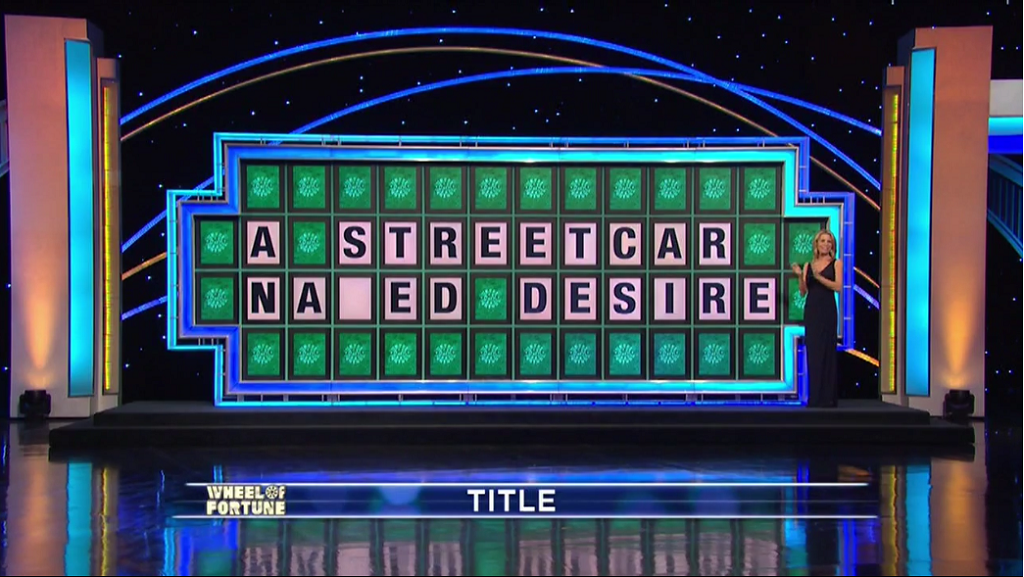 – There are bad Wheel of Fortune fails and then there was this all-timer.

– Before losing to the United States in the World Baseball Classic finals, the Puerto Rican started a major fashion trend in Puerto Rico of dying your hair blonde. Sadly for Puerto Ricans, the island started to run out of blonde hair dye.

– After withdrawing from WGC-Dell Match Play, golfer Jason Day revealed the tragic reason why was due to his mother’s battle with lung cancer.

We at The Comeback wish the Day family nothing but the best.

Here’s a full description of what’s painted on the skates courtesy of ESPN’s Uni Watch:

The left skate features Moscow’s famous Saint Basil’s Cathedral on one side and a stylized Russian flag on the other, while the right skate shows the United States Capitol in Washington, D.C., and an American flag.

The skates will be auctioned off with all proceeds benefiting the American Special Hockey Association, a group who assist those with physical and developmental disabilities who want to play hockey.

– Joel Embiid is a ton of fun to watch play basketball, but sadly he also seems to be always dealing with an injury. Now things seem to be getting worse for the big man.

ESPN’s Marc Stein reports Embiid is “very likely” to have surgery on his left knee. The Philadelphia 76ers big man suffered a partially torn meniscus and suffered a bone bruise back in January. He’s sat out of live action ever since. Stein adds there’s no timetable on the surgery or when Embiid will make his return to the court, but the prognosis isn’t great.

– Our own Sam Blazer, much like myself, was an avid watcher of The Bachelor this season (#noshame). Well, Nick Viall is now on Dancing With the Stars and that’s led to a little feud between Viall and William Shatner for some reason.

Shatner is known for his role as Captain Kirk on Star Trek, but more recently, he has been known for his unwavering Dancing with the Stars fandom. Being a major-ish celebrity, he has some weight behind his name and he uses it on Twitter to influence the show’s voting.

My goal for #DWTS is to knock Bachelor Nick out ASAP. Who is with me? ???

Well, Mr. Blazer is not a fan of Mr. Shatner’s tweet at all.

– People are freaking out over the first full trailer for the upcoming season of Fargo.

It’s a tragedy, ya know. Watch the TRAILER for #Fargo’s all new story. Premieres April 19 on @FXNetworks. pic.twitter.com/QkKdnhDoFA

– Roger Goodell made a big announcement Wednesday that the NFL would cut down on commercials during games in certain scenarios like when a TV Network takes a break, shows the kickoff, and then immediately takes another break.

“It drives me crazy,” Goodell told USA TODAY Sports on Wednesday. “We call those ‘double-ups.’ They actually occurred 27% of the time (on kickoffs last season). And that’s still too high for us.”