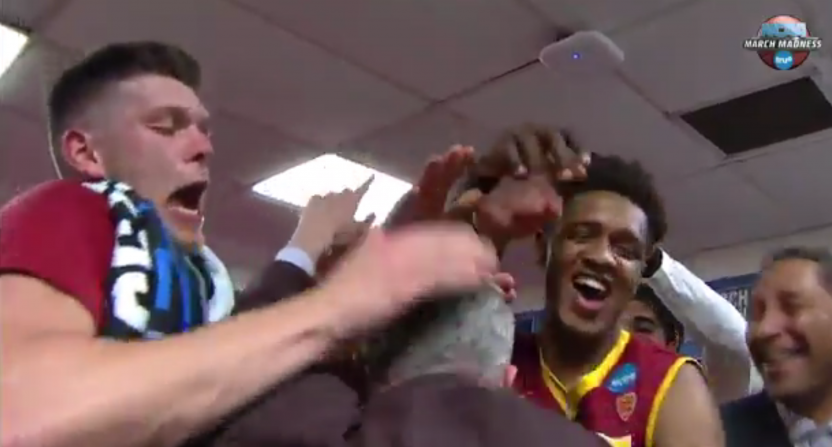 It’s Thursday, which means it’s one of the most exciting occasions on the sports calendar: the first full day of the NCAA Tournament.

But before we get to that, we’ve got to get you caught up on what happened Wednesday, including a thrilling play-in game between Providence and USC, a triumphant win for the United States in the World Baseball Classic and a couple big performance from NBA MVP contenders.

USC comes back against Providence, reaches NCAA Tournament Round of 64

March Madness is off to an awfully fun start.

At halftime, Providence led USC 44-29 and appeared primed to escape the play-in game and advance to what we all consider the real NCAA Tournament.

But after a Providence jumper to start the second half extended the Friars’ lead to 17, USC launched a prolonged 32-14 run to take the lead with just under seven minutes to play. The Trojans kept scoring, Providence never quite recovered, and USC wound up advancing with a 75-71 victory.

Now, the No. 11 seed Trojans will face No. 6 seed SMU, a legitimately scary team that many people have pegged for a deep tournament run.

In other play-in game news, UC Davis beat North Carolina Central 67-63 for the right to be demolished by Kansas on Friday.

Put the finishing touches on your brackets, folks, because March Madness is here.

Speaking of dramatic comebacks, the United States used one of those Thursday to beat Venezuela 4-2 in San Diego in the World Baseball Classic.

After Felix Hernandez shut down the U.S. for five frames, the stars and stripes trailed 2-0 at the seventh-inning stretch. A Jonathan Lucroy sacrifice fly made the score 2-1 entering the eighth, which was when things really got fun.

The U.S.’ first hero was Adam Jones, who had started the team’s tournament run with a walk-off last week against Colombia. Facing formidable reliever Hector Rondon, Jones launched a deep fly ball to left-center field. The ball carried over the Petco Park fence, tying the game.

Three batters later, with one out and a runner on first base, it was Eric Hosmer’s turn to deposit a fastball over the wall.

Just like that, the United States had gone from trailing to leading. Luke Gregerson came in to close the game and got Victor Martinez to ground into a sharp double play to wrap up the American win.

With the victory, the U.S. is now 1-0 in their pool, with games still to play against Puerto Rico and the Dominican Republic. Wins in both of those contests would seal a spot in the tournament semifinals, while a victory in just one of them would still leave the Americans in strong position to advance.

– The NBA MVP race brings us new drama every night, and on Wednesday it was Kawhi Leonard putting up a big stat line: 34 points, nine rebounds, six assists. Despite that performance, the Spurs lost to the Trail Blazers, 110-106.

According to ESPN, Leonard joins David Robinson and George Gervin as the only San Antonio players to score 30 points in a game 25 times in a season.

He also did this:

"OH MAN! Someone dropped him out of the roof!" #SCtop10 pic.twitter.com/h1enOoe1mS

– Meanwhile, James Harden put up yet another triple double (18 points, 12 rebounds, 13 assists), though he also committed nine turnovers. The Rockets routed the Lakers 139-100.

– We wrote earlier this week about how Vince Carter was still balling out at age 40. On Wednesday, he showed off his quadragenarian hops:

– LaVar Ball continues to dominate the news. Charles Barkley wants to play the boisterous father of Lonzo Ball one-on-one, while LaVar actually did face ESPN’s Marcellus Wiley. Here’s a list of people who would beat LaVar in a pickup game.

In the spirit of good sportsmanship & good citizenship, here are @barackobama's picks for #MarchMadness 2017: https://t.co/wRuCz6LBvc pic.twitter.com/UrZkpbkZHi

– A judge dropped the assault and burglary charges against Darrelle Revis.

– Someone sent Dirk Nowitzki an odd piece of fan mail: a potato with his photo on it.

Whoever sent me this POTATO!!!! Much appreciated…. pic.twitter.com/fVaqRvvgTn

– Clint Dempsey is back on the U.S. men’s soccer team roster for World Cup qualifiers, but coach Bruce Arena mostly played it safe with his choices for the squad.

– The Seattle Mariners are the champions of digital marketing.

Bat flips are so last season.

It's time for something new. pic.twitter.com/NLbhCiNlYh

– NASCAR won’t punish anyone for last weekend’s Joey Logano-Kyle Busch fight. It’s almost like the sport wants to encourage beef between racers to drum up attention…

– You probably had a better day Wednesday than these people.

I could watch this video of Amtrak commuters getting pummeled by flying snow all day long pic.twitter.com/AdG6QZMtLn

This should get you ready for this afternoon.