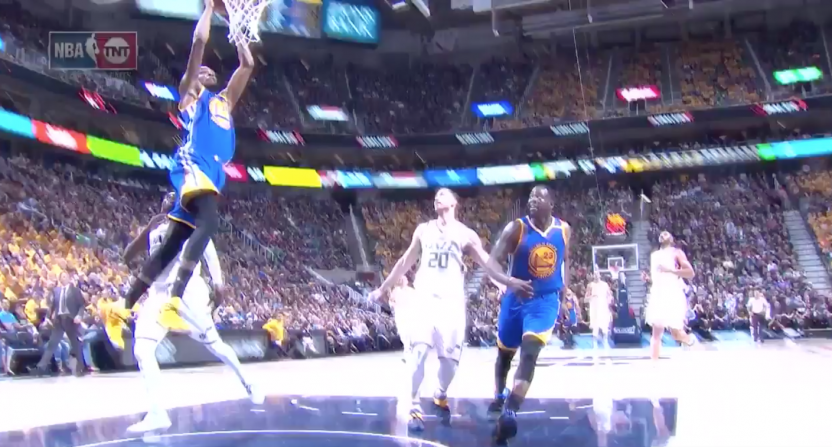 Two teams, one in the NHL and one in the NBA, entered Monday night with a chance to clinch a series victory and move on to the next round of their respective series.

One succeeded easily. The other failed emphatically.

We’ve got all that and more here in The Cheat Sheet.

Warriors glide by Jazz, move on to the conference finals

Well that was easy.

For the fourth straight game, Golden State beat Utah while hardly breaking a sweat. After a 12-point win in Game 1, and 11-point wins in Game 2 and 3, the Warriors prevailed by 26 Monday, 121-95.

Warriors sweep the Jazz to advance to the Western Conference Finals! #StrengthInNumbers pic.twitter.com/d7v6yfgpuV

Steph Curry led all scorers with 30 points, but Draymond Green was the Warriors’ best player. He notched a triple double with 17 points, 10 rebounds and 11 assists and added two steals for good measure.

The Warriors will now face the Rockets or Spurs while the Jazz head home. For Utah, Monday was a disappointing but predictable end to a pretty impressive season. Not that the night was a total loss. At least this happened:

Just a few days ago, the hockey world was writing off the Capitals, preparing a post mortem on another early exit for Alex Ovechkin and company.

But after a 5-2 blowout win in Game 6 of their series against the Penguins, the Caps are very much alive heading for a Game 7 back in D.C.

Monday’s game was even more of a blowout than the lopsided final score indicates. After leading 2-0 after two periods, the Capitals scored three goals in the first 12 and a half minutes of the third, including Andre Burakovsky’s second of the night, to go up 5-0. The Penguins scored two garbage-time goals after the game was firmly decided.

This goal: All @andreburakovsky.
This game (so far): All @Capitals. #StanleyCup pic.twitter.com/5AWRCXCoGT

The Caps and Pens will play Wednesday in a Game 7 with particularly high stakes. Pittsburgh will look to stave off an embarrassing collapse after leading this series 3-1. And Washington will look to exorcise some demons and finally get past a longtime rival.

Any NHL Game 7 is worth getting excited about. This one even more so.

– Lorenzo Cain turned a ground ball up the middle into a Little-League-style home run, thanks of course to some poor fielding.

That time Lorenzo Cain homered on a ground ball to CF… pic.twitter.com/0zlY8wdc0i

– The Matt Harvey saga continued Monday with the revelation that when Harvey didn’t show up to the ballpark last week, the team sent security to check on him.

– In more serious baseball news, Pirates pitcher Jameson Taillon had surgery Monday to treat testicular cancer. We wish him from the best, but based on his badass statement on the situation, it sounds like he’ll be fine.

– Draymond Green elaborately trashed Kelly Olynyk for playing dirty. The irony was lost on no one except Draymond.

– Rockets back-up center Nene is out for the rest of the playoffs, which could make a bigger difference than you think.

– Do the NBA playoffs have a competitiveness problem?

– Members of the 2008 Celtics reunited on Kevin Garnett’s TNT show, and it turns out they’re still absurdly bitter over Ray Allen leaving them five years ago.

“It was more than basketball for us… It felt like a sour breakup.”

– Former NFL receiver Plaxico Buress says if he could do it over, “I wouldn’t have shot myself in the damn leg. He offered that, plus some other useful advice,” in a Players Tribune essay.

– College football is getting an early signing period, around the holidays in December. There are pros and cons for everyone involved.

– A Lionel Messi look-alike is causing chaos in Iran. Police had to bring him to the station while they cleared away adoring fans.

– An elementary school in Texas is seeking public suggestions for a new name. Some of the proposals: Dwayne Johnson Elementary, John Cena Elementary and O.J. Simpson Elementary.

Believe it or not, Lonzo Ball, aka ZO2, can really rap.