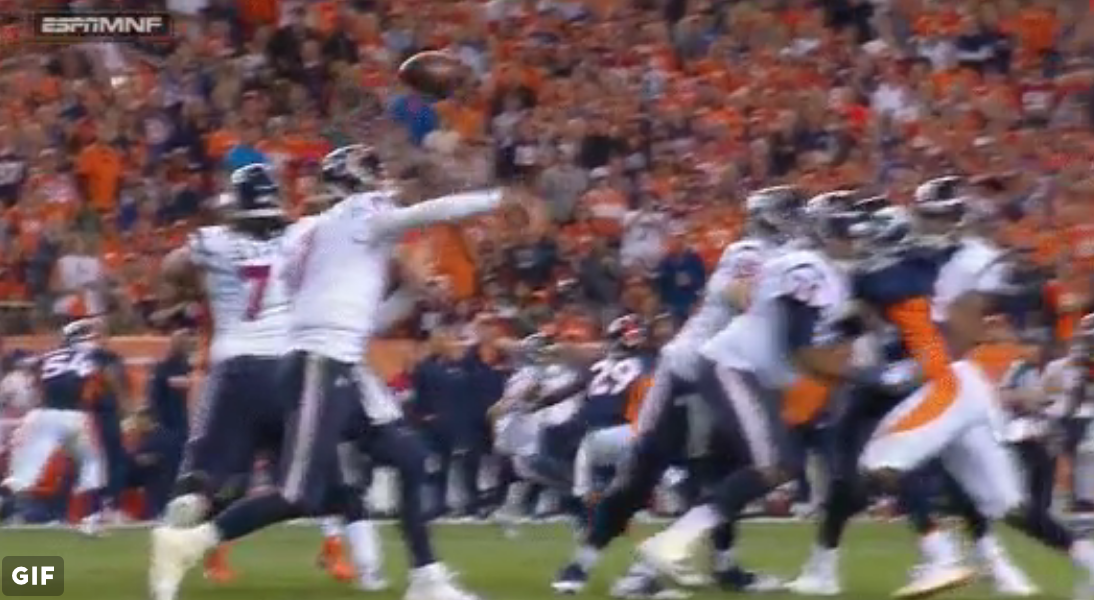 For a long time I used that song as my alarm clock, and it kind of shocked me that more people didn’t do that. It’s the perfect alarm clock song. It starts softly and crescendos into that first “good morning,” then hits you with a soothing little harmony. The first verse doesn’t come in until you’re fully awake. I’m pretty sure Kanye made this song intending for people to use it as their alarm clocks, and he’s probably pissed more people don’t. Cool music video, too.

Brock Osweiler shows why the Broncos let him go

The Broncos played the Texans on Monday Night Football, in what you might call The Brock Osweiler Bowl. Denver won the game, 27-9 and also won by virtue of not having Osweiler on their roster.

The former Broncos quarterback continued his awful debut season in Houston, completing 22 of 41 passes for only 132 yards, while fumbling three times. He was very, very bad.

Brock Osweiler has 107 yards on 34 passes. Since 2001, there have been 5 games where a QB had fewer pass yds on at least this many attempts

Brock Osweiler is statistically the worst quarterback in football…. and that doesn’t begin to do it justice.

Osweiler now ranks 24th in the NFL in passing yards, 29th in completion percentage, 30th in yards per attempt and 30th in quarterback rating.

Meanwhile former Northwestern passable quarterback Trevor Siemian was unspectacular in his seventh start for the Broncos but was certainly better than Osweiler, completing 14 of 25 passes for 157 yards a touchdown without turning the ball over. Every day, Denver looks wiser for letting Osweiler walk. Siemian has better numbers and has led his team to a better record. And then there’s this:

Brock Osweiler returns to Denver. He’ll go up against Trevor Siemian where the salaries are different to say the least. pic.twitter.com/HfVlNr1IZs

Yeah, Osweiler is getting $37 million in guaranteed money over this year and next, so we’re not going to feel too bad for him.

Dolphins’ running back Arian Foster retired Monday after seven and a half seasons in the NFL. Foster was a great player, an unlikely success story, an astute critic of the NCAA and a semi-flamboyant atheist. But what I’ll remember him for most is his hilarious skepticism of cat owners.

Grantland (R.I.P.) had the full rundown of Foster’s joust with cat folks, but here are some sample tweets:

Cat owners are intriguing to me, cuz the cat really doesn't like you. He's just appreciative of the food. In my observation anyway.

Your cat doesn't love you. Sorry.

Starting to respect the ambition of cat owners to prove to me their cats love them. I dig that.

Check my mentions if you like pictures of cats getting forced to take pictures by their owners to show their adorability.

Hopefully retirement brings Foster more time to tweet, because the world needs more gems like this one:

Yea, minus the libert. RT @Junior2Trill_: @ArianFoster aren't you a Libertarian?

– The Cubs’ Kyle Schwarber will likely DH Game 1 of the World Series after being out since April. He hasn’t faced Major-League pitching in months and can barely run. What could go wrong?

– The Indians’ Jason Kipnis is a lifelong Cubs fan now tasked with extending Chicago’s curse. Turns out he went to the same high school as Steve Bartman and hopes the poor guy will come out of hiding to throw out a first pitch. Kipnis’ life is so good right now that he even gets free Chipotle in Cleveland.

Jason Kipnis was asked about #Indians celebrity status in Cleveland. Said he went to Chipotle the other day and they wouldn’t let him pay.

"I went to Chipotle, and the guys were like, 'No, you're not paying.'"–Jason Kipnis

– Giants cornerback Eli Apple is cool with his mother being a badass.

– Geno Smith has a torn ACL. Beats getting punched in the jaw, I guess.

– Russell Wilson thinks overtime games should be decided by a field goal contest. He didn’t seem to be kidding.

– A New York Times television critic watched two episodes of Goliath out of order, then complained that the show’s plot structure was funny.

– Channeling his inner Antonio Brown, an MLS player got a yellow card for twerking.

#ICYMI The most bizarre booking ever for former Middlesbrough striker Kei Kamara – booked for twerking…pic.twitter.com/YMqeZJIolF

One Last Moment of Procrastination

In honor of Arian Foster’s feelings toward cats…