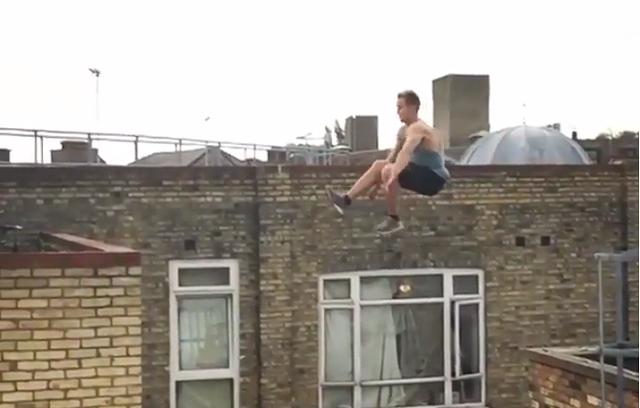 Giancarlo Stanton put on an incredible show at Petco Park, one of the best NBA big men of all-time is calling it a career, a cloud looks like a penis, and a guy makes an insane building-to-building jump. Let’s get to it here at Tuesday’s Cheat Sheet. Giddy up…

MLB made a great call in letting Giancarlo Stanton participate in the Home Run Derby despite not being on the All-Star team, and he showed why with an absurd 61-homer performance last night at Petco Park. That’s a record for the Home Run Derby, but keep in mind this new format of a five-minute clock for each round (plus 30 bonus seconds if two homers of 440+ feet are hit) instead of the 10 “outs” per each round. Either way, what Stanton did was insane to watch.

His first round, for example, included 24 homers:

@Giancarlo818 smashes it 497ft on his way to winning the #HomeRunDerby ⚾️🏆 pic.twitter.com/JQwYEOiOcL

I mean, look at the Statcast readings of these dingers:

Tim Duncan is hanging ’em up after an unbelievable 19-year NBA career, all with the San Antonio Spurs.

Our Alex Putterman put it well:

Thus ends a truly remarkable career. After being selected first overall in the 1997 NBA Draft, Duncan won five NBA titles, three Finals MVPs and two MVPs. He reached 15 All-Star games and was named first-team all-NBA 10 times. He scored more points than all but 13 other NBA players and pulled down more rebounds than all but five. Put it all together and Duncan was undeniably a top-12 player of all-time. And somehow Duncan accomplished all the above with the most unassuming persona of any superstar in American history.

Cheers to retirement and thanks for the awesome basketball for damn near 20 years, Tim Duncan.

– Max Kellerman will join Stephen A. Smith on First Take, replacing Skip Bayless (now of course with FS1). I’d certainly watch Kellerman over Bayless, but with Stephen A. around this show will still be unwatchable to most of us.

– Warriors star forward Draymond Green was reportedly arrested for assault over the weekend.

– Chris Berman dropped an awkward Muhammad Ali reference at the end of the Home Run Derby.

– The celebrity softball game ending was awesome. Also in that game…

Oh, and Nina Agdal didn’t know you had to touch first base when running the bases.

– Jordan Spieth will not play in the Olympics.

– Our Joe Lucia has his MLB midseason awards.

– You have to see this dunk from the Drew League.

– Hackers have some fun with South Jersey road sign.

– Today is Amazon Prime Day! Massive sales going on, if you’re a Prime member, of course. The Verge takes a look at some of the best deals.