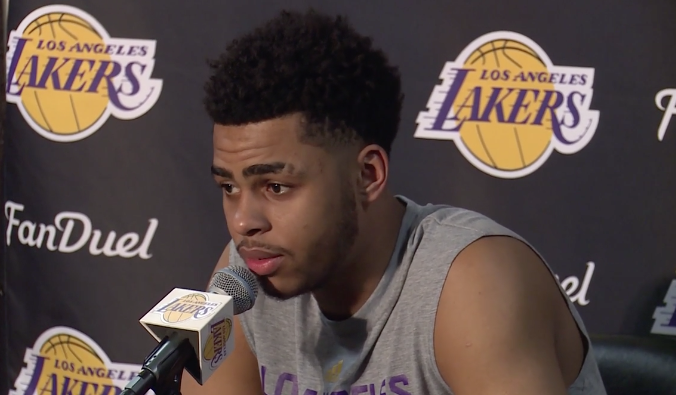 The Lakers have an absolute mess on their hands, the Warriors got their 68th win but it was most definitely not easy, and a guy had so much right about his NCAA Tournament bracket… but forgot one VERY important thing. We get to all that and much more, here at the Thursday Cheat Sheet…

Things are awkward in L.A. after D’Angelo Russell took a video of Nick Young admitting to cheating on fiancee Iggy Azalea

This whole topic is so high school-ish and I don’t want to add too much to it myself, but, we need to cover it. Let’s just go through the basics and get you caught up on everything, as it’s become a really big story and has made the Lakers an even bigger mess than they were three days ago, when they lost by 48 points to the Jazz (And when I incorrectly said they had hit rock bottom. I underestimated the organization’s ability to sink even lower).

So, a video surfaced of Lakers rookie point guard D’Angelo Russell taking a video of Nick Young admitting that he has cheated on his fiancee (and Australian rapper) Iggy Azalea. Young (obviously) didn’t know he was being recorded during this conversation. Everyone looks bad here, with Young cheating on his fiancee, and Russell secretly taking a video of a private conversation (an extremely immature thing to do in any case, and it’s especially not a good thing when talking the professional sports locker room life… and especially when you’re a rookie that should be trying to make a good impression on the veterans).

The team has been reportedly shunning Russell in recent days, where they’re ignoring him in the locker room, during meals, etc.

On Wednesday, Russell told Adrian Wojnarowski of The Vertical that he feels “sick” and is “sorry” about recording the video.

The Lakers held a press conference for Russell before Wednesday’s game, and he apologized.

Young quickly deleted this tweet that appears could be in response to a suggestion that he accepted Russell’s apology:

And then Russell heard plenty of boos in Wednesday’s pregame intros at Staples Center (and heard more boos every time he touched the ball):

How about Kobe? Well, he apparently gave Russell some Yoda-esque advice:

Kobe said he talked to D’Angelo Russell earlier in the day. “All I can do is my best Yoda impersonation… One day pass this shall.”

The Warriors needed overtime in Utah to get to 68-7

It looked like the Utah Jazz may put a serious dent in the Warriors’ 73-9 hopes, when Gordon Hayward hit this three to put the Jazz up 88-85 with 1:26 left:

But — as they pretty much always do — the Warriors had an answer, as Klay Thompson drained this three to tie the game 89-89 with 15 seconds left:

In overtime, it was all Warriors, and Draymond Green put the exclamation point on things with this dunk: 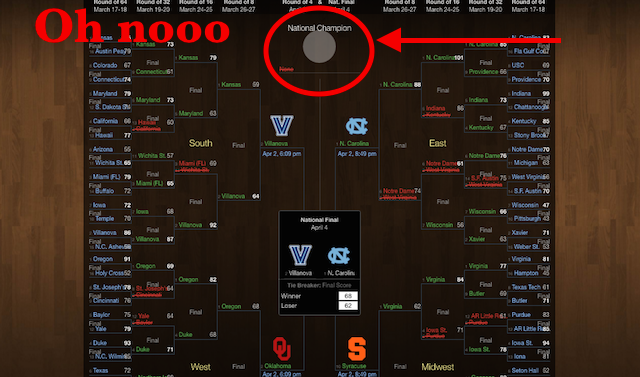 – The Conor McGregor-Nate Diaz rematch is scheduled for UFC 200 on July 9 in Las Vegas.

– The Spurs are a thing, too! They set an NBA record with a 38-0 start to the season at home (and with just three more home games to go).

– Manny Machado drew a line in the dirt to show where he thought a pitch was, after the home plate umpire ruled it strike three. So, yep, Machado was immediately tossed.

– A man perfectly picked the Final Four! One problem: He forgot to pick the national champion. YIKES.

– Inside the life of an NBA player on a 10-day contract, and why it’s harder than you think. This is a fantastic read.

– iPads are (finally) coming to MLB dugouts and bullpens.

– This is pretty awesome (and especially of the girl to say yes): A 76ers fan asked his date to #TrustTheProcess with him at the prom.

– Speaking of Philadelphia sports: A Phillies fan wore a dog like a baby.

– This is a big one for Instagrammers: Instagram increases video length from 15 to 60 seconds.

– One hell of a paragraph (from this story):

– The most important debate of the last year: Is a hot dog a sandwich? This poll says no.

– The original Gameboy commercial from 1989 is magical.

“Head popping”, apparently it’s called. Whatever it is, I don’t know how it’s possible. Via Reddit: