Three of the top four teams in college basketball lost, and any night Bill Raftery yells, “Onions!” is a good night in my book. Also, DeAndre Jordan is still a laughable free throw shooter and Ted Cruz actually did something that wasn’t despicable! All that and more in Wednesday’s Cheat Sheet. 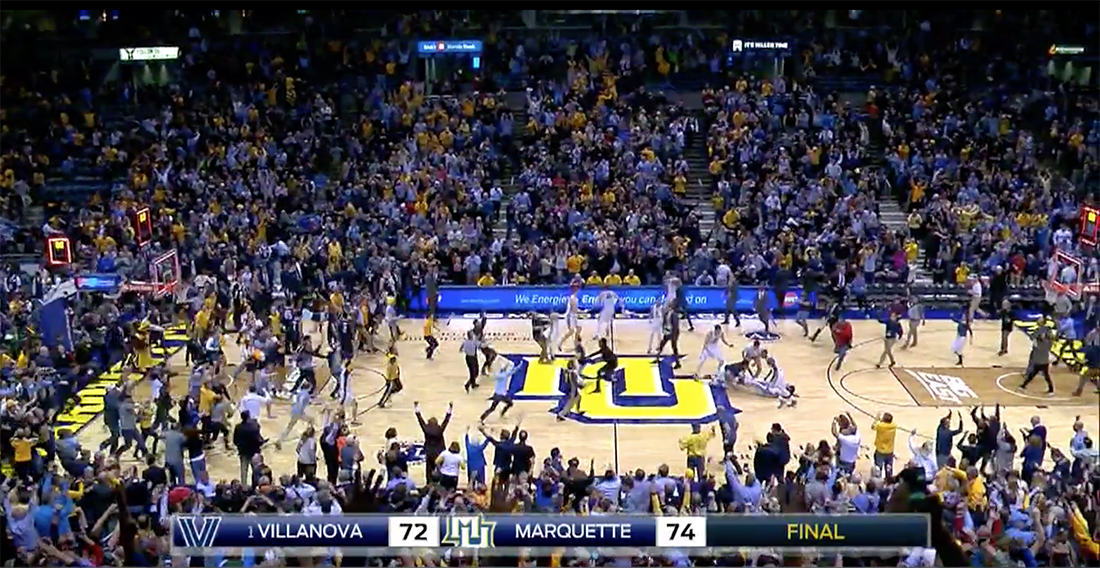 So, how did we get to the bedlam seen above?

Unranked Marquette trailed 68-55 with 5:15 remaining — stats guru Kenpom gave Villanova about a 99% win probability at this point — but finished the game on a 19-4 run. Katin Reinhardt scored the game-winning points on two free throws with 11 seconds, but prior to that he earned some Onions! from Bill Raftery with a 3-pointer one minute earlier that tied the game 70-70.

After Reinhardt’s go-ahead free throws, Jalen Brunson got a good look in the lane to tie but missed. Villanova even got a tip to catch the rim, but that did not drop either.

But not really. Kansas is still going to win the Big 12 title, because that’s just how things go. But West Virginia is looking like a legitimate contender for March with wins over Baylor, Virginia and the Jayhawks.

Although the Mountaineers got the big win, Kansas freshman star Josh Jackson had the biggest highlight of the game.

No. 4 Kentucky also lost Tuesday at Tennessee. As long as third-ranked Gonzaga beats San Diego and Portland this week, the Bulldogs should jump up to No. 1.

Not to be outdone by Joakim Noah, DeAndre Jordan reminded the world he still sucks at shooting free throws 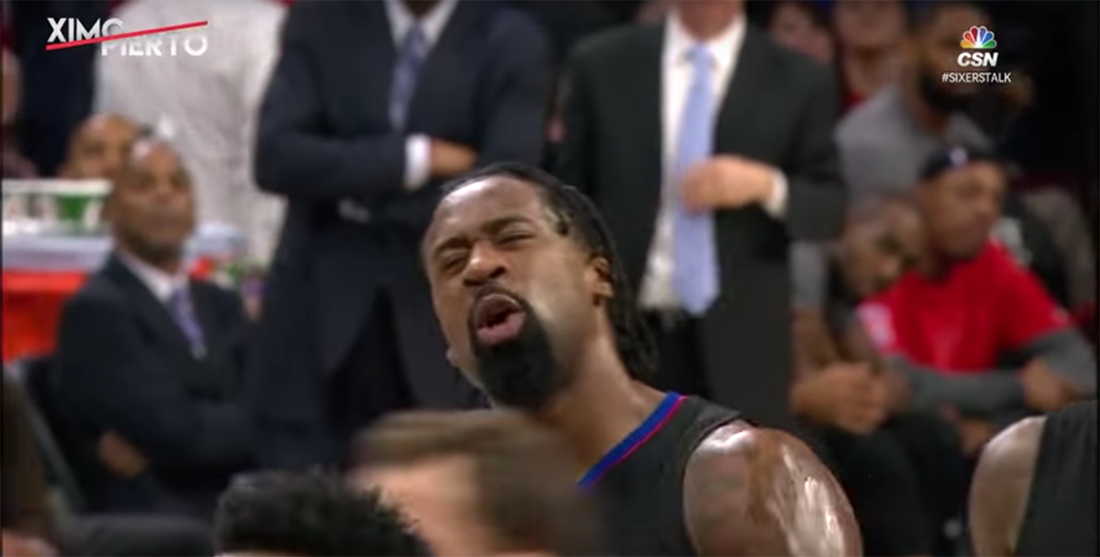 Even though DeAndre Jordan is shooting his best free throw percentage in five years, his legacy will forever be his inability to make foul shots.

So what did Jordan do after Joakim Noah airballed a free throw on Monday? He took the court on Tuesday and did the same thing. Twice.

Now let’s see what Andre Drummond can bring to the table.

Nintendo’s Punch-Out!! has its own theory on how a Mayweather-McGregor fight would turn out 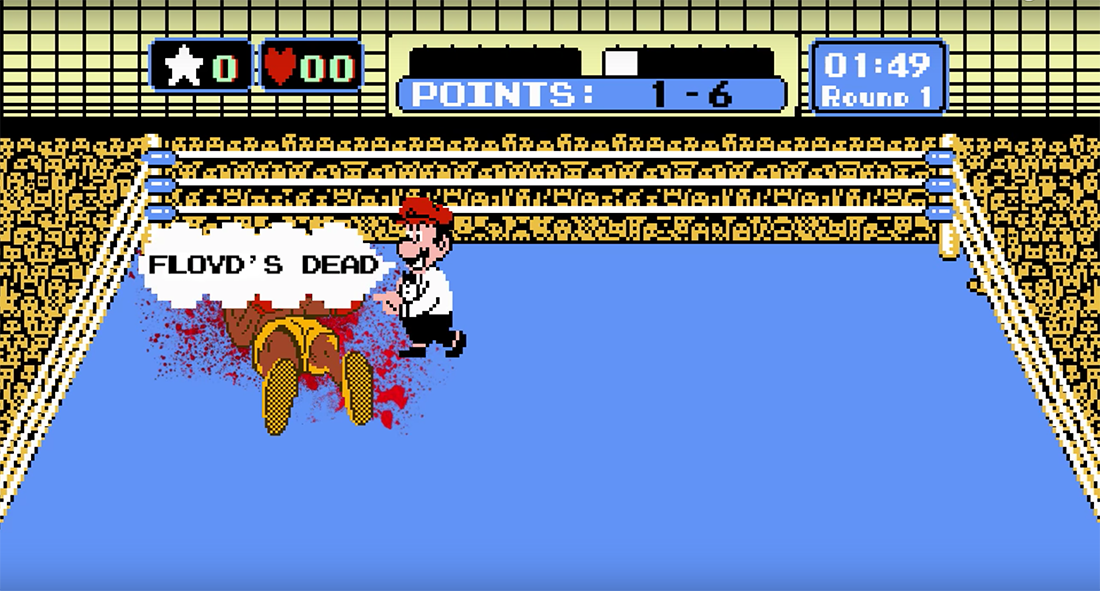 In a simulation of “Mike Tyson’s Punch-Out” by artist Adam Arnali, things don’t end so well for Floyd Mayweather in his fight against Conor McGregor.

There has been a lot of back and forth about the potential for this boxing match to actually happen. Speculation started in 2016, and McGregor said he would fight Mayweather for $100 million. He also got his boxing license in California.

After Mayweather offered McGregor $15 million for a fight two weeks ago, UFC president responded with an offer for $25 million for each fighter.

We’ll see if Mayweather backs off after seeing how this video plays out.

It was most likely a staffer and not Ted Cruz himself, but it came from the politician’s Twitter account so we’ll give him credit. When Deadspin asked for a picture of Cruz playing basketball, the former presidential candidate responded with a picture of Grayson Allen.

@Deadspin what do I win? pic.twitter.com/9XuRmmIkJS

He was told to eat shit and responded again with an Anchorman reference.

—Gregg Popovich has a little crush on the Golden State Warriors.

—Following suit of the College Football Playoff selection committee, the NCAA Tournament committee will unveil its top 16 teams on Feb. 11. Even if this is just a money grab, it should help build excitement for March.

—Overshadowed by the night’s big upsets, Purdue’s Caleb Swanigan and Michigan State’s Miles Bridges went balls out as the Boilermakers knocked off the Spartans. Swanigan had 25 points and 17 rebounds while Bridges posted a career-high 33 points and two dirty dunks.

Think you can jump?

We give you the @MilesBridges01 @MSU_Basketball dunk that’s, likely, taking up your timeline. https://t.co/WPuSBnJkKC

@MilesBridges01 you my friend a very fun to watch @MSU_Basketball

—Speaking of Swanigan, ESPN’s Myron Medcalf had a terrific feature on the Purdue star, who struggled with obesity at a young age.

—As bad as Kellyanne Conway is at telling the truth, she’s even worse at stand-up comedy.

—These Korean League basketball players did the Mannequin Challenge in the middle of their All-Star Game. I didn’t know it was possible for anything to be taken less seriously than the NBA All-Star Game.

Shout out to former Green Bay guard Keifer Sykes (No. 28 in white) on his All-Star Game appearance. The little fella’s got all the hops in the world.

—On the topic of all-star games that no one cares about, the Pro Bowl sent out 123 invites for 88 spots. What the hell are we even doing here? 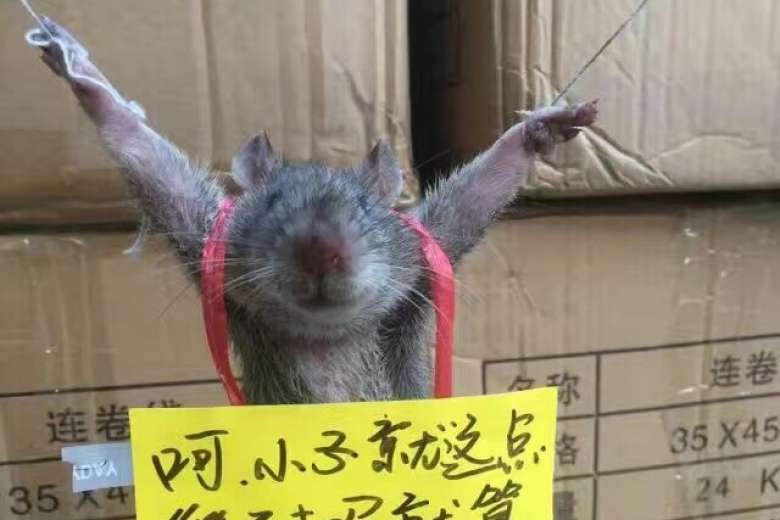 —The Celtics will become the third NBA team to have ads on their uniforms. The franchise reached a deal with General Electric, which is moving its headquarters to Boston.

Here's video of the Austin Laughlin shot from tonight passed along via @julius_starkey: pic.twitter.com/p4anjZMcRT

Watch these cows investigate a mysterious alien species known as the turtle.