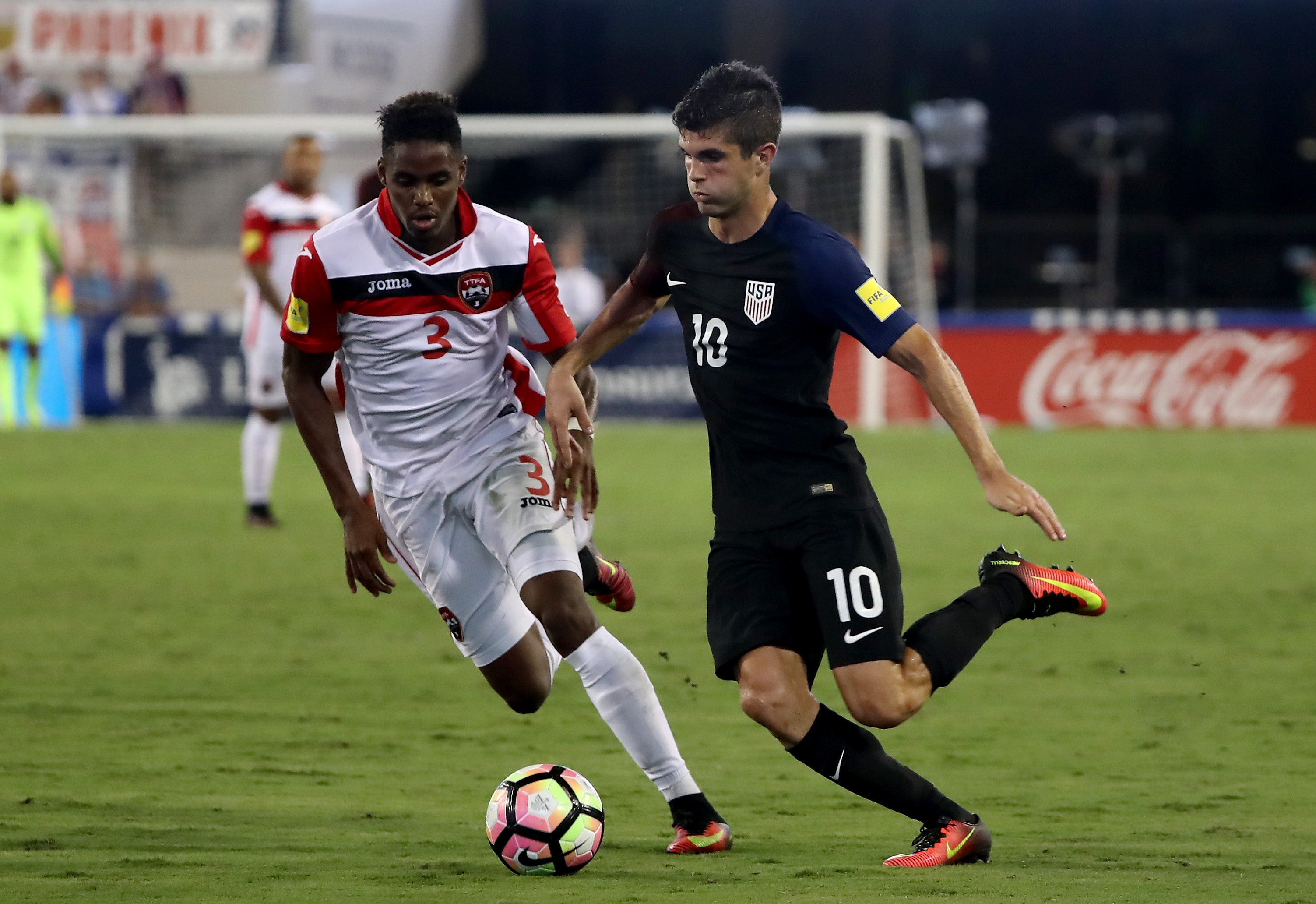 This is the last week before the NFL calendar hijacks the sports schedule.

If you think I’m overstating, just know that it affects everything from the baseball playoffs to the Presidential debate schedule (or, at least, the conversation about the debate schedule.)

Anyway, I mention this because if you’re any kind of a sports enthusiast, it’s going to dominate things going forward for the foreseeable future, so enjoy your last few days of freedom.

USMNT knocks off both Trinidad and Tobago, Pulisic impresses

As Leander wrote on this very site just last week, we have very good reason to be excited about Christian Pulisic. The 17-year-old Dortmund midfielder earned his first ever start for the USMNT last night, and he looked like the best player on the field. All aboard the excitement train.

In a commanding 4-0 victory that clinched advancement to the final round of World Cup Qualifying (known as the “hexagonal”, as it features six teams playing a home-and-home round robin), Pulisic tallied an assist and probably should have had a goal when he fired a near-post shot that somehow bounced off of both posts:

Seriously, how does that not go in?

Here’s his assist, which came off a sweet little passing sequence with the reclaimed Sacha Kljestan:

Altidore made it 16 career World Cup qualifying goals after an assist from Pulisic. #USAvTRI https://t.co/o9cXaEX232

He has a preternatural feel for the game, and if you were to randomly tune in and not know anything, you’d be hard-pressed to identify anything about him that would reveal his age. He plays strong despite his size, he’s one of the fastest players in the pool, his touch is impeccable, he finds a balance between facilitating and taking his own chances, he can play inside and outside…I could go on and on.

As for the team on the whole, they won their group for this stage, and now advance to the hex where they’ll face Mexico, Costa Rica, Panama, Honduras, and Trinidad & Tobago. The first game of the round is coming up quickly, November 11th against Mexico in Columbus, Ohio. The top three teams once the hex is completed qualify for the World Cup, while the fourth enters into a home-and-home playoff with the winner of the Oceania region (likely New Zealand, but you never know.)

The United States shouldn’t have trouble, but then that’s no guarantee when you have to play road games in central America and the Caribbean.

-John Tortorella is leading Team USA at the World Cup of Hockey, and he apparently believes in punishing dissidents harshly. Truly the stuff of American values.

-A Filipino teen blocked a potential Steph Curry game-winner at a basketball camp.

This was the @mamuinthesea block on @StephenCurry30 that earned him his MVP merch. pic.twitter.com/3c46y93DNW

-Rob Ryan has apparently been the target of a string of robberies.

-Shaq thinks the center position is endangered in the modern NBA. Which I don’t necessarily agree with.

-#1 overall pick Jared Goff will be inactive for the Rams season opener. There’s something to be said for giving a guy time to develop, and some players need more time than others. But he’s been, well, horrible so far. You’d like to see more flashes. But then I just said the thing about some guys needing time, so I should take my own advice.

-Terry Bradshaw, a man paid for his supposed expert NFL analysis, has a fairly ridiculous (but predictable?) opinion about the identity of the league’s best quarterback.

-A look back at the best college football plays from Week 1.

-A deal was reached to ensure that southern California will get to watch and listen to Vin Scully’s final regular season broadcasts of Dodger baseball. I got a bit sad just writing that last part.

-The Bills did their own mean tweets. If we’re being fair, they should have all been directed at Richie Incognito.

-Troy Aikman just blasted FOX’s decision to hire Skip Bayless. That’s admirable. It’s always disappointing when people are forced to retract or make false apologies when they (accurately) criticized others who suddenly become their coworkers. Especially when it comes to Bayless, the man I once referred to as a “walking, talking amalgam of everyone you’ve muted on Facebook.”

-And speaking of skip, Ian looked at the debut of his new show. Which has plenty of Skip. Perhaps too much Skip.

-Apropos of nothing, here’s a sweet dragon kite:

Imagine seeing that thing swooping around. I’d freak out immediately. (And rightfully so, you can’t take chances when it comes to potential dragon encounters.)

-Big Papi took a swing at Donald Trump. Not literally, that would have probably been higher up in this column, and also probably illegal. (Though that might be a “not a jury in the world…” situation.)

-A German soccer team named their stadium after a fan who died of cancer.

-And in other soccer news, there was a match-fixing attempt uncovered, as someone reportedly attempted to bribe El Salvador’s national team.

-A PGA Tour player somehow lost his putter in the middle of Monday’s final round at the Deutsche Bank Championship, and had to putt out with his wedge. These guys are good. (And forgetful, apparently.)

Okay, so this is truly some nature education, and I guess if you’ve never watched a nature documentary you might be a bit surprised. I’d rate it TV-PG for violence and some disturbing images.

That pan down reveal at the end is just the best.

Head on a swivel, squirrel!