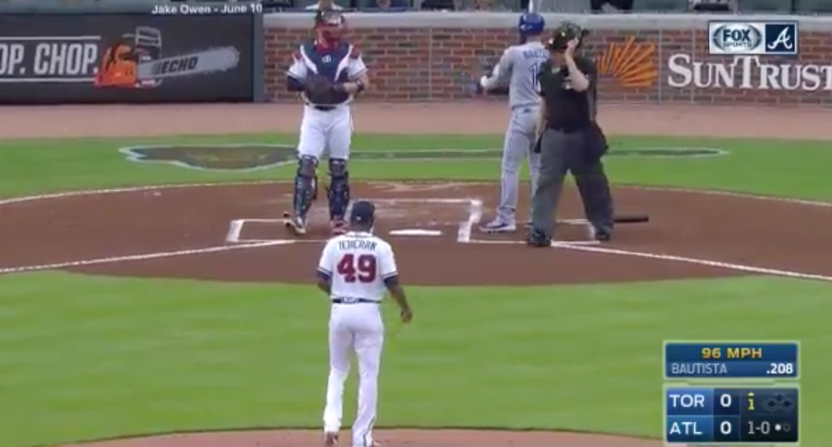 Apologies to any undead readers.

The Jays and Braves are still feuding

Because this is baseball, and baseball apparently means grown men acting incredibly stupidly, we get  things like Julio Teheran throwing at Jose Bautista in retaliation for stuff from the night before:

Because yeah, that makes sense. I really like baseball, but at the same time, it can be incredibly dumb sometimes.

Ducks beat Predators in hockey, if not in nature

The (formerly Mighty) Ducks were up 2-0 late in the third period and cruising along, right up until the moment they weren’t.

And then it got worse, with less than a minute remaining:

Welp, that’s bad. Still, because they’d scored those first two goals that we’re not showing you in this post because that’d be five hockey highlights, it was tied at 2, and therefore overtime was forthcoming.

And in overtime, this happened:

-That’s a fantastic gif. Hey, while we’re here, let’s dredge up the gif pronounciation debate because I have a few thoughts. I used to be firmly in the soft g camp, just because it felt a bit more pleasing to say. When pressed to defend this point of view (note: I was never pressed to defend this point of view) I’d note that “giraffe” is the same construction, and pronounced with a soft g as well.

But, now that I’ve heard so many people I respect use the hard g, as in gills (because I can only sound words out by relating them to animals or animal parts, I guess?), I tend to lean toward that one, although in a truly sad display, far too often I end up just saying both of them, which goes like this: “Hey, check out this gif, or gif!” (Those are two supposed to be two separate pronunciations.)

-Alex Rodriguez can’t help but act in really weird ways. It’s just him. I almost sympathize, except for that I don’t, really, now that I think about it.

-Apparently the Atlanta Hawks offered four first round picks for Paul George, and though it sounds odd, it makes sense for the Pacers to not take that deal. It sounds nice, in theory, but the Pacers have said for a long time that they’re not a market that can afford a rebuild, and George is or should be worth good talent that can contribute now. As to whether they should trade him, well…

-PG didn’t make an All-NBA team this year, meaning if he doesn’t make it next year, he won’t be able to sign a gigantic max contract, meaning Indiana goes into this offseason, and next season, unsure if they’ll have the kind of financial advantage they might need to prevent George from leaving for nothing. As a Pacers fan, I can say this on the subject: ;leagh;ewlhg;aewlhg;aewhgaw;k.

-The new LA football stadium now won’t be open until 2020, because of course.

-And somehow, that’s not the silliest LA football stadium news, as USC has sold naming rights to the Coliseum to, uh…United Airlines. I hope they did it just for the Internet jokes.

-You can now remove Netflix preferences from others, like, say, an ex.

-Kevin Pillar apologized for his homophobic slur, and it’s about as good an apology as you can make in moments like this. Unfortunately, it’s still not good when the best thing people can say is that you made a solid apology.

-Mike Golic’s son Jake is not happy with ESPN for breaking up Mike & Mike, despite his father being the less-talented of the two Mikes, which is saying something, as Mike Greenberg is a talking haircut. (That may have been a bit too mean. Mike and Mike have just been around a very long time. It had to end at some point.)

Woj Reports You Have Eight Months To Live

How is that not fake? How? It looks totally fake.

Reddit commenters compared it to the Paramount logo, which is great. They also brought up the Mitch Hedberg (I think, anyway) line, which I’m probably paraphrasing:

“I threw a boomerang once and it didn’t come back. Now I live in fear.”

Enjoy your Friday, and your weekend, if you get one.

(I mean that in the “not everyone works M-F” sense, not the “potential end of the world” sense, and I wish I didn’t feel like I had to clarify that, but here we are.)