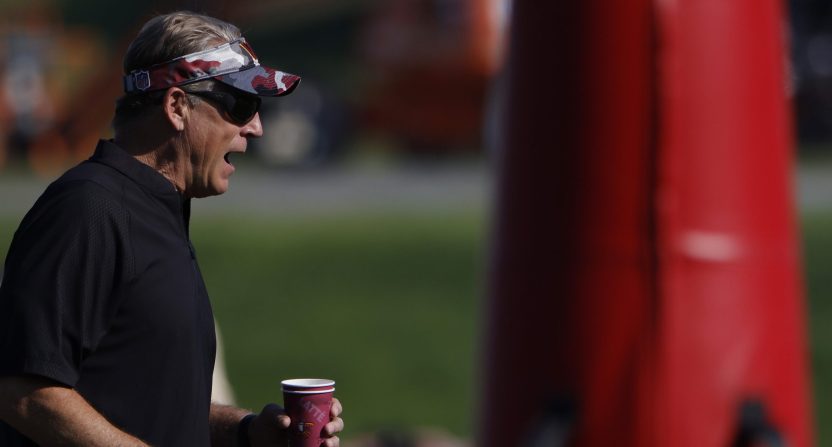 Washington Commanders defensive coordinator Jack Del Rio kicked up a hornet’s nest this week when he tweeted about, and later spoke about, his feelings equating the January 6 insurrection (a “dustup” in his words) with social justice protests and why one was getting what he seemed to consider was an undue focus.

After getting called out by some current and former players, Del Rio issued a form apology on Twitter. Head coach Ron Rivera also announced that he had fined Del Rio $100,000 and was donating that to help the police officers affected by the insurrection.

Either because he saw the firestorm he started or as part of his agreement with Rivera, Del Rio deleted his Twitter account on Saturday, in what is probably a smart move on multiple fronts.

The Commanders’ organization, which has been fairly quiet during this whole ordeal, had no comment to ESPN.

The whole drama added to all of the other issues and controversies surrounding Washington and didn’t do much to persuade people that it’s a franchise that has its act together. Still, the news that Del Rio seems to have faced consequences and has now removed himself from Twitter got a lot of people talking around the NFL world.

Keep your head on a swivel for aggressive burners https://t.co/4sY0jQ9Z65

Catch him on Parler https://t.co/eXmMQw2bSn

This burner is going2 be fantastic and I will identfy it by week 1 https://t.co/RjaQ0Oaw0W

Guess we won’t be getting more JDR tweets https://t.co/Dgov5Fd3P0

looks like someone's gonna have more time to work on that 27th-ranked defense https://t.co/aOs4EaVQxo