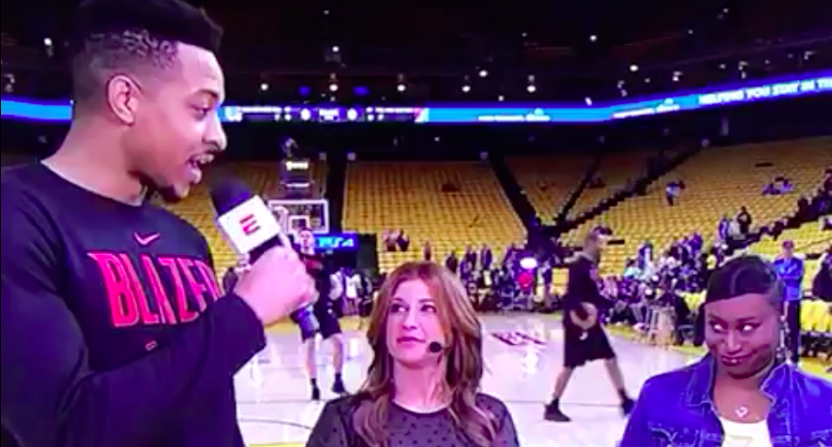 Back in August 2018, Portland Trail Blazers guard C.J. McCollum voiced his concern about the Golden State Warriors, who seemed to just be stacking up superstars left and right. After DeMarcus Cousins took a one-year deal to join Kevin Durant, Steph Curry, and Klay Thompson in Oakland, McCollum was asked about it on China Central Television, to which he said the whole idea was “disgusting.”

“I would never do anything of that nature. That’s disgusting. I’m not built like those guys. I was raised differently.

“I think some players will take that route, but most guys have too much pride, want to really win on their own or in their certain organizations and aren’t going to just jump the bandwagon.”

Of course, those comments stirred up a hornet’s nest on social media and McCollum started getting called out about them. One person who came at C.J. on Twitter was Jennifer Williams, a Golden State fan who simply told the Portland player to “win a playoff game then talk.” It’s the kind of comment most NBA stars would let roll off their back or simply ignore. Not McCollum, who responded in such a matter-of-fact, pure way that it demanded attention.

Indeed, the Blazers hadn’t won a playoff game since 2016 at that point, having been swept out in the two following seasons. So not only was McCollum’s response earnest, but it was also responding to a legitimate concern that he and his teammates had.

McCollum was true to his word. He tried and now the Blazers are in the Western Conference Finals taking on Jennifer’s Warriors for the right to play in the NBA Finals.  Naturally, that tweet has been bubbling back up into the collective consciousness. Not to mention that people have been checking in with Jennifer to make sure she was aware that McCollum made good on his promise.

The story became so ubiquitous (and fun) that ESPN not only tracked Jennifer down but brought her on the court before Thursday’s Game 2 to meet McCollum face-to-face and complete the circle.

“Thank you.” That’s McCollum showing his appreciation for the motivation as Jennifer sheepishly looked on, hoping for the best. Afterward, they shook and hugged some more as well.

In the end, everybody wins. McCollum got his playoff wins and pushed the Blazers into the WCF for the first time since 2000. Jennifer’s Warriors keep doing what they’re doing. And the internet won because the internet always wins.