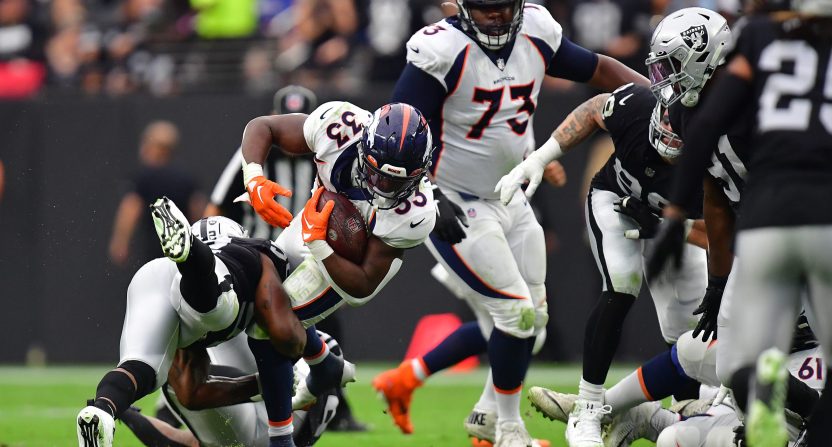 Sunday was rough for the Denver Broncos, who lost 32-23 to the Las Vegas Raiders. That was Las Vegas’ first win of the year and with the loss, Denver’s record fell to 2-2. When the game was over, the news didn’t get any better for the Broncos. Running back Javonte Williams was hurt in the game and the initial feelings about the injury aren’t positive.

Jeff Legwold of ESPN reported that Williams “left the locker room on crutches” and would get an MRI on Monday, along with pass rusher Randy Gregory.

Ian Rapoport of NFL.com later added that Williams “is feared to have suffered a serious knee injury. While the complete severity of it won’t be known until after the MRI, Rapoport added that “there is not a lot of optimism surrounding the injury.”

#Broncos RB Javonte Williams is feared to have suffered a serious knee injury, source said. He’ll have an MRI tomorrow to determine the full extent, but there is not a lot of optimism surrounding the injury.

Naturally, this news upset several people within the football world.

Terrible news. Will be an absolutely MASSIVE loss if Javonte is out for extended time. https://t.co/HomjOtDLOO

significant loss for the #Broncos given his toughness & versatility..they still have Melvin Gordon but Williams is a matchup problem & this injury comes at a time when Denver is just starting to build more of a rhythm on offense https://t.co/t3mj4tFNUv

There’s never a good time for an injury, especially to a player of Williams’ caliber. But the timing of this is particularly bad. While the Broncos lost on Saturday, the 23 points scored was their highest output of the season. Even in defeat, Denver might have begun to find some of the offensive rhythm that had been so elusive for the season’s first three games.

Among the many areas where the first-year head coach has struggled is in getting the ball to Williams. The second-year running back has logged 47 carries for 204 yards over the season’s first four games and added 16 receptions for 76 yards. As a rookie in 2021, he had 203 carries for 903 yards with four touchdowns. As a receiver, he caught 43 receptions for 316 yards with three touchdowns.