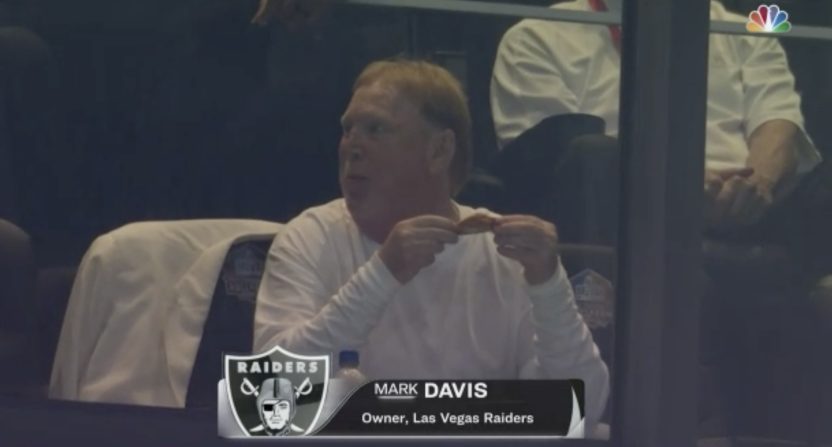 While it’s great to have football back in any capacity, NFL preseason games are not always the most interesting to watch with bench players and backups traditionally getting the bulk of the reps. But during Thursday night’s Pro Football Hall of Fame Game between the Jacksonville Jaguars and the Las Vegas Raiders, viewers got a surprising bit of entertainment from Raiders owner Mark Davis.

During Thursday night’s broadcast of the game, the camera cut to Mark Davis in the owner’s box of Canton’s Hall of Fame Stadium absolutely devouring some hot wings while bravely wearing a long-sleeved white shirt.

Bad day to be a chicken wing when Big Mark is in town. #Beast pic.twitter.com/Nx1ZXys5CF

While the shot only lasted a few seconds and seemed rather uneventful, it turned out to be arguably the highlight of the game for the NFL world. Several people took to Twitter to offer their reactions to Davis’ meal. Some noticed his choice of flats over drums while others discussed his decision to wear all white while eating such a messy meal.

I just knew Mark Davis would be a "flat" guy

You know Mark Davis just tosses his white shirts in the trash after wing night https://t.co/jNMa4OaYQp

Mark Davis being a flats guy is so #OnBrand pic.twitter.com/FnFJJhLG0I

God bless the cameraman and NBC producer who decided to cut to Mark Davis while he was eating chicken wings. MVPs.

While Davis’ dining proved to be rather entertaining to NFL fans, the game itself was quite the snoozer. The Raiders downed the Jaguars in what was a blowout for much of the contest after the start of the game was delayed for 40 minutes due to lightning.