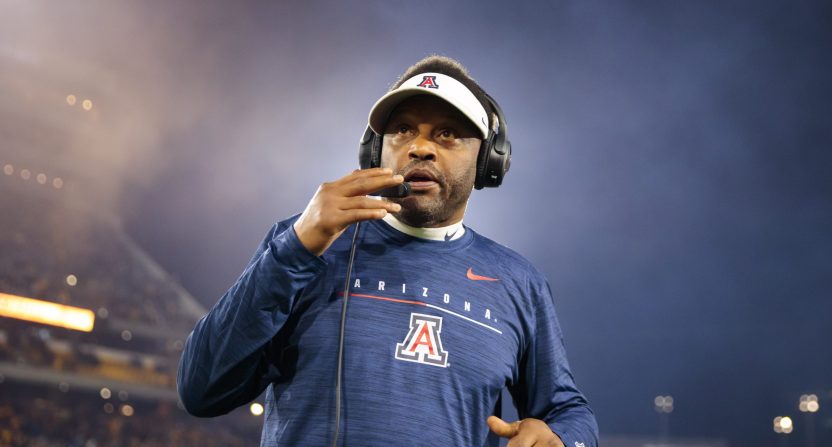 The former University of Houston and Texas A&M head coach Kevin Sumlin has reportedly found a new head coaching job in the world of football. Sumlin will take the head coaching position of the USFL’s Houston Gamblers.

The @USFL is hiring some familiar names to lead its teams, including Kevin Sumlin as head coach of the Houston Gamblers. https://t.co/aYP7k4WYbe via @chron

Tune-in to @TheHerd on FS1 tomorrow at 12pm ET / 9am PT for a special announcement about USFL coaches. pic.twitter.com/o7M2eeISgz

It is not surprising that we will find out about the coaching hired for the USFL on Cowherd’s talk show this morning. Fox holds a minority stake in the company that owns the USFL and Fox Sports will be the league’s broadcast partner.

While we will find out for sure on the rest of the coaching assignments for the league, according to Matt Young of Chron, the other coaches in the Southern Division will be former Auburn coach Gene Chizik, former Kansas City Chiefs head coach Todd Haley, and former Toronto Argonauts head coach Bart Andrus.

Sumlin last coached at the University of Arizona, where he went 9-20 in three seasons, including an 0-5 year in the pandemic-shortened 2020 season.

The new-look USFL will be split into two divisions. The Michigan Panthers, New Jersey Generals, Philadelphia Stars, and Pittsburgh Maulers will play in the North Division. The Birmingham Stallions, Houston Gamblers, New Orleans Breakers, and Tampa Bay Bandits will play in the South Division.