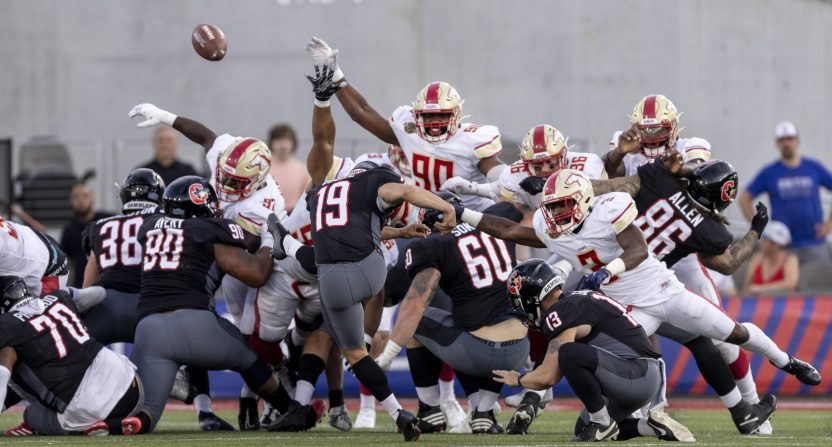 The USFL wrapped up Week 2 on Sunday and the eight teams are getting a sense of where they stand in the league. With a new league, and especially one that’s trying out some new ideas, things are going to be a work in progress as the inaugural season goes on.

That is apparently the case with the footballs. The footballs have sensor technology inside in order to digitally measure first downs but because of that, it’s believed that it’s made kicking the ball more difficult. So starting this weekend, the USFL switched out the footballs for kickers and gave them a K-Ball without sensors.

“Our specialists came to us with concerns about the sensor technology impacting the kicking balls that we were using during the course of the game,” USFL executive vice president of football operations Daryl Johnston said. “So starting this week, we will be going back to a more traditional, K-Ball structure in the USFL.”

The main concern dealt with the unevenness of the weight inside the ball. Kickers and quarterbacks in particular were unhappy with the balls, according to Frank Rossi on Twitter. With the added weight inside the ball that’s distributed unevenly, it’s screwing up the flight path of the ball. The USFL has come up with a solution for the kickers but not for the quarterbacks. At least not yet.

Did the move work? While USFL kickers missed more extra points in Week 2 (12/15 combined compared to 13/14 in Week 1), there was a noticeable uptick in field goals made in Week 2. USFL kickers went 5 out of 13 with the sensor-infused balls in Week 1. In Wee 2, the group was 10 out of 13 for a 77% conversion rate. That’s a rather small sample size but things seem to have improved. The kickers might be happier now, but after seeing this improvement, the quarterbacks will probably want the same thing. If that’s the case, the USFL may need to bring out the chain gang after all.