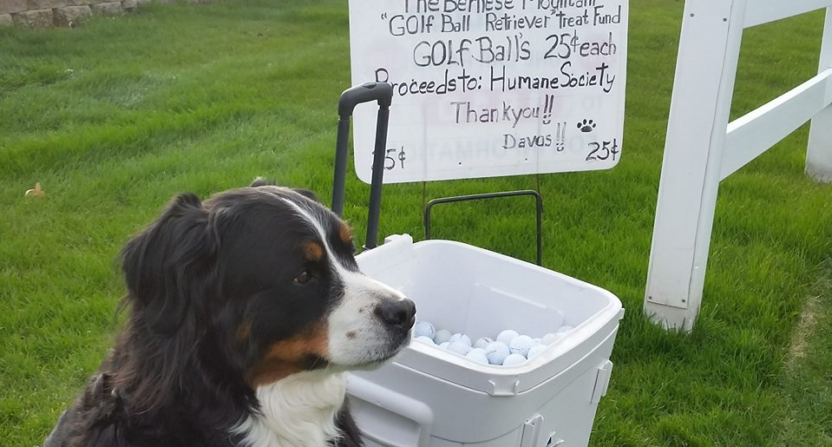 The world can kind of suck sometimes, but other times, there are very good dogs doing very good things to help other very good animals.

This is one of the latter times, thankfully.

Meet Davos (I’m choosing to think he’s named after one of the only kind Game of Thrones) characters, a Bernese Mountain Dog who has a very special skill: finding and retrieving lost golf balls.

That’s according to KARE-Minneapolis. Davos’s human, Al Cooper, likes to golf, but as any golfer of any skill level does, he lost a lot of golf balls. Fortunately his golfing buddy Davos loves nothing more than tracking down lost golf balls, whether they’re his owner’s or not. That gave Cooper an idea, which he just put into action this year:

Yes, Davos is raising money for the benefit of rescue animals. He finds balls that Al sells back to other golfers for $.25 apiece, with the proceeds going to a very specific charity. Via KARE-11:

This year Al got the idea to use the proceeds to raise money for the Humane Society after he saw how Davos reacted to an ASPCA commercial about needy pets.

Oh man, those commercials were hard enough to watch without thinking about how they could be making other animals sad too! That’s an exponential increase in sad animals! That’s bad!

Davos is such a very good boy that he has already raised a not-insignificant amount of money:

On Wednesday, after retrieving and selling 400 golf balls, Al and Davos presented a $100 bill to Deanna Kramer at the Animal Humane Society in Golden Valley.

Al says Davos has found and collected dozens of golf balls in the past few weeks and plans to make more donations soon.

He just brings the balls into the cart and drops them into the back! That’s amazing! And honestly, even if I was golfing and a dog took a ball he wasn’t supposed to, I don’t think I’d be the slightest bit mad. I’d gladly pay $.25 to just to pet Davos, anyway. (Now, if another golfer took it, that’s something else entirely.)

A dog raising money for other dogs (and other animals) might just be the one of the best things out there.