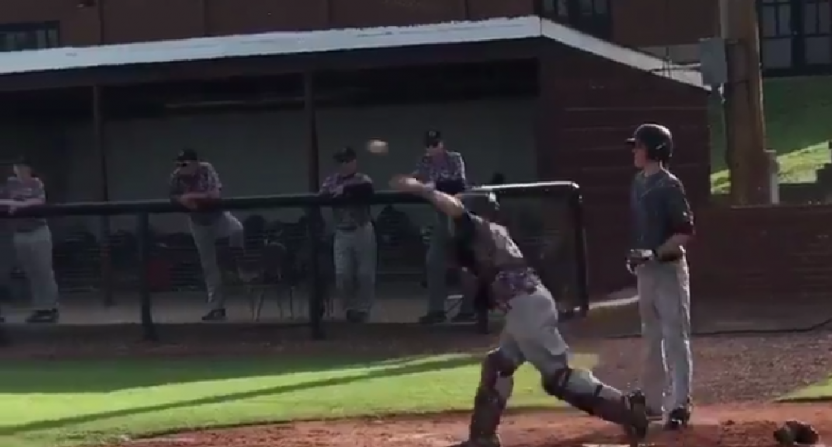 Every once in a while, a sports-related story comes along that both inspires you and, if you’re anything like me, makes you feel incredibly guilty for every time you’ve ever taken the easy way out of anything.

This is one of those stories.

Luke (Terry) is a 14-year-old eighth-grade catcher at Cornersville (TN) Middle School. He also has only one arm. Let that sink in for a moment.

Luke had his right arm amputated at 19 months. He had contracted E. coli and it eventually attacked the arm.

…Dana (Terry) said her son flatlined on the operating table three times during that time in his life.

He refused to give in even then.

Okay, so this is obviously an impressive life lived by Luke, but how in the world does he catch, you might be wondering? Well, it’s sort of like a much quicker version of what Jim Abbott used to do on the mound:

He’s made catching an art form. Luke catches the ball from his pitcher, flips it at approximately shoulder height, dropping his glove almost simultaneously. He grabs the ball in mid-air and throws it back to his pitcher, or to a base if someone is trying to steal.

Big shout out to cornersville's middle school catcher. With the use of one arm, this guy is getting it done. What a stud. pic.twitter.com/4rhPycFGyY

Look at that pop time! He’s basically executing a barehanded double play turn every time he makes a throw down to second, or presumably back to the pitcher as well. Credit Luke, and also whatever coaching he’s received over the years, even if all his coaches have done is believe in the talent of a kid with one arm.

He also normally hits in the top third of the batting order, swinging from the left side with just his left arm.

It’s an incredible story that continues to be written: next year he’ll be trying out for the high school team.

As should be obvious by now, you shouldn’t bet against him.